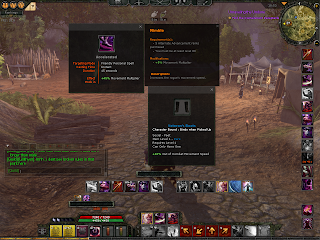 Ah the accelerated. This is  probably the most assassiny or assassin-a-like feat we have. What it does is granting you 45% speed bonus for mere 2 shards. That's it.


1/3 or 3/3
This is one of those feats that you might want to max out. I am firm believer that you should take full advantage of this feat since its pretty unique both in pvp and pve. You want to be the best at what you do and speed is of the essence.


Stacking
You can stack your speed bonus. Use accelerated (45%), get nimble perk (passive 5%)  and wear those stylish veteran boost (10%, but only out of combat) to become the speed demon. No, seriously check the video below. That's assassin in a nut shell.

PVE survivability
Accelerated will allow you to quickly run away from mobs if you are low on HP or grossly outnumbered. Run away with this speed buff while sprinting and hitting your key under which you have bound your hiding. As soon you will get out of combat you will hide and shake off any remaining mob's aggro.
In group pve accelerated might come handy when it comes to getting away from boss until the tank recovers his aggro-hold on him. You can also take down one mob and use accelerated to keep distance from other mobs until your stamina/hp/shards renew, get another one down and repeat.

Mount speed
Accelerated stacks with your mount's speed. I know what you are thinking: tiger mount! *nods* Yes, you can get across the map disgustingly fast with accelerated and tiger. Great not only in pve, but also in JS minigame or...*sigh*.. yes, Bori.

Sneaking
Accelerated will work while you are sneaking increasing your stealth speed. Be aware thou that using accelerated while hidden WILL POP YOU OUT OF STEALH. Use it first and then sneak.

PVP flag carrying
Drop accelerated while carrying a flag for sweet sweet bonus to your speed. Both second wind and lotus overdose will come in handy to replenish your stamina. When it comes to raw speed assassins with accelerated can capture flags before other team even realises what happened. Just remember: its for ninja-ing the flag, it won't do your team any good if you have speed buff while engaging your opponents.

Exploration
The faster you are the longer you will jump. Just do a simple test with normal and swift horse and you will see that swift horse can get your in places MUCH MUCH easier than normal horse. Accelerated will give you that extra something to make that difficult jump a success. This is why assassins are BEST explorers around and nothing beats the feeling you will get by getting on high building and doing /squat

- chasing down the opponent - the woe of pre 1.6 world was assassin jogging after caster, trying to catch up and often failing (for stamina related reasons). With accelerated there is no class that can run away from assassin.

- closing with the opponent - While FTD might be the most obvious choice it won't do in every situation. FTD requires, unobstructed straight patch to your opponent. Great example on when to take advantage of accelerated in HV map where rangers/casters will position themselves on the ramps just above the center and then *pew* *pew* *pew* away.

- avoiding the hits - accelerated makes your really hard to target with combos, especially if you are sprinting all the time.

- avoiding CCs - this is probably less obvious use. There are many classes that will use their stun/kb asap as they get out of your CC. Barb, Hox and DT being prime example. You can use your GC+Soul Strike and then apply SDS and with accelerated you will barely have time to spirit away out of CCs aoe range. Once safe you can throw your lotus dart and feel bad ass about it.
Posted by Slith at 12:38 PM