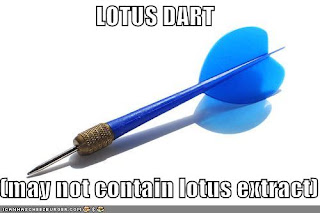 Perhaps the most misunderstood miasma of all: the lotus coated dart is also known as lotus dart. When lotus dart is used with Slow Death Strikes it creates DoT called Lotus Toxin: Deadly Venom, and if Grim Corruption effect is present the Lotus Dart will trigger Lotus Toxin: Grim essence. Wow that is a lot of lingo to memorise!

This is why people refer to both of those effect as simply "Lotus Dart" calling each of those "Lotus Toxins" as Lotus Dart + SDS (slow death strikes) or Lotus Dart silence (lotus dart + GC). 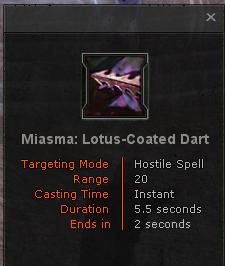 Lotus Dart
This miasma is our only ranged attack. I mean "attack" is really too big of an word: on it's own, without any poison present, it puts a DOT on your target and ticks for mere couple of hundred damage. Really, you can call yourself lucky if  you get 500 dmg out it if. In comparison other miasmas are superior: face stab on it's own does 1 x damage which can easily crit over 1000 dmg (on players!) and soul strike can crit up to 600, but more importantly it applies holy/unholy debuff that can be stacked. So what can you do with lotus dart alone?

Pulling - I find it a great tool to pull mobs with out switching to cross bow. It is very fast (instant) and has quite a reach.

Chasing - it can be useful if you are chasing after someone in open world PVP. If your opponent runs long enough unmolested he can re-stealth which pretty much makes your kill go bye-bye. Throw lotus dart at him and he will again be marked as in PVP so not being able to enter stealth.

Lotus dart + crossbow - man, that is REALLY reaching for it, but yeah the sweetest kills you can get in PVP are those made with crossbow and since you can use your dart while holding and shooting crossbow why not add those pitiful damage numbers to whatever you can do with your ranged attacks. 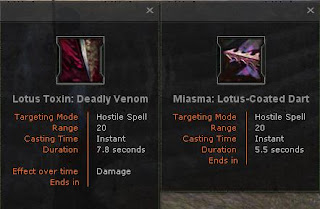 Lotus dart + SDSIf the dot from SDS if present on the target (it will stay only for 5 seconds) and Lotus Dart is used then SDS dot is consumed and replaced by two new dots: Deadly Venom and Lotus Dart crappy dot. What is the main difference between SDS dot and Deadly Venom apart from damage? Well SDS does unholy damage and Deadly Venom is poison damage which means it is checked against armor. This means that deadly venom will take advantage from armor debuffs like burden to bear. Back when patch 1.6 that brought assassin revamp was on test server deadly venom did so massive and constant damage that your screen was almost blocked by flying damage numbers. It was nerfed pretty badly. Nevertheless it is still a very potent DOT. You can get 2 upgrades for this:

Steeped Lotus Extract - +15% damage and +10 spell critical chance. It is decent, but essence detonation gets one more stat which is Spell Critical Chance. This is why detonation based builds are turning out more devastating damage. It is decent upgrade, if you are going to invest heavily in lotus tree then take it.

Baneful venom - this is a second dot that gets added along with SDS dot. The trick is that Lotus Dart consumes only SDS dot and Baneful venom will stay. I like this upgrade.

Vile Corruption - this adds instant unholy damage when SDS dot is consumed by Lotus Dart. It is like mini (and I say MINI) detonation on top of your dot. I like this upgrade better than Baneful venom because it also works great with Face Stab. Face stab does instant damage and this Vile Corruption is in sync with it since it is also instant which creates great spike.

When the target has low armor - with armor up to medium lotus dart will have better effect than with heavy/full plate.

When there is high chance the target will run - I wouldn't count on Dark Templar running away from assassin, but you can pretty much expect this from ranged casters and rangers. The problem is that your target can be running away as you are going through your grim corruption animation which means the opponent will be far out of reach of your soul strike miasma. Same is not true for lotus dart: not only you can use SDS rank II to apply DOT super fast (it has no effect on how strong the DOT from dart will be), but also with dart's super long reach you will still be able to consume the dot with your miasma. 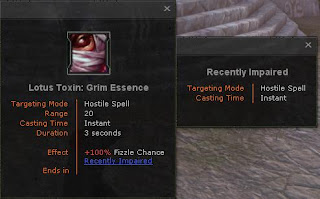 Lotus Dart silence (lotus dart + GC)
It lasts mere 3 seconds. Really, it is a waste most of the times. I guess it has it's uses when it is bundled with SDS so your opponent has both DOT and silence on him, but when it comes to quickly silencing your enemy I still favor Choking powder perk
Posted by Slith at 8:29 AM