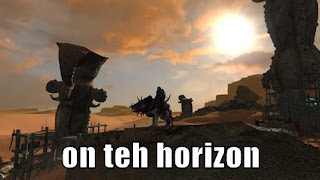 I am here to bring you the latest and grates info on what is coming down the pipe:

The Coils of Ubah Kan dungeon looks like live ready (almost) and it is already itemized. Since I know that is all you care about here are some fresh screenies of epics and blues:

The difference in health is +72 HP and whatever stamina loss from constitution is mitigated by +25 dex.

But we are talking here about +0.67 DPS difference, but still an upgrade and a way to gear up faster than "kill & pray" Yag runs.

The dungeon has several bosses and looks neat. 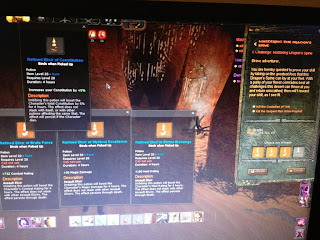 More so there is now a new quest in SDS that will reward you good blue pots for killing the bosses. I don't know if this will be an incentive alone to go into dungeons, but it's good that the Devs even thought about offering a little more than in Khitai.

What else do we know?

This is great news, not only epic drops are guaranteed, but also clearing up trash can get you extra drops (like epic hands from Wyrm dungeon). Seems like Funcom decided to that Wyrm won't be re-designed (too bad IMO), but people will still be able to get it's loot via trash mobs in Coils (source).

But the exciting news keep on coming:

We get to learn a lot from this post:

What about the mergers? According to this thread paid server character transfers are as of now disabled because of pending merge. This was supposedly confirmed my a GM.

Mergers in September? Could be!
There you have it. I think there is a lot to be looking forward to.

Good stuff, looking forward to it :)

Little note on the hands; we got more then one set of gloves now but none of the ones that also drop in Wyrm. This leads me to believe that only the hands from the new sets will drop in Coils and the other hands are still only obtainable from the last boss in Wyrm. (we might have some groups left in Wyrm then trying to complete their set)

Trash mobs also drop major pieces, we had the barb pants (superb pants btw) drop from a trahsmob in the tower.

We also had boots from a boss so sofar we have had epic loot from 3 different bosses (2 last ones and Unknown) and one trash mob and the guaranteed drop seems to be epic legs from the last boss.

The point 3 is incredible. They should have made a post about it on the announcement part of the forum.