PvP Events - not so hot 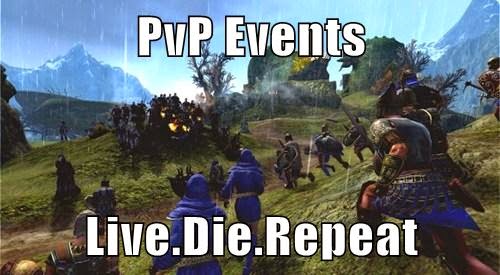 I didn't want to post about Festival of Bloodshed until I have taken it for a good spin (Bori taught me that impressions can be deceiving). My verdict: I don't like it in it's current form. I am not claiming to be objective on this matter, but when it comes to my personal opinion I want to be honest in here: it is a cheap content done in a sloppy manner and it doesn't address my issues with the game. Not even Funcom denies that this content was cheap to produce and it really shows. But quite honestly I have a low expectations for 6 year old MMO when it comes to budget and resources allocations (even more so now that AOC doesn't have it's dedicated team). Still I cannot overlook the sloppy implementation of the events and by that I mean complete lack of any UI and visual indicators that would allow me to have a basic understanding of just what the hell is going on. You see all the information about the events is feed to player via on screen messages and system whispers. That is just less than elegant. Any revelant information is usually served to me with just tons of text clutter informing me that I might not have enough soul shards to perform something. Things like score goes into whispers which is even more messy. The result? Things like arena events are just blood baths in which you "Live.Die.Repeat" (in true Edge of Tomorrow fashion) with your guildies asking over TS: "is it over yet?", "is this still going?" How the hell I should know?
To add insult to injury whatever class balance issues that are present in minigames are magnified ten folds when it comes to open world pvp. My recipe for utter destruction? Take soldiers, and some healers and just a pinch of ranged damage (Necro for 30s dots is preferable). Arenas are just rogues chasing casters while getting their asses pierced by ranges with soldiers just racking up the kills. There is no respawn downtime, no limited lives or any structure to those "arenas" so if you die just respawn and run back. Live.Die.Repeat (unless you are a soldier and in that case just live).
Furthermore you have to take just absurd amount of quests from Picts NPC instead of those quests just spawning when the event is active (minigame style). Since I am already crapping on Picts I might as well go all out: I think that it was a horrible decision lore wise to use Picts for these events. It's a pet peeve of mine but seeing skin clad, body painted, gruesome savages that Picts are just HANGING OUT IN in Tarantia Commons with the locals is dumb. Funcom have always treated Conan source material with respect and this is first time in 6 years when I am actually upset about the story, writing and the implementation.

But I can stomach all that. Class balance was always out of whack and the PvP Events got a lot of fixes and updates which is a nice change from Bori. My problem is being capped on gear/AA/pvp lvls. I have absolutely zero incentive to do those events. This is still a MMO and it needs progression.
I could just repeat every point that I have made in "No progression" post and it would be as valid as it was a year ago.

Conclusion PVPers are never happy no matter what content they are given.
Waste of time, money and effort

How much of PVE enoyment T3.5 raid gave people? Didn't the raiding crowd scream that T3.5 is a waste of time and resources?

And does Funcoms still spend money and resources trying to fix T3.5 in terms of difficulty and loot?

Oh and Lurker raid...I think PVErs were pleased about it too...not.

Maybe it's time to play another character after all? This will fix lack of progression problem. I did that and it's working to some point, I even like my new char more then the old one. As for your thoughts about pvp festival you pretty much nailed it.

But alas my friends...I cannot

Assassin runs deep in my veins and I cannot change my wicked ways.

and by that I mean I am not re-rolling after 6 years ;p

Also T4 pvp is around the corner..that might fix it for me

You comment was a bit harsh, but it is still true.

I am fully aware of the reality of this situation and the slim chances of it ever improving. I just have tough time letting it go. After 6 years I think I just want to be that guy that will be able say "I was was there when the servers shutted down and FC pulled the plug on AOC" (why? To impress some weirdos on twitter, obviously).

By this point I am ready to admit that I am playing AOC by the force of habit alone and engage in it compulsively and without joy.

On the other hand AOC has to be the least time consuming MMO out there because I am hardly playing it nowdays. That is a plus in my book ;)

I'm sorry Slith if it was a bit harsh. I certainly did not mean to insult you. I should not have questioned why you still play the game. At least the pvp side is not completely static.
And I completely understand the "hard to let go" part of AoC. Especially if you are one of us that have read ReH books. I admit I still check the forums regularly, but that's it for me. Oh, and I kill the world boss a couple times a month. Even that has become a chore.
All in all, I hope you do keep playing the game until the very end. I truly do enjoy your blog and I hope to continue reading many more posts in the future.

I absolutely did't take any offence and if anything I like that you comment is so straightforward. Sometimes the truth just can't be put into nice words.

You are right about the REH and the Hyborian setting. It is FC's biggest asset and without it the game would have been gone by now. Lets face it, I wouldn't have put up with even 5% of the crap I did if this wasn't age of CONAN.

Warhammer online was a great example: they had good lincense, but not GREAT one (which AOC has) so WH is gone and AOC will be around for the years to come. Both of those games launched around same time.

Thats what happens to me. I love REH, i have a collection of books, comics, figures, like yours Slith, and im still playing some days a month.
Im not a true Pvper, want a mix of pve-pvp but lately im only doing pvp cause there's nothing left for me in pve (im in Clan of the Free City, full T4 sin and bs) so i played with you on some raids ;)
I think the game is dying slowly. How many times have you read that? a billion. Mostly trolls. But it is dying. As soon as fc moved servers and stop having a dedicated team to improve or add more content to the game thats when you realize that the game maybe is not dead but undead, and its better years have gone forever.
Once you play five minis in a row in a pvp server that takes a long time to start, against the same guys (some of them old "fanboys" like me) and you can cross any area without seeing anybody you see that the future is getting darker and darker every day for AOC.
Maybe t4 pvp gear will add some interest for us, but i really doubt it. The pvp event, for me as for you Slith, is a big dissapoint.
I did cancel my sub six months ago and i really dont have any kind of incentivation to renew it.
At least i hope they dont plug it off too soon. The pvp in this game, with all the unbalances, is still the best one i have ever tried.