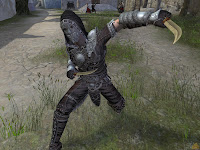 Here is a short guide/information that I have put together so people have easier time adjusting to 1.5 reality. This is in no way a detailed guide, for details go to past patch notes
http://forums-eu.ageofconan.com/forumdisplay.php?f=6
Combo mechanics
You have to "land" every combo "step" in order to deal 100% damage. If you miss one combo step you will see one of combo's "arrow" light up red. Missing a combo step will apply penality of -5% damage.
Game mechanics
Dubble tapping and using active block no longer gives buff
Dubble tapping backwards puts evade buff on cooldown

Grim corruption
a) it applies snare
b) it applies debuff. Debuff type is dependant on stance in which GC is applied.


There haven't been any great changes to assassins. It safe to say that your experience and "feel" of this class will remain mostly unaffected in 1.5.

I heard news from my friend: Slith - joining SCUM. A big disappointment. I have always respected you and your actions and you have inspired me even though I am just a little assassin from a RP guild.

It is sad that some people, like Slith now, don't realize that scum is a ganking guild. I know you don't tend to shit talk, gank and do unfair pvp or make other playrs gaming experience miserable but that's what SCUM is, what it was designed to be and what it still is. Maybe it's not the same at 80lvl but I have read scum suck there because they don't have the leverage of mass anymore. Maybe you should try to level up some alts to get the best imagine of this.

Trully disappointed, trully. I don't feel like to read this blog anymore.

sorry to disappoint you. I had my reasons for leaving SA, which is btw a great guild. I know SCUM members for a long time, talked with many of them and even teamed up against Empire in my sad sad days in Kesh. There is a lot of missconception about SCUM and personaly I have never seen them doing anything questionable or talking shit.

I hope that you will find it in your heart to forgive me and keep reading my blog.

Hi Slith, what do you think about dumping 5-lethality for 3-Escape Artist and 2-Brutality for levelling in a pvp server(Lotus/general)?

PvE side I will find difficult the solo instances with Lotus/General as you wrote in a preceeding post or this is changed after 1.5.3?

Thanks and keep up the good work... best assassin blog I've seen!

I have made new tag: Questions

Hey Slith, great guide as always!
I was hoping you'd do something like this since many returning players are really confused if they havent played the game for 6 months or more.

I dont want to nitpick but there is some errors that I want to point out:
a) Flesh rot - .. (We are meaning Flesh Necrosis here, arent we?:)
There is also some minor errors like Lotus "overdoes" and such..

As for Slith joining SCUM, it was unexpected (for me at least:P), and I have little respect for SCUM in general. I hope you wont change your unique playstyle and most of all continue your awesome work with community. :)

Gotta' have my eyes on my back for you now, I guess. :P

Thanks for finding my errors, corrected them. That is always appreciated.

as for SCUM - I hope it will turn out well.

I'm not really happy about that SCUM shit either but gotta admit that SCUM is not the same as it used to be. Previosly it was a guild of assholes - now 25% of scums are there for pvp exp, 25% for friends and the rest to be assh0l-es.

In RP, who would ever want to join called Scum? Why not to join a guild Rowling retardz...

I once was an officer in SCUM.
I know how those assholes work.

And btw Slith, you still need to show me new cool places in Khemi and Common District.

Yup, welcome to SCUM Slith. Land of free for all PvP. No NAPs, no Alliances, no KoS lists to worry about. RED = Your choice what to do.

Like yesterday we was grouped and PvPed with Band of the Grey Gloves.


PS. None of SCUM officer haven't joined to different guilds so far. Couple have quited AoC.

Galadh I agree with you about this:

RED = Your choice what to do.

But this is a mask. In real game the "choice" for your little group is only killing a foe during a solo PVE in the Commons

Often your little band at the Commons remember me the Celestial's style..arrogant in group..prey if they play alone (but only few respectable member of your guild have the umility for this) :)

For Slith I have great respect for you always (like Dranoth) SCUM or not SCUM..hope to see you again fight alone like a true sin

I found an error :

This is wrong. I'm not sure about active blocking, but I'm certain double tapping gives buff.