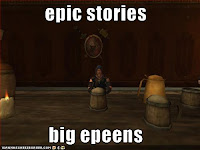 This story won't be about how stupidly boring AoC has become (this is what happens when you take 6 months to develop RPG system, and one area with nothing but bland, gray buildings), but it will be about assassination.
There is absolutly nothing worth mentioning on any other medium than twitter so enjoy this story:

Today I logged into guild city to check trader. On my arrival I was surrounded with necro pets and needless to say - went down like shot a vodka on an empty stomach. After respawning infront of our Keep I stealthed back to trader only to see that there are two necros: petzer and bomber (for the record: they were from Tasyfa). Did my best: charge in, knockback, SS buffed with Overdose and curse of lotus - that brought first necro down to 50% and I was already dead at this point.
Respawned and stealthed just outside the gates. Ofcourse the "merry" couple of necros went straight for the Keep's respawn point to gank my ass. 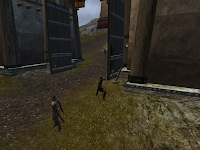 As they were searching for me near the Keep I have unstealthed, closed the doors on them and ran like hell to restealth. People from other guilds can't operate your guild's doors switches so they were stuck inside. They have quickly figured out that they can just jump down the wall and they did...right infront of me! With necro being already down 50% (fall damage) I was able to kill the first one before being bombed to hell by second one who - after killing me - bravely ran away.
This little "trick" I pulled on poor necros made me smile.

Matter of fact I might do few of post on my stories alone: don't worry, I have a couple of good ones where I got OWNED so it won't be just epeen stroking.
Posted by Slith at 10:56 AM

hehe, well, we knew, you were there, stealthed at the gate, because we have seen you from the top of the wall, you know :) what my guildie probably didn´t count with, was the amount of fall damage, 50% is as bit over the average .. gj using your antiCCs anyway, you deserved that halfkill, i guess :) then, after killing you, i was waiting at the gate for a while, nothing happened, and as i didn´t want to spend the rest of my youth at someones locked gate, i decided to head back out of the city .. while passing tradepost, i noticed you running after me, then you stealthed, i stopped at the outer gate to place an AoE, so you got plenty of time to charge me.. well, if you´ve had got any balls, of course ;) but enough about my epic story, big epeens ep. 1,5

PS: greetings to some of my favourite scumlings: to the masters of passive resistance Donpadre and Forza, to Jamamkoule (means Ivegotballs in czech) Butivelostthegatekey, to "make love, not war" hippie Zabeya and many many other

oh my! Looks like I haz readorz from all walks of life :)

I think things went sligthly faster from my perspective when i was stealthed near the trade post.

its not like necros are a real class anyway :D