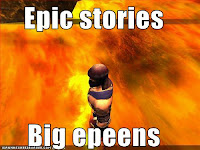 Tarantia Noble (nooble) district used to be occupied by a guild named Captain Morgan Society
Zubba, their guild leader if I am not mistaken, would stop people traveling through zone and ask them for a payment for a safe crossing.
Needless to say hardly anyone was paying so heads were rolling and general chat was spammed by whines of people ganked in that zone.
Once there was a pvp event held in Tarantia which I have taken part of. Many guild showed up for this.
So I was approached by Zubba and kindly asked to pay up some sum - I can't recall how high it was exacly, but it was more than few silvers.
Not only I have refused to pay, but also gave him /rude gesture - I was sure that I can take him on in 1v1. All of sudden, and I shit you not, 8 people unstealthed around me and beaten me into a bloody pulp. Before anyone could even notice - Zubba and his crew have vanished into other parts of the disctrict.
Like R.E. Howard wrote:

Civilized men are more discourteous than savages because they know
they can be impolite without having their skulls split, as a general
thing

Slith of Aquilonia learned the savage ways of Captain Morgan Society the hard way.
Posted by Slith at 9:38 AM

Oh the good old times with the Captain Morgan Society and later known as Alcohol Fueled. I admire how much attention under 10 man guild got. I think at least 90% of server hated them really really much. :)

Zubba is the GM and he was pretty nice guy also. Heard him couple times in ventrilo and he sounds like 50 years old Pirate (He is 40+ someting). I pooped in my pants couple times when he popped in Ventrilo on yelled suddenly "YARRR! HEY METAYES!"

My first guild was the fallen guard(also known as the rowling retards) and the guild used to be Captain Morgan society's archenemies. We had guildcities in the same instance and those morgan bastards used to go and harvest all basalt etc around the guild city! We also had some fights with them more than often.

Even though I used to hate them at that time, I now like them, they were really something special.

Especially Zubba was the toughest guy there. He was known as "The worst barbarian ever" because he lost 1vs1 even against 60lvl players : D

Hijacking The Fallen Guards identity, was the funniest moment for me. Was a barrel of laughs whilst it lasted :)

Ahhh....t'was a glorious time in the Golden age of Conan. I enjoyed the massive fights we'd often end up having in Nobles district.

If only they'd have just paid, would have been so much simpler for us all.

I was one of Zubba's "gay ass healers", i felt honored to be able to continuously regenerate the health of my glorious master.

The Fallen Guard were absolute cards though, i was so glad they were in the game. Daedalus was a grade A clunk of course, but what a hilarious character!

Oh...and them getting stuck with "Rolving Retards" nearly gave me a heart attack, i howled on the floor for days. Legendary stuff.

I truly LOVE the quote you used :

Civilized men are more discourteous than savages because they know
they can be impolite without having their skulls split, as a general
thing