The community is going to shitter 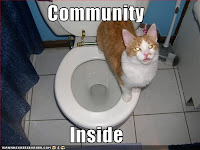 This was supposed to be a 2 part post on how all of sudden everyone is an expert on assassin in all of its development stages.
Bist du expert assassin? Clearly everyone on assassin forum can anwser "OUI". And I don't think it is an epeen issue were I am god like and everyone else is a vermin, but when freshly rolled insta-50 assassin which took his time to grind up to...lvl 51 starts complaing I don't really know what to say. I don't post much lately on forums. The reason for that is I am feeling very very disconnected from what assassin community has become. Back in 1.4-1.5 we were this menagerie, a gathering of people passionate about one specific class. Just as 1.6 went live the boards got turned into this
whirlwind of complains, trolling and misconception. Posts of people I know are swept under an avalanche of bullshit coming from people who clearly rolled assassins recently or dusted off their assassins from like 1.3 era.
When I have saw the claim that 1.5 was "the killerz skillerz" and 1.6 is ez-mode I have almost got an hart attack: where were those "killerz skillerz" in 1.5? I have seen only handfull on boards and a couple of assassins on servers. Of course there is always a temptation to warp yourself in "assassin veteran" flag and spit on newcomers/resubers/latercomers/newbies, but what good will come out of doing so? There is no value in that nor it will bring back that old sense of community. I think assassin players have to do what they have always been doing so far: endure and in enduring grow strong. Eventually the trolls will get bored, the chronic rerollers will ....reroll next revamped class and the inexperienced ones will gain in game pvp-wisdom.
To be honest I am not THAT worried that the above mentioned process will take loads of time because assassins have three fatal "flaws" that will eventually make people go back to their mains:
1. PVP gear dependant
Unless you are sporting a full T3 (T3 has protection stats, right?) you will burn like paper when facing casters. In 1.5 you could justify wearing T2 over pvp gear because of armor and benefits coming from unholly armor. With no armor bonus the pvp armor protection and it's synergy with corrupted body is what saves the day. And what if you are wearing only culture armor or less? You are fucked. Since getting pvp gear is as hard as ever I can't see many progressing fast with their assassins.
2. Survivability
I personally can't see anyone used to the Conq level of survival or even demo going cold turkey and switching to class wearing paper armor. The "lower dps and buff armor" threads are really showing that trend.
3. Melee
The cute demo/necro/tos rerollers can't really handle melee, especially one with shortest ranger and weakest armor in game.
Posted by Slith at 2:03 AM

Indeed, your words pretty much sum up how I feel about this. I definitely miss some sort of sensible discussion about all the new stuff, but at the moment it's impossible to have one, at least on official forums.

People went from being ecstatic/enraged about the new 1.6 "OP assassin era" to posts like "less damage, more armor" and "class has lost it's 1.5 depth" in a week. At this point I think most people are just annoyed that assassins can kill them now if they're not careful. The reasons you posted are valid, so I think it won't be long before the haters and trolls get tired and move onto the next thing.

agree! hey, slith. maybe we should start our own forum?:D would be so nice NOT to hear from Nodibook especially:p or we could just have a forum here? i dont think there are so many new sins following you?

I thought about creating a forum under www.assassinshideout.com for assassins only and with invitation/recomendation only

it could be kinda cool with that. then we actually can talk serious without people that rolls a sin just because of the revamp.

You realy should.
I didn't bother checking the Sin forums anymore either. too much trolling and whining for me.
Also your realy talking the truth.
I've seen ALOT of Sins who just suck and have to get used to playing a melee class.

Ok I am sold on the idea

anyone can recommend a site that hosts free forums, but also offers premium paid services?

Slith, I made for some time ago (1.03 era) an assassin blog with forum for my guild, and we can use it.

a comunity only for assassins!!! ò.ó

I think you should make your own forum Slith to have full control. Lets google and see that we can finf :)

Haha, it looks scary indeed
We'll hear from Slith the great if we'r moving there? :P

i think it looked awesome:D and its from the Dark Brotherhood in The Elder Scrolls IV: Oblivion. Love that game:D

Simple machines forums (SMF) are free, easy to use and best ones out there.

I get a virus scanner Alert when I go to http://darkbrotherhood.co.cc/ ?

this blog is from hell!

the new forum need to fit us. Just a blank forum with "Assassin forum" on the title is boring. Why ppl should join a forum like this?

"Hell! It's about time!" to renew my sub to enjoy the game again and to join the forum :)

An EJ type forum is definitely a good idea. All you need to do to keep the community "pure" is to relentlessly flame everybody with even a remote idea to troll...

Well.. An elitist forum designed for sins, would greatly increase the adult discussions about the class and the mechanics, though you would isolate yourself from the burning bile of pupblic forum, and thus avoiding the attention to any devs reading..

On that note. Finding a webhost, to load your forum on to, or even finding a forumhost that will allow you to play around, shouldn't be to hard. Have a peek at http://www.justhost.com/. Should be able to have webpage, forum, blog, ftp, and whatever other goodie you can find. And it is cheap!

and I really love that dark brotherhood site... very nice work, and I /prostrate in your general direction...

So basically what you are saying is that assassin is not easy mode now ?

I mean seriously you must be kidding, I see biggest newbs that could not play ToS when it was OP playing assassins now and actually destroying other players.

Most of old sin's don't even like to play the class as there is a reason why so many rolled sins now and sticking with them.