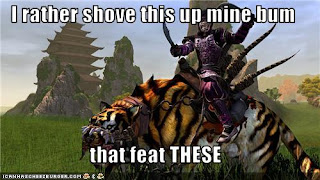 After 1.6 there are only handful of viable builds, the rest is just gimmick. You can check out comprehensive build list right here http://forum.assassinshideout.com/viewtopic.php?f=5&t=47.

So does it mean that I shouldn't pick feats that I like for my build? I have been an advocate of "specc what you like" for a while now, but I highly recommend being picky about your set of feats: not all are worthy.

All of the following feats are working, bug free and with proper tooltip - they are just not good enough compared to the rest. Feating them in will create a scenario where you are willingly lowering your DPS/survivality for mediocre gain.


Flurry of Blows - ever since offhand nerf (1.5) offhand rating is nothing to show off. The flurry of blows has very low proc rate and even lower duration. In other words: if this baby procs off in pvp encounter you can call yourself lucky. More so, in order to make this feat viable, you have to max out FoB because even with  3/5 in doesn't even stack up to Deft blades"

Flesh rot and Lotus weapon - the hallmarks of Lotus assassins are now this bloated, costly feats that in given pvp scenario might add no more than damage than a white hit. Before 1.6 those feats were "tier openers" which means feating them in was mandatory in order to progress further down the lotus tree. Also in 1.5 assassins fights were longer in general and thus those feats had more time to add some damage.

In 1.6 rot and weapon lost both of their functions: those are neither mandatory not helpful in short, dynamic pvp encounters.

Dark weapon and dread weapon  - same thing as above applies to dark and dread except the fact that those were never mandatory for assassins.

Matter of fact Lotus and Dread weapons are even worst than their lower tier counterparts simply because those need quite an offhand rating to proc. So since assassins main source of offhand - Flurry of Blows - blows, consider those "no-no" feats.

- damage is spread over time (no use in fast fights)

Crippling weakness and Corrupted poison - both of those feats are mandatory for unlocking high end feats - Curse of Lotus and Vampiric nature. If you do not plan to unlock those end tier CC then not  a single point should be applied. Not only 1/5 adds such a mediocre gains like 5% more snare power, but you have to keep in mind that both crippling and corrupted effects will be consumed by any miasma applied. For example: if you went GC + Soul Strike then your upgraded snare effect would last on your target for about....oh, 1-2 seconds?
Unholy strength - This feat used to be popular back when it awarded...10% damage boost to SS. When it got nerfed to 5% it was never popular again, even when SS was assassins main source of DPS. Needless to say, in 1.6 reality where SS is sub par to GC/SDS + miasmas this 5% boost is even less desirable, especially for 5/5 investment.


Poisoned Blades - ah the Poisoned Blades, the most stupidly underpowered feat for the gimpiest combo ever: lethargy. This debuff gives 20% fizzle chance which means that your target has a chance to fail on his casting. The problem is that in order to apply this effect you have to land lethargy combo which does stupidly low amount of damage. Furthermore: assassins already have amazing tool for dealing with casters: GC + Lotus Dart. Not only this will apply 100% fizzle (aka silence), but also will damage and buff your target (wrack).
The tooltip says that this feat increases area of effect. Since lethargy's effect is considered a cone, Poisoned blades most likely only widenes the cone horizontally, but not vertically.

If this feat was upgrading our reach (vertical upgrade to cone effect) and lethargy was fixed (meaning: it would do something as opposed to "jack shit") it would be a great tool to catching up with runners and keeping your distance while low on health. Lets just hope that lethargy will get some sort of revamp in expansion. Who knows? *cough*.