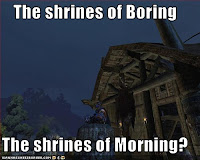 After couple of days of Shrines of Bori(ng) I can honestly say that it is a failure. I like the tokens system that came with 1.7 and I think it has been well implemented with quest system for minigames. Nuff said.
But the Shrines reward you for NOT doing pvp.
Here is how stuff goes down:
Get a group that will farm the mats well, about 6 does this fast enough.
Grab resources, one shrine, chain-sacrafice and get 6 tokes, 1200 xp, 6000 renown. Sweet.
What you don't want to do is to get sucked into somekind of pvp encounters. Bori is not impressed with pvp! That is right: the freaking god of war rewards the humble ones that do not spill innocent blood.
Allow me to elaborate: pvp slows your gathering, god forbid if you die and drop precious resources.
If you are attacked "guerilla style" by 2-3 guys then just get togehter, track them down with ranger and kill off. But what if you face equal or bigger group? Damn, guess you will have to bring more people. That means: less tokes, less xp.
The conclusion is: not doing pvp is an ideal scenario where you can farm tokes at optimal rate. FUN? That's Bori for ya!
This creates all sort of funky scenarios where Fury PvPers are transfering to Hyrkania(RP-PVE)so they can farm in peace. Either that or you have to log on in the morning, when gamers with jobs (TM) are at work.
You can check out offical feedback thread that is like 26 pages of complains.
The question is: did FC pushed this content too soon or what? On Aquiliona (RP-PVP) the Bori is being constantly impressed by 2-3 guilds that have naped each other and farm in peace (so do I for I am in one of these guilds). Not in that alliance? Guess you are screwed out of PVP T2.
Fury, on another side, is one massive battle ground where people gain 1 token per several hours. Feeling like droping 500 HOURS into getting 1 pvp ring? I don't think that is going to fly in my world.
I don't think that Bori will stay this way because it is unplayable right now. Can't wait how Game Director will handle this one because simply saying "some people like it" won't cut it.
.
Posted by Slith at 12:02 PM

these are my toughts after 2 hours of playing it today

I'm sorry that we pushed FC to release PVP Content before the expansión. Now it seems Morrison's revenge, ugly pvp t2 gear, crap content, and they are focused in the expansion... which can take two years to be half completed ;), just can't imagine how they can release all these pve content that comes with the beta :O,

I really hope that FC released Bori in such a bad state, only to see what players do out of it to change it later and that this is also the reason for the huge amount of Token you need for PvP T2 (so that you dont farm everypart, before FC can adjust the System).

Well, I also hope that FC will change the look from nearly evry PvP T2 armor. They are just plain ugly.