Dagger and a bowl of rice: Khitai report ep. 5 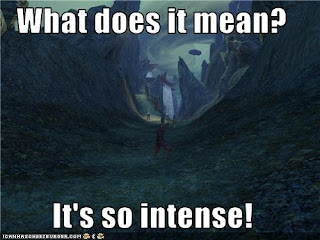 I have been preparing a post on how Kara Korum is Latin for bull shit. Seriously, you can't take a step without aggroing a spider or other member of araneae order (you google that shit). Compared to Grasslands Kara Korum is rocky hell in which you just die over and over. However this weekend I have decided to give Kara Korum another shot and to my surprise it has been the most pleasurable experience I have had so far in the expansion if not in the whole Age of Conan.
First and foremost the crater in Kara Korum and the story around it has set my imagination and interest a blaze. I am 100% sure that I will dwell in Kara Korum until I have checked every nook and cranny in that place and learned of it's secret. Seriously, I am willing, once rank 4 with Last Legion, to betray them (even thou I REALLY like that faction) just to explore Scarlet Circle's involvement with the crater.
I have also been pleasantly surprised with Brittle Blade's quests. Grasslands and Chosain gave me the impression that Brittle is this cheesy gathering of cutthroats. In Grasslands you take orders from fat assassin and Chosain officer is this insecure weakling. Lucky in Kara Korum you will have a chance to look at Brittle's dark side related to the worship of Goddess of death (from whom we will all take our final communion I have been told..). The cult of death behind assassination business has been briefly mentioned by fat assassin in Grasslands and I have truly missed that aspect of this faction. I won't spoil anything, but I am rank 3 with them now and it only gets better.
I still have to unlock Priests of Yun in Kara Korum, but I am fully expecting their quests to be pure gold.
So far only the Chosain has been disappointing for me since it gives very similar game play experience as Grasslands and there is not enough emphasis on the conflict: it should  have been ever present in that zone (that is how I have imagined it anyway when I have first read about Chosain) and it turned out to be small skirmish that players ride through and hoping not to get knocked off the mount by some mob.

Priests of Yun quests are pure awesomeness first time around.