Refuge of the Apostate review 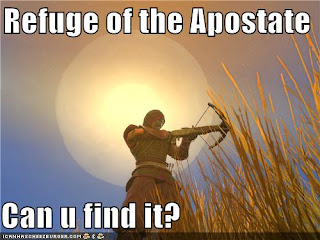 This is part review part bug report for the new Refuge of the Apostate solo instance. There will be SPOILERS so be advised (not to QQ about it). This is written from Assassin's perspective. I would consider my character as advanced in AA's (all the silver perks that I am using are maxed out, all the passive damage upgrades for combos are maxed out, and couple of others) with solo Brittle Blade set and pair of epic daggers.First of all this instance gives hard mode tokens. This will unlock solo pve progression for a lot a people that cannot or do not want to run hard mode instances. At current pace it will take AGES to get even 1 item, but nevertheless the option for that is there.

The quests are a little cheesy for my taste. Pretty much I have no idea what the hell is going on. The story is "there is this guy and he does some stuff like rise golems so...go keal him for teh lootz". Khitai expansion brought great writing (especially in Kara Korum) and what is being served with this instance is just sub-par. What are they digging for? Whats with the golems? There are some JIAN SHI there? Why? Why is that HOX boss raising undead? Wait, this is catacombs or mine and uh, library at the same time? What is this place? And when you have finally found "the notes about the source of power" you just give them to NPC. There is no reveal or epilogue. I guess that part about Sa-kota (is that her name?) and the illusionist trapping her in nightmare is pretty good, but CLEARLY not enough. And where are the cut scenes you have been bragging about FC? Dreamworld engine was supposed to give you new tools and I see old stuff. OLD! There is nothing in this instance that we haven't already seen in Slaughterhouse.


Suggestions: work on lore and the story. You have to "bronze" up the instance, give it soul. Throw in some dialogue between NPCs, perhaps cut scene, some quest CHAIN for non-faction NPC? And that quest about "ring collector" *face palm* who wrote that? You have whole HYBORIA at your disposal and THAT is the best you can come up with? Go get the guy/gal who wrote quests text for Khitai and let him do his thing. This feels like a place holder story written by the code-writing guy. Don't you dare cutting corners on story! 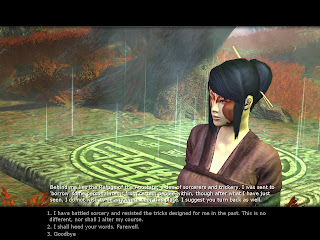 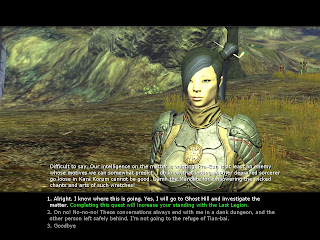 Very diverse. I think it is pretty much strongest part of new instance. It is done right from the start to finish. Parts of this dungeon remind me of other games (and that GOOD) so the mine area feels a little like very beginning of good ol' Dead mines from World of Warcraft, then there are catacombs which remind me of Thief games, later on the stage area is back to old school Tomb Rider mechanics or DDO. The dream zone? Pretty much what we have seen in Max Payne 1. Great stuff. But wait, why are Scarlet Circle mages digging in the mines? This is a work for a peasants and not the very elite of Khitai!

Overall its very solid, yet too small instance. It FEELS much smaller than Slaughterhouse Cellar (by far the largest instance so far). 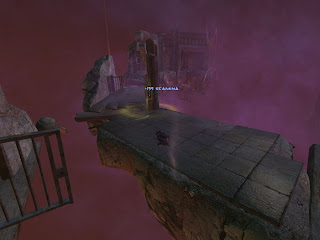 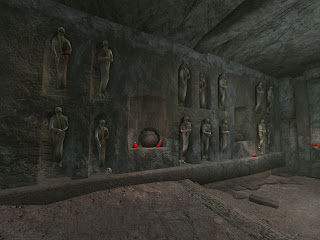 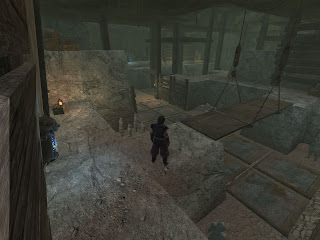 Suggestions: I would add some neutral NPC for the digging. The different areas of the instance are not tied with each other by story. It feels too much like you are in the mines and BAM, library! Why would there be library under ghost hill? You tell me. Either stick to one visual THEME or explain via the design why the visuals are changing and in the end there is library even thou you started in the mines :X

There are about 4 kind of mobs in the instance. Casters, golems, some undead and even fewer Jian Shi. It is OK, but WAAAY too easy. You see there is but one type of mob that will always stay deadly for the players regardless of their gear and AAs - archers. I can PLOW through all the villa content (sometimes I do so for Beguiler Blood), but if I go to Slaughter house (which has archers) I have to watch my pulls because archers will eat my HP very fast.

Suggestions: add archers mobs to slow the progression down and enforce more careful pulls/stealth. Add more trash mobs. It feels like there is not enough fighting.


Bugs: - golems have no attack sound

- mobs lose aggro if you run away far enough. It is too easy to sprint to the first boss, kill few adds    (because majority of mobs lost aggro) and kill boss, repeat for main boss.

First of all: the entrance. Please either change where the entrance is located OR give some hint in the quest text about the entrance. I have spent 1 hour looking for it and I had to resort to asking on TL forums. Frustrating as HELL. Second thing is getting to the ghost hill. On my way there I have pulled probably every single arachnoid and canine  in the bloody Hyboria. So you have to either fight through BILLIONS of mobs OR pull them all and die near the respad OR pull them out and bug them out on the rocks. Just remove couple of the mobs near the respawn pad so its easier to shake off aggro :X

Now the stage area with the puzzle. It was fun doing it the first time, BUT what the hell? It is same puzzle every time? Are you serious? After beating it for the first time there is ZERO challenge in that content.

And what's with those thingies breathing fire and ice? It slows you down, but you will still beat the clock :P And the fire damage is mediocre at best - why even bother avoiding it?

- remove few spiders and hyenas near the spawn pad

- make the puzzle different every time

- make the fire and ice traps deal MASSIVE damage and MAJOR slow debuff. It should be the part of the skill to avoid them. Traps should be DEADLY.

- add extra chest that can only be looted when a person runs through traps flawlessly. If you are too slow the exit will close down. There should be an extra reward for people performing very well

- add extra challenge to the puzzle area. Knock back traps?

- use emotes for the puzzle area. Emotes are big part of Khitai content so why not use them here too?

- some times the traps (those with sticks) will be active but there will be no visual representation of it.

- you can re-enter the instance and finish it as many times you want until you have returned the quest. No cooldown on the instance (perhaps its just for TL?)

The first boss looks like a Hox (because of the armor). Not really in line with the undead theme. The fight is ridiculously easy. Its about tank & spawn. And who the hell is Corpse Walker? Give the poor lass some persona! Add her to the story. 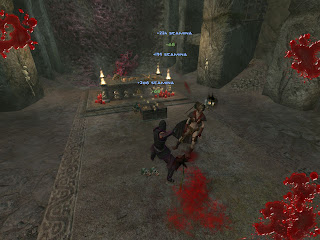 The main boss is pretty great as character and fighting him is interesting -  no questions asked here.Well done!

There is a great NEED for the third boss as a rare spawn. The villa in the commons district has those. Those bosses will spawn only from time to time and can drop rare root (like kittens!). This would make runs more interesting.


Some suggestions for the rare boss:

1. Some super golem (perhaps a general?)

- rework the first boss. Too easy. His garments are not fitting his role. Give him some PERSONA!

- add rare spawn boss to the mix to keep players interested. Give him some special loot.

- give the main boss a fatality that he can use on our character (that dream fatality he does with skeleton hand is rad! more like that!)


Bug: You can fatality the first boss

Ah the loot... It will be the main reason for people to keep coming back. I cannot emphasise enough how important it is for you do have it done the right way (TM). Yes, the hard mode tokens are great, but it should be possible to eventually get enough of tokens to buy some epic gear (assumed you have grinded your moas and gold too :X). Even simple ring like death's ward will cost you 490 moas/98 hardmode/25g 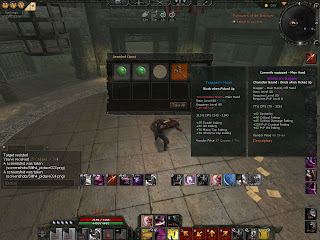 Lets assume that each run gives you 1,3 hard mode tokens (because you will get 2 from time to time):

It will then take about 75 days and 75 runs. This is insanity! You might as well NOT give us those tokens.

Want some epic armor? 196 tokens! I will show us some mercy and not do the math of that price.

I am reasonable and I am willing to put in some effort to get the most shiny things, but lets keep things in perspective. I am sure that you don't want to over-reward the players, but so far you have grossly UNDER REWARDED the player base and this is why you basically had to rework faction progression system, give us more moas for KK and Paikang and reduce lvl1 and lvl2 blue's moa prices. Do not make the same mistake twice. Get the rewards RIGHT the first time and in six months from now.


My idea is: 2 hard mode tokens for run, a chance for extra 1 (3 total) and if the rare boss spawns it has also a chance of dropping extra 1. So if you get super lucky you might get 4 tokens and if not then you will have to "work" about +30 days and +30 runs for 1 basic epic item. Even most picky players will have at least 6 items from 6 factions on their wish list and 1 item will take about 30 or 60 days to obtain. Even if you up' the hard mode tokens count you WILL keep the MOST HARDCORE busy for over a year...on

Give us some carrot!


On the other hand I like the high chance of bag drops from mobs. They always might be holding something extra.

- add a low low chance of epic drop from one of the bosses (is it already in?) 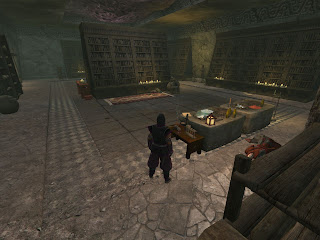 Before I round up this post here is a quick vid of Fass of Exalted speed running the instance. A lot of spoilers and a proof that it is way too easy right now.

But you're saying it's too easy, but will it be too easy for a fresh 80 without aa's as well?

I hope they make it hard, and I don't mind them making it too hard for fresh 80's, but still, they probably (as usual) want to make it something for everybody instead of pleasing the hardcore bunch, meaning it will be too easy for the elders.

Thanks. I hear ye! Even did a segment on this very issue in assassins hideout podcast 24, check it