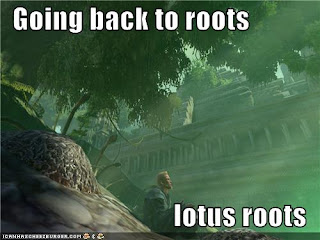 Recently I have been extremely frustrated with my Assassin experience in Age of Conan. In solo pve I have maxed out all factions (well I still need 300k for Hyrkanians, but I could use veteran tokens to max out). No zone is offering any challenge whatsoever: avatar and DWW + Gravy to overcome all!

Same thing is happening in pvp: I am getting kills, but then again I am dieing to ridiculous stuff like pvp lvl 1 ranger CCing my ass back to oblivion. That and the problem that every single assassin feeds off same stuff: some variation of hybrid build with avatar, DWW, FTD and Explosion. I have to agree to the bad rap assassins are getting: it IS all about avatar-->FTD-->Snap kick-->Explo-->DWW. This combination just works, so I don't blame anyone for using it. If anything you SHOULD specc in  the "best specc" and hybrid is indeed a VERY POWERFUL combination: all the best toys with only downside being lack of anti cc.

I have decided to go back to my 1.4/1.5 roots by speccing in Lotus/General and stick with it (at least before I will go completely mad). I am still putting 5/5 into Corrupted Blades feat from corruption trees. I don't think speccing 56/5/18 really counts as being hybrid and massive passive damage from CB is too good to pass up..

So why speccing this "inferior" combination? I need something different - badly. I am willing to put up with a lot just to have an opportunity to "mix it up" with a class I have been playing non stop since may 2008.


My lotus philosophy
I am not ready to "show and tell" my build yet because the last 10 point are so hard to distribute. I just LOVE this feeling of creative anxiety when you are "dead locked" deciding your build. Lets be honest: there is not much to decide about hybrid ;p I have, however, found a major flaw in my previous tests which made me shy away from lotus. Shards management. Having access to Necrotic and Crystallized hybrid build almost makes you forget about shards because you can get them back easily and often. Lotus/General specc has to rely on Crystallized Lotus which gives back 3 shards. That's just not enough and I have found myself either not using grave blossom at all (huge lose in DPS) or skipping Lotus Overdose (exactly as bad). The solution seems to be using castration perk. I know that its a bad upgrade to a horrible combo, but capturing that 2 shards is live saving. I will miss my beloved choking powder, BUT if anything having choking powder instead of castration is making shard management for lotus assassin that much worse (or you won't be using CP at all with is also bad). Another rule to follow is anti cc: I am getting every single one. I have decided to magnify lotus strong points (anti cc and anti magic) instead of trying to plug the holes in the build (lack of healing and armor).

It almost feels like playing different class. You cannot go with guns blazing and plow trough legions of mobs (yes, that is what hybrid DOES). The problem lies in NOT having the healing factor - the dps is till quite amazing. So it does down to not being able to out last the mobs (avatar makes it possible) because you will never ever out DPS Khitaian mobs. Out DPS mobs? Yeah, Khitai mobs have both constitution and dps of a freaking demon. Hell, some of them ARE demons. While 1v1 or 2v1 with mobs is manageable (for hybrid: laughable) 3v1 is hard as nails and 4v1 is a death wish. If you want to test how good is your lotus build (and lets face it gear and AAs) go to Paikang and try fighting:


The ultimate test for any assassin build (and assassination capabilities in general) is taking down Dark Legion's general - solo. I haven't attempted this as Lotus yet, but its hard even for hybrid.


To sum it up: lacking the healing factor makes you focus more on pulling and being a lot less reckless.

Very mixed feelings. There have been times where I was like "shiiiiiiiiiiiit if I was hybrid specced I would melt that guy's face off" but also times where I have broken every single CC from barbarian and killed him off easily ("CC denied, bitch!"). Getting kills Lotus specc makes me smile, especially when people are very surprised with you breaking their ccs. I have even got a whisper from a conq that tried to KB me sever times to no use: "Why aren't you KBed? You don't have that burning thingy going" (burning thingy must be avatar ;p). I guess excellent balance usage is pretty rare nowadays.

I have also enjoyed sneaking up on TOS with 3 other people and slaughtering him while having Lotus Overdose and Excellent Balance going. There was nothing they could have really done to stop me.

Curse of the lotus (or lotus bomb) is also delicious to use, especially since AOE ccs are not very common.

There are downsides, of course. It is hard to chase down people (even with maxed out nibble which gives +5% speed bonus) and my accelerated/FTDs are sorely missed. Also soldiers are a lot harder to deal with now: no more GC/Avatar/DWW/Grave Blossom "Bam Bam, thank you Ma'm". This is especially evident with Conquerors which are, historically, bane of Lotus Assassins (ever since 1.4).

I think that over all Hybrid is favored with it comes to rough killing (mainly because dreadful, skipped DWW)

but then again Lotus can get those kills that hybrid could not (because hybrid assassin would be cced back to stone age while his pray would get away).

The very first games I was extremely clumsy with my anti cc arsenal. Being hybrid for so long I was using the time I was CCed to sip my coffee. Now I am like "oh shit! I gotta use my anti cc!". Lucky after couple of games I am back into anticipating CC and using anti cc the very second you get stuned/feared/snared/rooted etc. You really have to put your mind into it, otherwise you are not taking the advantage of anti cc and it just might be the only one you have got.

Is it for everyone?

Hell NO! And I must state that its not matter of skill, but sheer stats. Lotus requires gear and AA. While Hybrid might still perform well while under geared it is where Lotus fails miserably. I am even taking advantage of my costly Lotus pets (check them here) to overcome some of this build's shortcomings (and to further it's breathtaking damage).


I will update my findings as get more experienced with post 1.6 Lotus.


And before I end this post here is a little bit of lore I have "written" for my character:

"Bewildered by the corruption slowly taking over his mind he traveled far to the east. There, deep in the Paikang jungle, he has found the temple of Yun who's priest cultivated lotus for generations.

Slith sat under a blossom with his eyes open and dilated with the fumes of the yellow lotus, far-staring, as if fixed on gulfs and nighted abysses beyond human ken. In this unearthly garden of Yun he was contemplating the errors of his ways. There, in his dream-haunted slumber, he has reached the taint that has been sending chills down his very soul. As he was descending into the black abyss he has heard  a a single word being spoken, in a rich vibrant tone that was like the golden chimes that ring in the jungle-lost temples of Khitai. It was an unknown tongue, forgotten before the kingdoms of man arose, but he knew that it meant, “Come!”

He turned quickly away and saw great black blossoms nodding at him. One of
these had touched him. They seemed to beckon him, to arch their pliant stems toward him. His is eyes cleared instantly and became cold and cruel as a vulture's. He got up and offered this gratitude to the blossoms which rustled, though no wind blew". 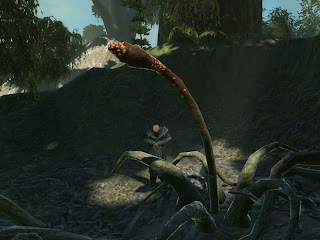 This short text is really made up from several Conan stories by REH (with very little of my own invention). Can YOU name the stories which I have used?
Posted by Slith at 6:13 AM

I played like a noob half a year, then I started playing lotus(up to both ends; LO-CotL/hybrid without gen). I wasnt effective much but I had some style, watcing dots from a distance were satisfiying ^^. Then changed to Avatar build, never knew DWW+GB was this great, heck I played only with GB most, using them(+LO) cautiously/rarely for the shards. Though after one year playing assassin, Avatar build felt so great. Not afraid of anything. Jumping in-out, dying many but killing more. Then I got back to a pro-LO build(41-32-6/immunity build), Using it was no different then Avatar but I missed health tap and LO's scale adjustment effect is just not enough. I had to be sure of it takes effect after clicking and wating couple of precious seconds. Though attacking a barb and watching he's spending his stuns and KBs were the most fun of this build. I'm still with this build but I took a break from the game. DA2 is more addictive than conan these days for me :P