Let THEM make rimes for the vultures 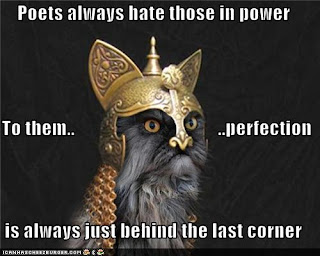 Today after re-reading "Phoenix on the sword" story I have noticed how similar it is to what has happened to the Age of Conan development. I know that the similarities are not STRIKING, but give it a shot.


"When I overthrew Numedides, then I was the Liberator--now they spit
at my shadow. They have put a statue of that swine in the temple of
Mitra, and people go and wail before it, hailing it as the holy effigy
of a saintly monarch who was done to death by a red-handed barbarian.
When I led her armies to victory as a mercenary, Aquilonia overlooked
the fact that I was a foreigner, but now she can not forgive me.

"Now in Mitra's temple there come to burn incense to Numedides'
memory, men whom his hangmen maimed and blinded, men whose sons died
in his dungeons, whose wives and daughters were dragged into his
seraglio. The fickle fools!"

"Rinaldo is largely responsible," answered Prospero, drawing up his
sword belt another notch. "He sings songs that make men mad. Hang him
in his jester's garb to the highest tower in the city. Let him make
rimes for the vultures."

This reminds me how  Age of Conan Producer and Game Director Gaute Godager has resigned from Funcom and Funcom announced that Craig Morrison has been appointed as the new Producer and Game Director. I remember how people were making ALMOST death threats to Mr. Godager back in the 1.0 vanilla AOC because of many maaaaaaaaaaaaany issues with the game (mostly client related). Back then Sil was hailed as "savior of Anarchy Online" and "a man with vision about pvp".


Rinaldo has no personal ambition. He sees in Conan a red-handed, rough-footed
barbarian who came out of the north to plunder a civilized land. He
idealizes the king whom Conan killed to get the crown, remembering
only that he occasionally patronized the arts, and forgetting the
evils of his reign, and he is making the people forget. Already they
openly sing The Lament for the King in which Rinaldo lauds the
sainted villain and denounces Conan as 'that black-hearted savage from
the abyss.' Conan laughs, but the people snarl."

This is exactly the case with Gaute Godager and some players. True, previous Game Director had some pretty amazing ideas about pvp (kingship and powerpoints), but then again he could not release a game with stable client which have lead to the disaster later on. That man is also responsible for no end-game pvp, let alone he green-lighted the game to go live without any in game support for pvp like lvls or gear. All of sudden all that is forgotten because "he had some pretty good ideas for pvp". Yep, in fact he had a lot of ideas, but the execution of was sorely lacking

Who is Rinaldo? Well those are players who idolize the old Game Director. There are quitea few of them. If anything Morrison has lifted Age of Conan from the brink of destruction but now he is being portrayed as a man who butchered pvp when in fact he pretty much established pvp in this game. Before he took over there was none of it (except for random Kheshatta ganking and pointless minis with crappy interface)


"In the old free days all I wanted was a sharp sword and a straight path to my enemies. Now no paths are
straight and my sword is useless".

It very much seems like when Morrison took over the game was in such a shitty state that the "patch" was indeed straight. Basically everything needed a fix.Now when the game is quite stable and improved it is much harder to add value to that AND please majority of the playerbase. Whatever the decision will be it is always criticized on the forums. True, Bori was a huge mistake (or a fuck up if you will), but before all that went  down I was pretty satisfied with aoc's pvp. All I care about is M.E. (my enjoyment).

This is in no way, shape or form a written defence of Morrison (seems like he can defend himself on the forums pretty good), but a kind reminder (or a reality check) to all those Rinaldos out there: remember who had the crown before Morrison and in what state Age of Conan was in before he stepped down.

Mr. Morrison established pvp in this game? Don't make me remove my bookmark..

Pvp was all over back in the days when Godager was head chief. Basicly because there were players enough. Godager made merges, I'm not sure about this as a fact, but I don't think Morrison has. So Godager took action when it was needed. People want people to play with, that's the first prio in an mmo.
Godager 1 - Morrison 0

The only pvp related things Mr. Morrison has done is to add Bori, and as you self write, Bori was a huge fuck up. So what do you mean by writing that Craig established pvp in this game when it's an indisputable fact that pvpers have fled this game after Morrison entered the stage.
Godager 2 - Morrison 0

It was missing endgame pvp? That's sieges. Sure, they have crashed a lot on Fury, but it seems like they pretty much work on other servers. Sieges were Godagers work, Bori was Morrisons.
Godager 3 - Morrison 0

Morrison added 1 minigame after a year on the job, after the majority had left making it very hard to play this minigame unless at prime time on any server. So I'm not adding a point to Morrison there, tops a ,5.

Cool but Slith, we want an article from the new Blood & Glory server!

They were needed because of Godager.

2. Godager made the Notoriety System. Good job there. Yeah I am being sarcastic.

3. Fightclubbing farming was made possible thanks to Godager. It was Morrison who reduced xp for each kill.

4. Morrison changed how the minis work (adding xp rewards, before those were horrible for xp) and token system which further drives away fight clubbing.

No it looks like I am defending Morrison - he is by no means perfect GD, but lets not idolize the last guy - how couldn't even get the game client right.

But Godager made more than 1 million players buy this game. The majority of these left because of the game being pushed online too fast, true enough, but I dont think we can blame Godager for that decission. Blame the guys with the money.

How many has Morrison made buy it?

2. The Notoriety system should have been in from launch. Loads of players left because of getting wtfpwnd.

3. So you're saying that Morrison is better? People has been using every single system available in Khitai as well to get fast progress. Take instance exploits, the forrest thingy, the nuke the first boss for renown over and over again without getting lockout thingy. At least Godager backrolled the worst of the naked pvpers, what have Morrison done with the ones using the system in other ways? Nothing.

4. You saying the game client is fixed now? Get real. There's tons of errors.

Godager gave us more than a million players, we were probably at least half a million left in sept 2008, how many is it left now and how many has Morrison brought?

1. It was the sexyest man alive who made 1mil people buy aoc: Erling Ellingsen. He has hyped aoc so much that it has lets its own orbit and became a planet in a solar system (planet Conanus)

3. It was Morrison who has rolled exploiters
http://forums-eu.ageofconan.com/showthread.php?t=100210

There were also reports of GM banning people when caught abusing instances.


4. If Godager was such a golden boy why did he step down? Current client might not be best shit out there, but at very least it doesn't crash on people randomly.


I am not saying Morrison is better, what I AM SAYING is that Godager was NOT better than Morrison. Big difference there :)

People are trying to create this myth of Godager when in fact he had 1 mil subs leaked trough his fingers. Morrison has ZERO budget on adverts whole Godager had arguably BEST hype machine money could buy in the last couple of years of mmo history.