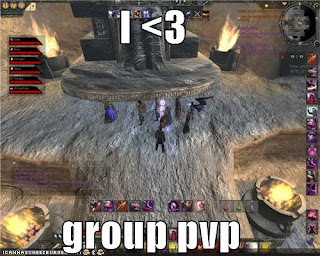 First let's clear some things up. I am playing almost exclusively minigames, dedicating about 80% of my play time to group pvp with 20% of solo pve. I did my 1-3 pvp lvl in solo minigames (waaaay waaay back in 2008) and then half-killed myself reaching pvp lvl4 through solo world pvp in Kheshatta. This was neither fast nor fun. The very idea of going from 4 to 5 (at that time it was quite a feat) solo was giving me the chills. I have been in 3 quite big guilds (Sanguis, SCUM and now Exalted), but when I was logging at prime time large majority of guild was raiding so guild premades were out of the question. At that point  I was thinking about switching to PVE (dumb idea, I know ;p) because people were having so much fun doing that kind of content. But what makes it fun? It can't be gear alone, nor a challenge of beating some raid boss that has been beaten dozens of time. It was the social aspect of PVE: people knew each other and were getting groups together, chatting along on vent/group chat. I have decided to apply same principle to the PVP: whenever I have seen someone performing good in pvp I was adding them to my friends list and then offering honest acknowledgement of their pvp skills and later on - inviting to my pvp group. Amazingly fast I have met a lot of people, and by playing together with them regulary I have made new friends outside the guild (touching, I know). Pretty soon my pvping was very much centered around the social aspect of grouping: we were getting on vent and talking between and during the matches. My pvp experience also improved: I have been grouping with people that "know" their stuff when it comes to group pvp and having vent to communicate only enhanced this further. Sure, there have been times when we were facing some noobie group that we slaughtered in pretty nasty manner. That wasn't fun for us nor them. But when we were facing other premade, especially made from single guild, it was the most fun and challenge I have ever had in any game, let alone Age of Conan. We were winning together and of course - losing together.

Pretty soon I knew enough people to always have someone to share the experience with in pvp. Don't get me wrong: I am not talking about hand-picked group consisting of specific mix of classes and pvp levels. It was invite on demand or "Whisper me for minigame invite". To this day I have this as my guild log on message.

I have been enjoying both 6-man "OP-wagon" as much as just getting another person for 2 man group. It was about playing with people that you have something in common with: fondness for pvp and Age of Conan.

Enter 2.1 and Funcom decides to remove GROUPS FROM GROUP PVP (sorry for caps, I had to be clear on that). Since I got burned many times by commenting on FC's content that I haven't tested thoroughly (example: Bori) I have decided to keep my mouth shut and see what happens. Well, after reaching 2000 kills in 2.1 I can say this: Funcom is again butchering pvp. I find myself logging on and then joining minigames with random people with random outcomes. If I win: yey, guess I get a token. If I lose: I guess I will sign another one. Before 2.1 every victory was cherished and celebrated amongst us and a defeat was analyzed and discussed.

2.1 was designed to: make pvp more accessible for other players (that were getting butchered by premades), and to spread the classes evenly amongst the groups (healers for everyone). Was it worth to trade off social aspect of pvp for it? I don't think it would have been  worth it even if those changes were working and  they are totally NOT. The game spreads the classes in more weird ways: if there are more than 2 classes of rogues one side will get 2 rangers and other 2 barbs, or 2 barbs and 2 sins. People with low level pvp gear are still getting slaughtered (especially by Bori farmers) and the healers are no were to be seen.

Furthermore the new SAG minigame would be amazing for guild vs guild premade, but it fails when 12 random players face other 12 random players. Most of your team mates will be either running around like a headless chickens without a clue what to do, OR hunting for totems and spreading the fire debuff. A lot of games "end" at the first couple of minutes when one team gains 200 point advantage and holds the center. Without strong leadership and communication re-taking their fortified position is mission: futile suicide over and over again for 30 minutes.

So current state of Age of  Conan group pvp reminds my of my Quake 2 days back in 1999. Back then broad band connection to the Internet was not very common so I have been playing a lot of "multiplayer" with bots. Those were quite annoying as their AI was leaving much to be desired. More than 10 years later I am paying to play a game that very much feels like that 1999 quake2 "multiplayer": with random, dead silent people in minis I might as well be playing with bots.

I am not even going to discuss how this affects guilds.

How could anyone that deems themselves "professional game developer" could think that removing grouping  option from MMO was not only "good idea", but would also fix anything.

Could you imagine what would happen if grouping was removed from PVE? Disaster. Why did  anyone would think it would be different for PVP?
Oh and I hope no PVEr takes offence after reading this: truth be told I envy you guys because you can still form groups...for now.
Posted by Slith at 1:12 PM

Some good valid points. I have just returned to AoC and I remember the days when premade destroyed every mini.

I cant see why Funcom add many more game modes to pvp. Premade against premade, free for all and more.

Have you posted this in official forums or in forums Funcom actually read?

I keep this kind of stuff for blog only.

I happen to *know* that it reaches FC anyway ;p

I'm asking me anyway, why Funcom has removed the premade option and not just included a pug only options.

I hope that Funcom does the next step and includes premade minis again. Till now they preferd to do an half assed way, only doing half the work and ignoring the other half.

We should also add the new feature of "group balance" which is not working properly at all.
It's quite common to enter a minigame and find yourself in a full melee group without traces of an healers against a full ranged group made up of 2 ranger 1 demo one necro 1 tos and 1 guardian.

And yes, try to do something against this group :P result is a slaughter!!