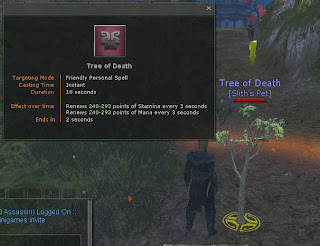 During your questing with Brittle Blade you will come across the dreaded tree of death. I won't spoil what exactly the tree of death IS, but I will hint that it plays major part in Brittle Blade's business. At rank 4 you will be allowed to acquire a pet that came from this legendary tree. While it might not have even small portion of the power that the tree of death has it still can be very useful.
The stats:
1. Upon summoning the pet grants you a buff that ticks 3 times for 240-293 stamina and mana.
2. the tree (which loooks like small tree) gives buff with stam/mana . You don't have to be near the tree nor any enemy must be present.
3. the tree gives aura (pretty large radius)  and any enemy within will lose some stam/mana (not much)
4. the pet is on 120s cool down
5. its pretty much weaker version of "second wind", more of "consume souls" from 1.5 era (consume all shards for stamina buff - I do miss that)
6. it gives that little bit of stamina when you need it
7. its an instant cast. It can be used while moving or while on mount.
8. It costs 800 MOAS and 30 gold
9. You need rank 4 with Brittle Blade in order to buy it. You don't have to stay friendly with this faction in order to keep using it.
I am using this pet quite often. The buff allows you to use Accelerated to full extent - the buff from the pet and stamina pot will feed you stamina to keep sprinting all the time the accelerated buff is active. Also this pet allows your to sprint away from any mobs that might be chasing you.
I have one great story regarding this pet. During my questing in Kara Korum I got jumped by very brave Barbarian who attacked me while I was fighting a mob. I have decided to drop accelerated and run away. He was almost catching up with me because I was staggered and could take full advantage of accelerated speed buff. Soon we were both out of stamina and the chase became a slow crawl. All of sudden I have dropped tree of death which gave me the precious stamina to get away and at the same time it drained the barbarian of whatever stamina he had left. Just for that I consider this pet a money well spent.
To sum it up: this pet is cheap substitute for second wind and a worthy replacement for consume souls from 1.5 era. Do get it.
Posted by Slith at 12:15 AM

When dog is going out of control, get the dog whistle app<