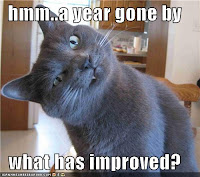 Last year (meaning 2009) I did a scolding review of Age of Conan development (well deserved I might add), but it seems like 2010 brought a lot to the table:

Crafting - crafting is still almost meaningless because of the reasons stated here. I can honestly say its by far the worst crafting I have ever seen in a mmo. Huge room for improvement. Like HUMONGOUS. I had to bump up the previous rating of epic fail to solid 3 because crafting has such a big impact on guild progression in renown levels and rankings. So if you have your bank stuffed with mats you can now pump out items for an hour or two to help the guild and be done with it until your bank refills. Clearly not enough, but still small step forward.
Rating: 3/10

Itemization - The expansion brought great sets for every class and those can be achieved by doing both solo and group pve. The sets are beautiful, with great stats and distinctive looks. I am taking 1 point away because there is no way for solo players to get hard mode tokens and this denies them access to weapons and accessories in expansion. Hell, I am taking away 2 points because it pisses me off so much. Overall big leap forward and superb job.
Rating: 8/10

PVP minigames - a lot of great changes. New minigame, random vs random, pvp xp for capturing flags and winning. Coward's shame is also upgraded and its working. I am enjoying this content very much and its well rounded up part of aoc. I am taking away 1 point for no premade vs premade option, 1 point for no way to deal with afkers (aka leechers) and 1 point for allowing flag carrier onto the spawn point where your opponents can recapture it forever. That's a bit rough, but since its such an excellent part of aoc, I expect nothing but the best from minis.
Rating: 7/10

PVP XP and progression- I am not going to talk about pvp xp from Bori because "epic fail" rating would have stayed. If you don't do Bori then the game still offers variety of pvp xp gain improvements. You can get pvp xp for minigame quests, by capturing flags, killing opponents, trading tokens for pvp xp and even buying tomes of carnage that give great boosts to pvp xp gained. Great job with the addition of minigame quests and tomes. The recent changes to minigame gear also made it within the reach of almost any pvper.
Rating: 10/10

Class balance - the game feels MORE balanced. As and assassin I obviously cannot be objective, but it seems like no class is topping the charts regardless of player's skill. FC did sin, guard and ranger revamps and more are coming.I am taking away 1 point for how Bori gear affects players performance (tip: WAAAAAY too much) and 2 points for damn combo skipping. Solid improvement, but still a lot to do.
Rating: 4/10

Open world PVP - We got Bori! Seems like FC must just drop the ball at some point in whole year. This is Bori in a nut shell, but your can easly find a lot of multipage threads on official forums. There are players with 200 kills and 100 deaths and pvp lvl 10 gear. Nuff said. I am bumping the rating up from "legendary fail" to "epic fail" because FC tried to make things better with pyre system (that's good, more like that please!) and the Game Director had the balls to, while staying within his professional boundaries and minding the company best interests, admit failure of Bori content. I can respect that.
Rating: 1/10 EPIC FAIL

Sieges - Still very unstable (aka they crash) and the performance is laggy at best. Furthermore some classes still dominate the sieges while others feel out of place for such a heavy duty action. This part of game needs a lot of work so I am giving it savage beating in rating.
Rating: 1/10 EPIC FAIL

Guild diplomacy tools - There are none. There is no support for guilds and server politics in AOC. Come on! Alliance system! Where is that?
Rating: 0/10 LEGENDARY FAIL

Guild city - I deem this the most improved part of Age of Conan in 2010. The guild renown, added buildings and NPC gave the cities new life.Furthermore FC rebalanced renown levels on RP related stuff so smaller RP guilds could have access to the RP stuff. I am taking 1 point away because cities in general (apart from some decoration and building placements) still look the same for every guild so: more guild cities customization and personalization please!
Rating: 9/10

RP support - FC added items, clothes, drinks, guild social events, tavern rooms for rent. Huge, huge improvements. The name infractions are dealt with and seems like RP community is finally noticed and acknowledged by FC. I am taking 1 point away because the promised "social tab" for displaying items for looks over items being worn for stats is still not there.
Rating: 9/10

80lvl content for non Raiders - The expansion brought tons and tons of stuff for solo and small group players. Great, long lasting content (even if a little grindy) with superb story line. I am taking away 1 point for MoA grind (its very hard at the beginning) and 1 point for Chosain province zone (it sticks out like a sore thumb, there is nothing unique about it). FC is already talking about new solo instances, but that's for 2011 review.
Rating: 8/10

Updates - This one is a hard call. On one hand FC did 2.1 patch in batches (Craig M. be praised!) and the expansion is good, but they did drop the ball on several exploit fixes (you need to act fast!). Some exploits like combo skipping still remain after 2 years.
Rating: 4/10

Client improvements - the game still crashes on zoning, minigames etc. C'mon, after 2 years this is unacceptable! And DX10 is still in beta.. I am giving it 3 just because they did fix the Grasslands problems in expansion, but that's being generous.
Rating: 3/10

I know that there is a lot more to review, but these are the parts of the game that matter to me. What do you think? Drop me a line in the comments and have a great new year!
Posted by Slith at 4:09 AM

"FC did sin, guard and ranger revamps and more are coming."

Guard revamp!? It's not a revamp but a lazy ass update, with a few slightly differences. 0/10 points EPIC FAIL.

Good summary of last year though :)