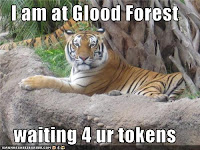 It's been a well established tradition at Funcom to NOT quick fix exploits that are game breaking.
Before I spill my guts over latest and loudest lets go over two other most spectacular exploits:
The purple rain - probably most known out of 3: the demons in Potain were dropping epic items like candy. People farmed the demons for days, stuffing several alts with nothing but epic items. The economy took a major shit and FC had removed the world epic drops from the game.
Fixing time: several days
Tarantia Commons Sisters - this is how people got swift horses for all of their mains and alts. You went to the bridge in Old Tarania and jumped down from the one pillar that is climbable. After you swam to the Commons you went to the beach were sisters were. Each mob had 5s respawn time and was dropping several eggs (each worth couple of silvers). That place gave EASLY 10g per hour (for melee classes, casters could pull of even more). To top it off low levels were jumping into water and after being invited to the group they were leeching MAD XP (avrg. 15 lvl per hour on pre 50 lvl and 3-4 lvl post lvl50). There is still quite a number of people with +1000g pices in their banks.
Fixing time: several WEEKS
and we are finally at today's item:
Gloom forest - you get a quest near the infamous gloom forest with a very low cool down. Basically you can get reward every 2 minutes or less. 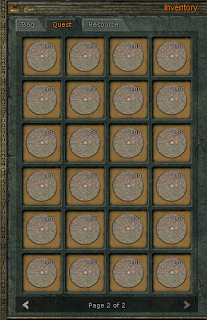 Allow me to elaborate: for doing one faction quest you might get ONE of those tokens as a reward. Some times a mob MIGHT drop ONE of those tokens. What you can see on the screen above are 100' stacks of tokens - on two pages. You take those to faction NPC and you can trade it for faction rep.
Right now farmers are RANK 4 (top rank) with several factions. Since FC won't patch the game it is almost guaranteed that some will MAX OUT on all factions. This is not some hidden exploit, its a wide spread, well known, THE way to make faction rep. People will LAUGH at you if you do faction quests.
Now you would wonder: how badly would UBER fast token farming would affect Rise of the GodSlayer?
People are already running around geared with faction stuff and their epic mount. Let me dumb this down a little more: people have DONE all the content, it is finished, beaten so to speak.
Today is may 24th, welcome to the RISE OF THE GODSLAYER.
What FC is doing about this?

Update Notes for Update 2.0.3
**These notes do not necessarily reflect the final version that will be deployed on Live**

GENERAL
* Several quests that did not previously have cooldowns will now have them.

This patch notes are from Test server. The fix for this abomination of an expansion is waiting idly on the test sever. Apparently people haven't farmed enough already.
And to top it off: it is not a KEY quest in game, its a shitty little quest from random NPC.
How about REMOVING the NPC Funcom? Just let people get few more tokens and fix it, kk?
After people have farmed all the rep in the world all they have to do is kill golem (open world boss that is player spawned and very easy to beat) several times and they can afford whatever gear the want. Just like that.
This got me thinking: how on earth would 1,5 years of expansion development could result in such a major screw up? Why wouldn't FC respond to the farming with a SWIFT and DECSISIVE action?
I cannot answer that without dropping at least couple of F-bombs, because I spent last week talking my friend into trying AOC again since FC is a different, more competent company now.

Please keep that in mind when thinking about buying Rise of the Godslayer and  the rest of you - have a nice evening at Gloom Forest,
nothing beats sunsets at Gloom Forest.

just to be on a safe side: I didn't do any farming and inventory shot is not mine.