Dagger and a bowl of rice: Khitai report ep.1 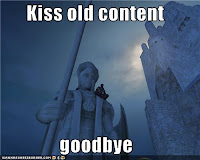 The expansion is here and I want to share the good word: FC did not disappoint (as it used to, like a lot, for a long time). Lots of ideas are going through my head because the very first feeling you get when you log in is the feeling of being overwhelmed, but in a good way (as opposed to being overwhelmed with bullshit in Bori).

But lets start from the beginning:


The gates are semi open

Again FC had a rough start. There have been some down times and threads going up to 150 pages filled with complains. I guess some things cannot be avoided and FC have really put in the time and effort to bring the servers back. There are some technical issues like zone crashes, lags, low FPS, but no worse than what patch 1.5. As I type this the servers are down for the update (you thought I would write anything if I could play now? Suckers!). Since the content seems to out-do what aoc have already been (at least in zone size, those things are HUGE) ROGS could might as well be its own game and that is why I am not holding FC accountable for the launch problems (and as influential blogger I could do just that). We will see how FC will address the rest of performance issues. 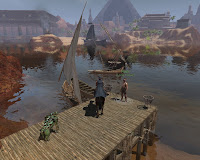 If you wish not to pay for the caravan to Khitai then you can accept the job of a guard. During your travel you can encounter one of 9 random ...um...encounters? Those are rather short, but very fun and they are adding sooo much flavor to the game. You see, Hyboria felt very very small because traveling from Aquilonia to Stygia took a mere second, when in fact it should have been a very dangerous journey. When going to Khitai you will see the deserts and the Vilayet sea  and that interruption will make you realise how far you are from homeland. I think that it is a superb idea and it adds immersion - something that aoc lacked greatly, especially in the begining. 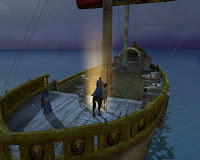 Layers
I have mentioned the feeling of being overwhelmed: it comes from the many layers that Khitai is made of. Virtually every of your action will contribute to some goal and will reward you in the end. I used to be my main woe with Age of Conan: once you hit lvl 80 all I could do is slooooooooooooowly grind pvp xp in minigames and if no minigames were up then I would do villas without any purpose.

Right now everything will reward you in some way. Lets say that Shadows of Jade gave you quest to deal with some Brittle Blade assassins. By killing the mobs and finishing the objective you will get:

FC did not mess around. The expansion is not all bloody (aoc is already just that), but it builds on the mature rating of this game.
In one quest Brtittle Blade assassin was insulting me and the quests text was done in such a way that I really took offence and felt like ripping his head off. He did not call me a clumsy oaf, but instead he vividly described how my character's mother mistaken the dog for her customer and how my faction elders- The Children of Yag-Kosha, are molesting new converts (!!!). Another example: one of the NPC mentioned how his mother smiled to him the night she was pulled apart by horses as punishment for the crime of adultery (according to Hyrkanian law). The limbless torso kept smiling in convulsions. What the hell? Now that's some dark shit.

I am, in fact, oversimplifying it, but once you play the ROGS you will see that its much grimmer than classic Age of Conan.

I am jotting notes as I progress in the new content so I hope to have some structure in these reports. Until now thats all because the servers are up and the Wolves of the Steppes need some killing.
Posted by Slith at 3:46 AM