Dagger and a bowl of rice: Khitai report ep.4 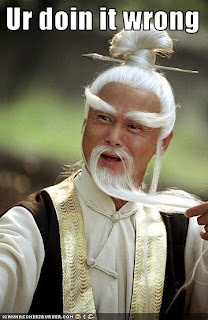 I think I have pushed myself too hard with the expansion content. Still I cannot afford even basic blue item (I am at 118 tokens and need 182 totally), but I have came to the conclusion: so what? I am no longer grinding Brittle Blade faction, but rather picking up random quests and enjoying the content as a whole. Yes, factions are important, but those are NOT the content itself. The content is story. Going though the quests I am reading every line of text and I am enjoying it. Back in the days of AOC I have been putting my headphones up, turning on some podcast and while listening to it I have been grinding the quests without much thought. I kinda regret that. My idea was getting to max lvl ASAP so I could start doing 80lvl pvp. With Khitai expansion that doesn't matter at all, there is no end to the content. I don't really need any faction items for PVP and I can do the quests fairly easly with the cultural set I am wearing. So apart from getting mastery points (which is something that happens on it's own, I have no control over it) I found myself just enjoying the locations and the quests and those are delicious. I have found a Hyrkanian girl turned into a Tiger, a guy who pretended to be scholar and tricked me into killing humanoids so he can devour the brains I have brought him before my very eyes, defended Pin-Pin against weaves of Wolves of the Steppes and escorted protitute to the Warlord's camp. While those might not be epic quests I haven't been bored by a single one so far.That is good enough. Over time I might just get the gear I want (altho prices are OFF THE HOOK), but it will happen as a result of my journey through Khitai and it is NOT the goal of itself for me.
I am almost done with all non-faction quests Grass Land and looking forward to exploring Chosain a little more. 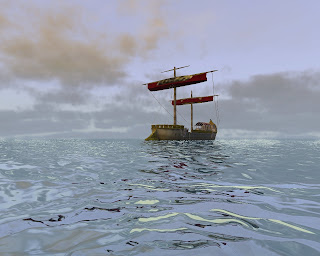 Apart from that I am trying to do every single random encounter on the journey to the Khitai. Those are simply jaw dropping. There are basically 3 types of encounter quests: island ones, boat/diving and desert. So far I have dived to explore sunken temple, fought the Kraken, stole the supplies from the pirates and cured the sick sailors with the herbs I found the the island. I my only wish is that FC allowed us to explore the locations a little more. There is nothing I would enjoy more than checking out every inch of some lonely island in the middle of nowhere.
So if you are still trying to MAX OUT on some faction my recommendation is: don't, take it easy, enjoy the story and reap the rewards...over time.
Posted by Slith at 3:54 AM

As an added bonus you can hope that FC will lower the prices on faction gear by the time you have enough tokens. Imagine the feeling of having spent a million hard grinded tokens for a pair of socks just to see people get it for half a million the week after :-)

havent seen those for a while now :P

Lol, im an usual reader,we are watching you!

Yep now you got that right, relax play for fun, don't let the grind consume you.

Who cares if some random kid has a tiger or a wolf and he is rank4. It's just a freaking game after all.