Dagger and a bowl of rice: Khitai report ep.2 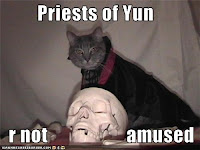 Factions, are they great addition to the AOC game play or is faction rep just boring, mindless grind...for itamz!

I am going to say it: I like factions. There, I have said it. Yes, there is an element of repetition in quests (which I don't mind), but you need a lot of rep for best stuff and FC cannot be expected to invent hundreds of faction quests and still keep them interesting. I rather re-do quality stuff than take on "kill 10 snakes" quests. The ROGS content is HARD and getting rank 4 with factions should also be HARD, especially when the gear is really worth it.

Let's go over what I do like about factions:


1. Items for the taking

ROGS brings many different tokens, but it boils down to this: you need tokens from factions to buy faction gear. All factions give same type of token as a reward for quests so it's possible to be doing quests for Yun and still buy Brittle Blade stuff. FC gave players a choice: do quests, get what YOU do like. Don't you hate it in MMOs when you are doing some bullshit quest chain only to find out that your healer can pick from following rewards: Plate of Tanking, Axe of DPSing, and Rings of Stats Useless For Your Class. That's bullshit.

With factions if you put in the time in the end you will get your items. Like always. Without fail.

For me it made all the quests "worth doing".

The amount of stuff to chose from is what I don't like: did FC run out of items? Yes, you can get armor for each tier, BUT not all factions will have an armor for your class, and even if they do have it: it might still not suit your style. You can get Weapons and Accessories, but all of them are RANK 4, so welcome to months and months of rep grind before you can get 1 item. FC should have made the W&A items also with different ranks and scale their power like they did with armors. You are not a raider? Then you will be stuck with your blue culture crafted, gem stuffed weapons and accessories for another couple of months. Sorry!

The factions are very unique and diverse. You can't mistake one for another. Here is my personal breakdown of factions most interesting for assassins:

Priests of Yun - spooky bastards (ingame quote). I love their dark vibe. They are often found either dissecting the dead or praying to their skull faced emperor of the underworld
You might be interested in: ring and several pets in a form of lotus that damages/stuns your opponents or heals you.
Brittle Blade - coolness factor 11. Not only they are sporting best looking assassin armor in game, but also have amusing NPC quest givers (checkout the guy in Grass Lands - fat assassin :D)
You might be interested in: armor, ring with protection death tree pet (syphons mana and stamina)
Shadows of Jade - they are thieves, plain and simple. I have joined them in the beginning, but after a while it felt like no matter how hard they are trying they are just not as cool as Brittle. Imagine this: Brittle Blade asked me to kill Jade's officer and to stuck Brittle's banner over his body so it looks like "an act of senseless aggression" (I guess quest giver didn't want the Jade to think that Brittle was simply executing some one's contract and that it wasn't personal when it totally was).
You might be interested in: armor with high dex. Their armor looks very plain compared to what other factions are sporting. I especially don't like the mask.


What I don't like: special mounts (tiger and wolf) are given by factions that are uber assholes: Wolves are dumb, ruthless raiders and Tamarin's tigers are ruthless too, but also cannibals. I don't want to raid barns and make "woo" (in game quote) to the peasant girls nor I would like to "feast on our enemy's flesh" (side note: if you are weak your ass will end up in a stew for all Tamarin's to enjoy for supper). I have picked my factions based on two things: items and how they are relating to my character. Even thou I don't RP in my mind my character is pretty rounded up and I just can't see him joining Wolves or Tamarin's. In my mind its something that he would just not do. I know that it is pretty silly, but I can't commit my time and effort to a faction that I don't like (I have betrayed Jade and Yagkosha while having 20k faction in both, just because I didn't enjoy the story and feel). Still I do want to explore "epic quest" leading to your epic mount. Perhaps one day when I have everything else I will join one of those factions, but as for now - can't see me doing it now.

I have imagined (for some unknown reason) that Tamarin's Tigers will be monk-like faction, more on the spiritual side. Giving epic pets to two "asshole" factions is certainly interesting because I would never even consider joining them otherwise.

Ah the faction quests: there are no "Yes, *click*, yes, *click*, goodbye" dialogs in ROGS. You really have to read the text and think atleast a little bit. While talking with Hyrkanian NPC (those fuckers love their horses) when asked to prove my raiding skills I have ansered: I don't want to ride some stinking animal to prove anything. What happened? The NPC took offence,scolded me for saying it and removed 300 faction rep. Nice! Another time I had to get back stolen gold for Last Legion from...Jade (thieves). They only way to make them pay was saying that the gold will aid Last Legion and in the end will strentghen the Empire. Jade needs strong Empire with it's people's pockets full of gold in order to steal from them.

The quests themself are also pretty interesting game mechanic-wise. In one quest for Hyrkanians you have to get yourself bitten by a cobra 10 times and get back to shamman so he can extract the posion from your wound (they are tipping arrows in that stuff). So you go find yourself a cobra and as it strikes you you get posion stack. The trick is: getting 10 stacks before you die or the cobra dies (you need to hit it in order to get the stack) and to kill or stun/fear cobra on 10th stack because you get 5m debuff that will let any mob oneshot you. The debuff is removed by shamman when you are returning the quest.
Other great quest to mention is defending Pin-Pin against Wolves of the Steppes raids. You simply go to the barricades with other soldiers from Last Legion and together you are pushing back the wolf raiders.
You can checkout all faction's rewards on http://aoc-is.better-than.tv/factions.php
Posted by Slith at 8:58 AM

Hey great review, I also took jade (and now wanting to change to Brittle) - but I don't know how the fuck to do it...

Jade's got their boring "Go to each corner of the map and pickup a note" quest, which I've done like ... 5 times and is already sick of it...

Other then that, i would also enjoy the new PvP zones - if I were not getting Memory Leaks for the first time ever, that is