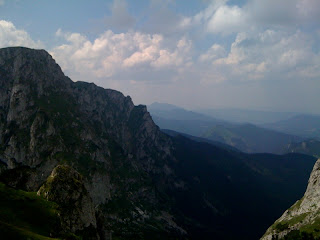 This post has been on my mind for a while now. I live very close to the Tatry Mountains in Poland and I often visit those for summer hiking or skiing there in the winter.
During the winter time or when its raining those mountains resemble Cimmeria in every way:


It was a gloomy land that seemed to hold

All winds and clouds and dreams that shun the sun,

With bare boughs rattling in the lonesome winds,

And the dark woodlands brooding over all,

Not even lightened by the rare dim sun

In those mountains lived Jerzy Janosik (or Juro, Jurko). He was a chief of a band of robbers (not so merry ones). According to the legend Janosik was stealing from the rich and giving to the poor (just like Robin Hood, minus the bow) and generally protecting people from oppresion from the local establishment.

In reality he lived between 1668 and 1717 and probably wasn't even half as noble as the legend says.
During the 70' Polish television was producing and airng popular TV series with Janosik. Janosik was played by outstanding Marek Perepeczko - just look at that guy! He could have easily played Conan himself. 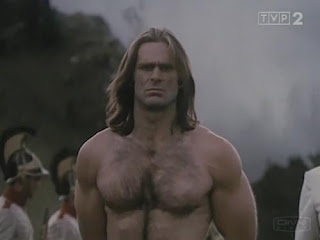 Keep in mind that the series were made in 1970 in communist Poland and that at that time bodybuilding was a niche sport even in America. Still he looked very impressive.
Janosik reminds me very much of Conan during his time in Ghulistan where he was a chieftain of Afghulis.
In TV series Janosik kidnapped the Duke's niece with the intention of ransoming her and saved his friends from execution. Conan did the very same thing: he kidnapped Yasmina the Devi so governor of Peshkhauri, Chunder Shan could not hang some of the captured Afghulis.
Also in that story "People Of The Black Circle" Conan was wearing a magical belt given to him by Khemsa. Janosik was also wearing a magical belt given to him by Maryna the witch.
Furthermore Janosik just like Conan was a tall, strongly build mountain man and a very able fighter. Now days he is often portrayed with a head full of long, black hairs. People living in the Podhale region of Poland (next to Tatry Montains) are called "Górale" and in the polish translation of Conan that world was used to describe mountain men of Cimmeria.
I don't have to mention that both Janosik and Conan shared their lust for women and booze.
You can even buy a pretty good beer called "Harnaś" advertised with with an animated TV ads that are featuring Janosik-like character. The ad doesn't really say that the character is Janosik, but its very much implied.

I am going to leave you now with some Góralska music from Podhale region.
Mind you that it's dreadful to listen to while sober. However its my beer music of choice.
Posted by Slith at 2:16 AM

Janosik is slovakian national legend. he born in Terchova.