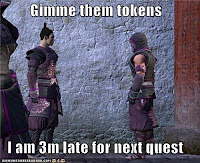 I am not going to get into whether the grind is good or not (it’s not). If you have already decided that you want to get into Khitai content then this is a guide for you. I will take you step by step into getting 60 MoAs in 50m, every time, without fail.

I have heard that with some faction combination you can do 100 MoAs per hour. I don’t know about that. My guide focuses on doing quests for all factions so you will be progressing with all of them.

To get the best MoA per h you will need to be fairly advanced with each of the factions to get the best MoA worth out of the quest. How do you get to rank 3? That’s a whole different story and I won’t get into that in this guide (or at all). Just remember that the hardest part is rank 1 to 2, rank 3 takes some time, but you will start getting better MoA return and rank 3 to 4 is surprisingly easy since you will be getting 6000 faction points per 1 simple and fast quest.

The following are my factions choices and my reasoning behind picking them. You might get other factions, but then this guide won’t do you a lot of good.
I won’t be giving out the names of the quests, but I am sure you will figure them out from the descriptions.

What you will need:

Why THOSE quests?
Picking the quests I went for:
1/ speed – those quests give best MoA per h
2/ accessibility – its easy to get them and to return them for reward
3/ synergy – sometimes you will be doing a couple of quests at once or very close to each other
4/ difficulty – those quests are easy, there is very small chance of failure. Its best to avoid quests where one mistake will result in death (like Basilisk quest which gives 5 MoAs but you can get popped out of hide by worshipers and die fast which will result in down time).

Paikang
1/ go to the temple of Yun
2/ talk to Kang and get quest for lotus seeds
3/ exit the temple and take main road to the entrance of Paikang
4/ at the entrance take the main road to the village (near rice fields)
5/ talk to Last Legion Commander and get the quest to protect the well
6/ go to the well and wait for an attack
7/ run without fighting till the mobs stop chasing you
8/ come back and approach the fence behind the well. One mob will chase you
9/ Run away and the quest will fail. You have to find Yag kosha Npc with the cure
10/ run to the Yag Kosha NPC through rice fields
11/ take the cure from npc
12/ come back through rice fields
13/ on the rice fields gather 10 lotus seeds
14/ come back to village, add cure to the well and return the quest to the Commander (7 MoAs)
15/ take the main road to the entrance to Paikang
16/ go to the temple of Yun
17/ return the quest to Kang (7 MoAs)
18/ port to Grass Lands via Patch of Asura

Grass Lands
1/ run to the Hyrkanian village
2/ mount up
3/ take snake bites quest, capturing a horse quest and riding and shooting dummies (in that order!!!)
4/ ride and shoot dummies
5/ beat a horse with a whip (use atrophy and cats paw to avoid damage, use the whip and the active blocking until the whip goes off the cool down, CCs won’t work)
6/ run to the craters with demons – you will find plenty of snakes there
7/ attack the snake with one directional attack (no combos!) so all of his shields will go into direction of your attack (this is what you want). Use dull pain to lower the damage.
8/ watch your poison stack – when it goes to 10 then CC the snake and run to the Hyrkanian Village
9/ allow the horse to return to Feng NPC. Turn in snake quest, turn in horse quest, turn in dummies quest. If you turn in snake quest first the horse that has been following you will disappear (6 MoAs)
10/ mount up and ride to the Kara Korum

Kara Korum
1/ Take quests from Yun NPC: collecting souls, throwing corrupted into pyre
2/ Take quest from Brittle Blade NPC: collecting bones
3/ Take quest from the board: collecting dark water (keep taking and deleting the quests until you get this one) (it gives 5 tokens)
4/ Talk to the corrupted in front of the quest board and walk with him into the pyre (do not sprint or the quest will fail)
5/ from the pyre take left and talk to Jang Shi NPC
6/ take quests: collecting skulls and leading jang shi out of the town
7/ run to the jang shi with question mark on the bridge at the entrance to town
8/ lead jang shi outside. Sprint, count to 4 and stop so the NPC can catch up. Repeat.
9/ outside the town, after leading the jang shi through the bridge and finishing the quest, take quest from Last Legion NPC (collecting meat and armor)
10/ mount up
11/ run straight ahead and take the second right
12/ talk to alchemist NPC from Yun and take red rocks quest
13/ collect armor, red rocks and dark water while killing the hounds for meat. All of those can be found in one place. Figure out a patch that will lead you to Kang Zai skeletons. Before you reach them you should have those 3 quests done.
14/  keep killing Kang Zai until you kill 30 of them. This will complete 3 quests at once and give you whooping 19 MoAs
15/ Mount up and rush to the Last Legions camp to take quest involving killing spies. Its easiest quest in game for 5 MoAs. Just kill every NPC in the nearby bushes.
16/ return to the village and turn in your quests.

If you want to score 70 MoAs per 60 minutes then during the chain do these extra quests:

1/ Chosain – 2 quests from Brittle Blade (easy ones, will give 2 x 2 MoAs)
2/ Grass Lands – 1 quest from Hyrkanians: riding around the camp (1 MoA, 1 minute)
3/ Kara Korum – killing the basilisk for Yuns (5 MoAs, do it when you are killing the spies for Last Legion).

I think that it’s very much possible to do more MoAs per hour, but the problem currently lies with the two factions: Last Legion has only 1 repetable quest in Paikang while Brittle Blade has NONE.
So Scarlet Circle and the Shadows of Jade might in fact be a better choice, at least MoAs wise.

Tips and Tricks:
-    use sprinting and accelerated whenever you can
-    dieing during questing is not an option
-    always look for ways to tweak and optimize your route and questing rotation
-    in Kara Korum look for special buried treasure (on my route I have found 5 such spots and I am digging them every time)

Good luck and don’t die from boredom ;p.I am listening to podcasts while doing my 50m route.I recommend my favorites: Stuff you should know (itunes) The Instance (itunes, I don’t play WoW but DAMN that’s professional podcast!!!)
Posted by Slith at 9:56 AM