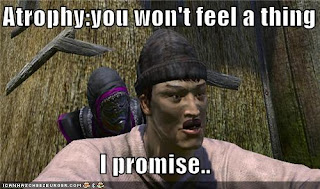 This is EASLY my most favorite feat of all. It has always been since day 1. With the 1.6 revamp atrophy became 2/2 feat that gives -30% melee and magic damage debuff. Its instant, fast, it can crit very well, does AOE dmg/debuff and has extremely low CD.
Best of all: it has its uses both in PVP and solo PVE and costs no shards.

Atrophy as an opener
This is the first and most common usage: atrophy is instant, does pretty decent damage and can debuff greatly so double tap forward to gain momentum and unload atrophy on the opponent.

It’s a win/win scenario because:

1.    if you get momentum stun: you have gained valuable seconds to proceed with another nasty trick and as your opponent comes out of the CC he is greatly debuffed. Note that you can upgrade momentum via AA perks so if it procs it will deal extra damage (so basically its an upgrade to Atrophy damage)
2.    if you don’t get the momentum stun: you still have dealt damage and debuffed your opponent. You can follow up with instant CC or take advantage of the remaining 9s of debuff and save CC for later


Atrophy during CC
The first thing your opponent will do after coming out of CC is most likely CC you back. When your enemy is CC there is only so much you can do: you can apply GC+SS or other miasma combination and the CC duration should be about over. However there is still time for that sweet, instant atrophy to drop. Whatever retaliation your opponent will inflict on you after the CC is over with atrophy it will be 30% less severe. For example that cuts 3000 damage from detonation to 2100 saving your ass from suffering 900 more HP loss.
One common mistake is applying atrophy as soon as CC starts which will lead to the loss of valuable debuff time

Saving team mates
In minigame scenario I often employ atrophy against people who go after healers. 30% debuff usually is enough for healer to recover and out heal the damage while you keep the DPS up. This way you can keep the valuable CC’s for better moment while still making the difference.

AOE and atrophy
Atrophy does cone AOE damage and debuffing. In PVE mobs will stack up and bunch up naturally so you will take full advantage of this. In PVP this is very situational, but the opportunity might rise when two teams clash in the very beginning when they are escorting their flag carriers (on Blood Ravine this will happen a lot).

Atrophy and PVE
In Paikang you will meet quite the number of bosses that you will have to handle solo. Prime examples will be gray apes (Priests of Yun quest) and the dreaded Dark Legion’s Commander. Atrophy makes those a breeze (almost). Also use atrophy as often as you can because the CD is only 45s and taking less damage will result in less down time and smoother progression. Atrophy really shines in Khitai because the mobs generally have more HP than their vanilla AOC counterparts and they are hitting A LOT HARDER. In vanilla AOC atrophy might have been perceived a bit like an overkill (especially since 1.6 assassin’s revamp giving us uber DPS): why debuff a mob if you can KILL it faster? Such is NOT the case with Rise of the Godslayer. I highly recommend this feat especially for those builds that don’t have Avatar feated in – for extra survivability boost.

Atrophy in PVP
Atrophy debuffs both magical and melee damage so its great against all classes. However as you know there are some hybrid classes that employ both magic and melee. Such class in a Hox. Antrophy is almost designed to kill hox.

your whole class is designed to kill hox! :D

... and Xuhotl says "Xotli prices those heralds who are regulary being killing assasins"