Dagger and a bowl of rice ep.7: Solo PVE in Khitai 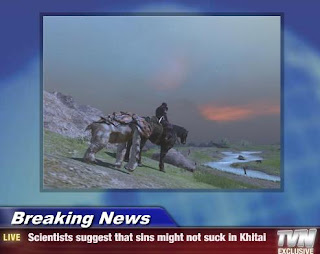 Ah the glorious Khitai, hands down the hardest solo content you will face in Age of Conan.
Contrary to what some people think assassin, if played the right way™, can handle Rise of the Godslayer easily. Personally, at the time of writing this, I have taken Brittle Blade to rank 4, Yun to rank 3 and Last Legion to rank 3 effectively completing all the quests for those factions from Grass Lands to the Paikang – solo all the way.
So how does one get started with the expansion’s content and live to tell the tale? This guide will take you from trader-trash wearing, noobie GC+Soul Strike to the expic set wearing assassin that can pull several +83 mobs  and still stand his ground.
Specc > Gear
I don’t know how vital the specc is to other classes nor do I care. For assassins the specc can make or break you in every aspect. The very foundation of your survival and progression in Khitai lies in Avatar’s healing. Healing and healing alone will let you live through the punishment some mobs will inflict on your. The ability to deal damage is secondary at best: no matter how high your dmg output will be it will never be enough to drop several mobs before they drop you. Where full Lotus build struggles to take on 3 mobs the hybrid can easily dismember 5 or more. True, you can carefully pull mobs and blow all of your cool downs, but the key to progression, and let face it: pleasure of gaming, is ripping the shit out of mobs in a fast and constant manner. This the hybrid can provide.

The specc: Hybrid with Avatar

Of course there are many variations to this build, but nevertheless avatar should and must stay as the cornerstone.
Lets go over the details:

How to deal with pulling 1 mob
As with every pull the CCs are your friend. If you are facing really resistant mob with large HP pull then use the CC chaining.
GC->SDS->Soul Strike (this will apply both stun and explosion)->CC->Swift Strikes

How to deal with pulling 2 mobs
Atrophy is your friend. This will effectively reduce the damage output of 2 mobs into…1.2 mob. It really makes the difference.

How to deal with pulling more than 3-4 mobs or Bosses
This is where the hybrid build really shines and where all other fail miserably. First open with SDS and use lotus dart while activating avatar of death. This mob with the dart will feed you the much needed HP so DO NOT KILL HIM, turn to the next mob and apply GC+Soul Strike. The explosion will deal AOE damage providing much needed spike and HP leech. At the last second of avatar use Death Whirlwind to get the last spike of HP and damage. If there are any mobs left use snap kick and finish them up. There is a good chance that some mobs standing near the ones affected with Soul Strike and Lotus Dart will get splashed with GC or SDS – use Face Stab to take advantage of this and consume those effects for large damage.
With relish in death specced in (+15% fatality chance) there is also a good chance you will fatality at least one mob which can only help you to deal with the rest faster and with less damage taken.
The following procedure allowed me to take down the Dark Legion’s Commander in Paikang, loot his head and still run away to safety. I have to yet face more worthy foe than him.
There is more than meets the eye in that build so check my other guides for more details on some of the feats:
Gear
Once you have your build all sorted out you can prepare your gear. Needless to say Khitai faction’s gear works best for Khitai. If you do not have T1/T2 epics then get yourself Assassin’s cultural gear (Bossonian set) along with some pieces from City Crafted Gear. 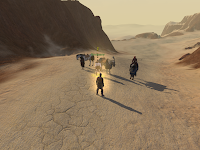 Contrary to the pvp set up the Khitai requires two things from your gear: a lot of Hit Points and Hit Rating. Without HP you will die fast and without hit rating stats you will miss a lot and as a result: die a lot.
I myself have started my journey through Khitai with cultural gear made for pvp (see the guide above) but I have used collector’s edition rings (epic one and blue one with LOADS of HP and hit rating) and also the necklace reward for killing Grim Gray God. Those have made OCEAN of difference.
You can get pretty decent ring by doing “simple”, but rare quest given by the Emissary of King of Zamora. This quest will spawn at random when you chose to defend the caravan during your journey to Khitai. Just keep taking the road to khitai quest and dieing until you meet the Emissary.
This quest involves killing 500 demons (you can kill those in Grass Lands) which might sound really tedious (and it is!), but its not THAT much  of a grind (like hell its not..) and the ring has nice stats on it.
Upgrade your gear pieces as soon as you can get a replacement from your faction of choice: I went with Brittle Blade.
Do NOT worry about MOAs! As you progress through content the tokens will be more and more easy to acquire. Right now I am getting exactly 55 MOAs in 46 minutes  (solo PVE!) and I have heard its very  much possible to reach 100 MOAS per hour mark. Time will tell.
Perks
Funcom did a great job at making perks progress your character horizontally. Trust me: after upgrading a couple of perks you WILL feel more powerful.
My perks are PVP focused, but that didn’t really hinder my progression – there is hardly a need to be switching perks from PVP to PVE mode.
I recommend getting choking powder, liberation (there are very few CCs, but this perk gives great damage) Tainted Weapons and Finely Honed (very few mobs will use shields, but it will come handy both in PVP and Group PVE)
See the guides here: http://forums-eu.ageofconan.com/showthread.php?t=114374

Once you get to lvl 4 with Brittle Blade and Yun you can start buying REALLY awesome pets that will take your damage and survivability to the next level.

And that is it!  May your blades never dull!

new links to builds:
Hybrid with Atrophy
Hybrid with Grave Blossom
Posted by Slith at 8:35 AM

Hi Slith,
nice writeup.
Your "strategy" actually made me go for one more try at this game.
The sad thing is that it is still a ridiculous grind-fest, and after a couple of hours I could almost hear Craig and the boys laughing all the way to the bank as I was actually paying for running back and forth doing the same brain-dead missions yet another time.
It might be true that the MoA's come easier after a while but right now I'm running around Shaulun and finally got my first 180 MoA's... and then I have to fight my way all through Kara Korum only to find I can only by a ugly pair of baggy pants?

How you guys are able to get to Rank 4 while still having something resembling a real life and staying somewhat sane is beyond me.

The game is beautiful and the setting is so cool... I want to like this so much, but after paying tax to Funcom for two years now I think its time it comes to en end. This grinding actually makes me feel like I'm fooled, and I don't really need that.

Been great following your blog though, lots of good stuff.

I am doing no more than 45 minutes (and exacly that amount) of solo PVE 5 days a week. I too have a job and a life to manage so I have to scheldue my playtime :)

As you progress through Kara Korum the fact rep and MOAs are fast and easy.

3m quest giving 6000 rep and 5 MoA? Thats not that bad and there are even better ones in Paikang.

Yes, getting rank 4 with wolf/tiger faction is HARD AS NAILS, but the other "main" factions are do-able.

and yes consistency will make your experience grindy, but trying to "DO" the expansion in short period of time will make you crash and burn because, in fact, it is overwhelming when you think how many moas you will need. Still there are some quests that I am doing every day and still enjoying (slaying Basilisk would be one of them). I am not defending ROGS because you have valid point. There are a lot of nice one-time "story" quests that you get, but the rest is re-doing same stuff and it can get old fast.

Its your call: I can understand both sides

Thanks for expanding on how you schedule your play.

I agree that trying to do the expansion in a short time would not be a good idea, and it is certainly not designed for that.
I can see that I might have come off as a bit of a whiner complaining about how hard it is, but that was not my intention.

The thing that breaks it for me is not really the number of MoA's needed eihter, but how we get them.
Like you I have somewhat limited time to play, and I like for it to be fun... not a chore. Getting some of the goals (be it gear or mount or whatever) will certainly be cool, but right now the road there seems not so cool.
Maybe I should approach it as a strategy game instead of an adventure, as in "how to maximize efficiency of moa gathering".

There are quite a few "get 15 of this" guests in the old content too, but it seems to be more variants of them and more constant progression in story. Actually... sometimes I think the leveling in the old content was a bit to quick. Whenever you got some cool new gear it would only last a short while before getting obsolete.

Anyway, I still have a few months left on my sub, so I might give it another try after new year :-)

Great guide, however the link for the build is a YG page and of coure they are no longer. any chance youc oculd update the build into another feat builder and edit the link?

done, check out the edited section in the guide