Winter event: the event that works 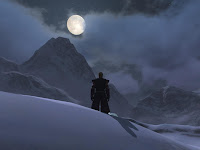 After less than desirable night of the lost souls II (almost as bad as Highlander 2) I was very sceptical about this even. "Event in Age of Conan?" I thought "then we are going to see some reused villas for sure". Using villas in events seemed at that point like a permanent law.If you are going to a strip bar (not that I do) there are bound to be some boobies in there (or so I have been told).
How, oh how I have been pleasantly surprised when I found out that the new even not only doesn't have villas in it, but also can actually pass as event: it has story.
The story might not be some dark schemes cooked up by resurrected mage of ancient, dreaded Acheron, but something that actually fits tribes of the North. Vanirs have crashed the party and the Aesirs need some help so they don't get their ass handed to them. First thing you will notice are the beautiful visuals: the zone is just done right.You can almost feel the chill cutting to your very bones and your breath freezing in the air. While Cimmeria might not be a perfect place for summer vacations, Aesirs have to endure much harsher, colder environment than their dark haired neightbors. Apparently the zone is located high in cold-ass mountains of the north. Perfect place for late night drinking.
You arrive at the event hosted by Aesirs when the Vair have already crushed their enemies and are listening to the lamentation of their women (which, of course, is best in life). You can decide if you want to get party together and crush back your enemies or disguise yourself as Vanir and go rogue on their asses. If you choose the stealthy solution you can do a lot of mischief around the camp from burning people alive in their tent, to getting them killed by enraged mammoth in heat (ok, I am making this up, but those things are pretty pissed) and finishing by good old fashion alcohol poisoning. In other words you can interact with a lot of objects in the even and see the horrid results (for the Vairs, you of course ,will laugh your ass off). This event has even cut scenes!!!111oneone While those might not pass as the masterpieces of modern in-game cinematic they are nice touch and at the very least show that the devs  have spent some time on this instead of going "copy/pase, villa, lol".
At the end of the event there is some "forced" social content when you "have" to get someone to drink virtual ale with you to complete the quest. I think people who actually RP in game or have friends (unlike me :X) will really enjoy the celebration itself. One thing was missing thou and its the merry, drinking music. Everyone was dancing, but no music was being played. Come on, give us some beer music :P 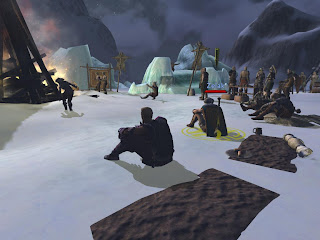 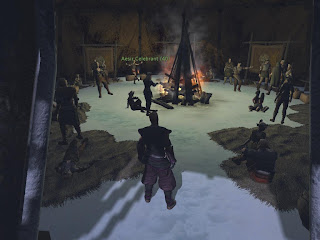 The rewards, as always, are visually pleasing and totally not trashing material (unlike pict on the stick, what the hell were you thinking Funcom?).
So to sum it up: if Funcom builds up more yearly events like this they will be on the right track.
...and no more damn villas, m'kay?
Posted by Slith at 1:11 PM

I have done a lot of them before ROGS

what I don't like is abusing villas by throwing in some dumb quests from bullshit event :D

how to start this event quest?