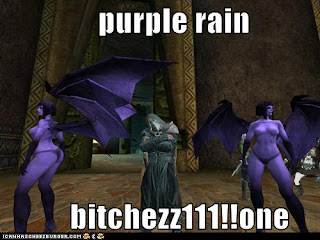 I have always had 3 main issues with Age of Conan. First being the looks: everyone looked the same. Constantly looking at same, plain, dirty armor that everyone on your level is wearing. Luckily the vanity armor tab fixed that and now I am constantly amazed how creative people can get with their style.

Second thing is crafting. Lets not beat the dead horse here. Luckily, again, the current system is getting burned to the ground and rebuild from scratch. Last, but not least: the world drops.

Age of Conan has the hands down THE worst looting system I have ever seen. The worst. Pretty much all the mobs are dropping is trash, hardly worth picking up. I personally really like the world drops. To this day I remember my low level epic mace that dropped on my +30lvl Rogue in World of Warcraft many years ago. That felt great. I think that a large part of a pleasure that comes out of playing an MMO is that feeling of hope that perhaps, just perhaps, the next mob will drop something really good. When you could get epic weapons in the Villas people used to play those non-stop and there were no complains that it is boring or repetitive (hell, I like to re-visit those from time to time even now). Then the purple rain came. For those of you that weren't here in 2008 to experience it: the mobs in Potains (back then Potain was infestedwith demons for no reason whatsoever) were dropping blue weapons on each kill and epic weapons every couple of kills. It was insane, obvious bug. Funcom's solution? The removal of epic world drops from the game *face palm*.

With the Khitai expansion came the loot bags. Now, I like the very idea, but hate the execution. While epic weapons can pop out those bags (I have seen those on trader) it is very, very, very, very rare. That and the drops are not really comparable to vendor sold epics. I am running my Khitai quest rotation daily and on average I get about 12-15 bags (those advanced ones). To this day I got only about 5-8 BLUE weapons out of those. I think I have easily opened couple thousands of bags and got few mere blues. Great.

Room for improvements? I am not saying that mobs should shower players with epics (trust me, tried that with bugged demons and it gets boring fast :D), but player should be rewarded from time to time for his efforts. Social items, nicely looking blues, crazy mount, or even pet would have been welcomed.

If the crafting system was working I would have at least be pleased with the crafting materials drops. After 3 years I have 3 bank characters JAM PACKED with crafting stuff and that is after helping my guild reach renown lvl20 through crafting.

But seeing how vanity tab changed the game for the better (can imagine now playing without it) there is still hope that crafting will again turn the tables for Age of Conan.

What is the best stuff you have gotten out of your solo PVE in the open world in Age of Conan?