I am more lost than these souls.. 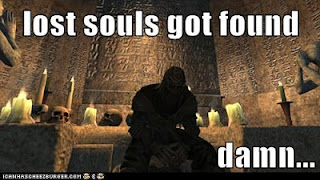 Once again we are here to find that what I hoped would be lost forever: lost souls. I know I that I have said that I probably won't report on this "event" anymore, but I am compelled to do so...Just like the lost souls are compelled to return to haunt me each year. So what is in the bag for us this year? Get this: same stuff. Yeah, it is not even "more of the same stuff", kind sir, it's rather "EXACTLY same stuff". Funcom decided to go 100% lazy and simply re-apply the content from the previous years. Re-apply? Yeah, same quests, same items, hell even the visual effect in villa is same red mist-bullshit.
So you can now get all the rewards that you have missed for 3 years straight. I find that offensive. I have been subscriber for those last years and I was there for 3 years to repeatedly "find" the lost souls and claim my rewards. That is what makes the rewards unique: those are showing that you are veteran players (big epeen). Remember that cloak we got for 4 years anniversary? Yeah, would you like to see it given away again in two years? It devalues your "old" item while providing no new rewards. It's a double slap on the cheek for the veterans. Hell. You know what? Screw it, FC can give out old rewards again if they want, but I am getting screwed on this deal as paid subscriber. Yes, we got used to your yearly "copy/paste, villa effect, lol" content in the form of "The Night of Lost Souls", but providing ZERO new items is just offensive. Last year FC recycled NPC uniform in the form of Red Hand's tunic. It would have taken next to none effort to recycle some other item too, but Funcom didn't. I am hoping that this "no new stuff policy" is due FC being busy with SDS content updates which would be understandable.
In the future I would like to see major changes to those events, but I am pretty sure that we will see same thing next year. Oh well, you know that I will be here to shit all over it again. See you next year, souls..
Posted by Slith at 1:22 AM