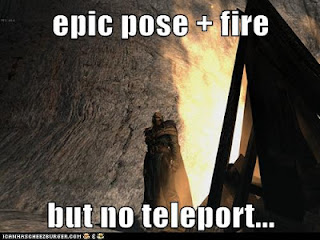 As you know I am PvPer and in pvp things happen that can make you want to grab your keyboard and smash it against the wall. That's cool. I can respect that quality of character. Matter of fact I always keep plastic bottle of water near me when I am pvping. Why? One is hydration is good for you. Duh! Second: I can smash that bottle in anger and not be regretting that later (like smashing  50 EURO mouse..). What makes people angry in pvp? Well, bullshit in general, but to be more exact: losing to bullshit....lets just say losing in general. Losing is not cool. There is nothing good about losing duel, minigame or whatever. Lets just say that is universally NOT desired outcome of any pvp encounter. We can all agree on that, RIGHT? And what do people do when they lose? Most suck it up with silence and dignity and I salute those brave men and women of Hyboria. Then there are some that, THE VERY SECOND things don't go as expected, they get up and scream: HAX! HAXORZ! Cheats! How else those unbeatable heroes of Conan's era would lose in PVP if not for obvious hax?
I AM being snarky here because the truth is: sometimes you fuck up and die, deal with it. Therefor I have never played the "blaming game" when it comes to PVP. Since 2008 I haven't seen one pvp encounter in which I would clearly say: that is someone running third party software to alter the game (aka "ZOMG THAT IS HAX!"). Sure, we all have heard epic stories of people doing some funky stuff in pvp and the forums are filled with videos of so called teleports. Are those true? In most cases I would say it is a lag that is desyncing the player's client and the server resulting in game not registering all the movements. I like to believe that, it keeps me sane. If I lose in pvp I just assume it is my very own fault, smack the water bottle around and move on with my life. That is smart thing to do, that is right thing to do.

Well after that rather lenghty introduction I am going to drop the epic story on you: I have witnessed the real hax! It was few days ago on the map Lost Temple. My team kinda overpowered the opponents so we were holding the bridge and they were on a nearby cliff that leads to their spawn (mages like to stand there and spell weave and this is what they did). There was this ranger that pretty much was trying to snipe our cloth users (with little to none success I might add). In one of our merry chases after this ranger he did strange thing: when cornered and with about 50% health he turned around and simply jumped from the bridge straight into the lava. Now you know me, I am sadistic stabby stabby kind of guy so it was natural for me to go to the bridge just to watch him burn. To my deepest disbelief he landed in the lava, took several steps and..at this point he should have been crispy, fiery and umm...burny. And what happened? He literally LOOKED UP and SWOOOSH next thing I know (literally in a second or so) he was standing near the necro and that cliff, raining arrows at us!!!!

Pwnt? Turns out: not so much.

I made a quick petition and oddly enough in 2 minutes the GM was talking to me and promised to take immediate action on this matter. I have no idea if that ranger got banned, but having GM respond so fast was super nice.

There you have it: my epic hax story. Do you have your own to tell? But please  GOOD ONES :D

I have my own and it's quite funny :-) http://www.youtube.com/watch?v=Oab1L33kvVE

Ahahah that's funny man!!
Especially because I perfectly know the feeling!
Especially now that I'm dealing with the phantom armies in GW2 where the mesmer can make 24+ people disappear in a heartbeat to reappear behind you and spank you!
If you're lucky enough you'll noticed them after 3 or 4 seconds due to an issue on the graphic engine, but let's admit it, it's a tactical miracle to have this skill :D

The part I am having the hardest part believing is that a GM responded in 2 minutes! That is so amazing it could be considered hax!

PVP bottle? Too soft, dude. I headbutt the desk since I started to play MMOs. Nothing has happened to the desk so far.