Sand and Jagged Rocks ep.0 - before it goes live 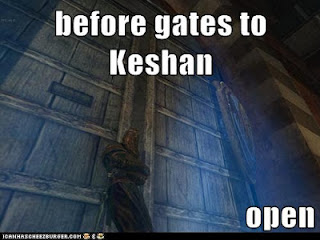 Since my "dagger and a bowl or rice" series have ended I have decided to start a new one for the  Secrets of the Dragon's Spine content updates (SDS). Before I go into what we already know about SDS I would like a ponder a minute about Savage Coast of Turan: it was SUPER BAD. Months after it went live I can tell that it failed in almost all areas. Right now mine and, I dare to say, my fellow players biggest woe is painfully evident lack of content that Turan failed to provide. First of all the two solo experiences: Dead Man's Hand and Isle or Iron Statues were an overkill. Iron Statues dungeon is a master piece and most clever use of the lore I have seen so far, hands down the best thing that came with Turan. Dead Man's Hand, on the other hand (see what I did here?) is just weird and unnecessary. The weirdness comes from the size of DMH because it is largest solo experience so far. BUT at the same time DMH is super thin on content and can be beaten in one play session. To add insult to injury the instance is still solo even thou many RPers asked for it to be opened to two people or so. With it's pretty decent design I see now reason why this place is only for soloers.I deem the DMH the worst addition in Turan pack. Second thing that got under my skin is the Fort dungeon. Same as it was with recent House of Crom blunder the Fort is just so poorly itemized that it takes 2-4 re-runs to get what you want and never come back. Yes I know there are blue items there and yes I know some use it for vanity. The problem is that at the same time people can run Khitai HMs and still get epic gear and tokens the easy way. Why would anyone go for harder stuff? Fort is still very challenging, more so than any Khitiai HM except Pillars (maybe).  I have to give honorable mention to Turan's Boss Area because devs managed to create very hard boss encounters for mediocre gain resulting in absolutely zero interest from the players. What were you thinking?
The nail in the Turan's coffin was lvl 50 zone. If I had to point to a SINGLE mistake that costed Funom dearly I would have say: making Turan outdoor area for lvl 50. If there is one thing I can say about quests it's that there is an abundance of them. I am currently in the process of playing with my Comgall the barbarian because I want to experience the pre 80lvl content I have so eagerly pushed through in 2008.  I cannot really understand why there was a need for another pre lvl 80 area. The only thing I can think of is Funcom wanting to draw in players with free lvl 50 character offer and lvl50 zone that is tied to the Conan the Barbarian movie. Seen the movie and loved it? Now jump into Savage Coast of Turan and help Conan's friends to do stuff. Too bad the movie sucked. Guess FC bet on the wrong horse there. As a direct result of that decision many veteran players (me included) are stuck in the limbo of no content: Khitai is loooooooooooong beaten and played to death and the Turan doesn't provide entertainment for lvl80 + people.  Last thing is T3,5 raiding. I have no say on raiding since I have done so little of it (completed T3 and 2 bosses in T4) but Temple of Erlik seemed to be a very weird concept when T4 was unfinished. Bah, no matter.
Now we are ready to go to the Keshan and to face new challenges. As you know recently Game Director did some SDS reveal and talked about the features of the add on.


Progression
First of all there will be no new means of progressing your character. The secret addition is NOT what I have predicted (leveling up weapons) but rather set bonuses to the new armors. I remember that back in 2008 set bonuses were a hot topic and the devs said that not putting them in AOC was a conscious design decision so people don't feel forced to always get the full set. With the vanity armor system in place I can see why FC would like to bring back the set bonuses. The idea is OK but I wouldn't say it's a means of progressing the character. However the crafting system will allow players to level up the professions and  I think THAT will scratch the progression itch that I have (I am lacking 5 perks to be maxed out on AAs).

Area
The SDS will have a big out door area just like in Turan. Since the add on is advertised as "aimed at lvl 80+ people" I think it will be on par with Paikang zone when it comes to difficulty. I wouldn't mind it being even harder. The area won't have Khitai style faction game play, but it might have faction mechanics as a means of progression through story and a limitation of access to items. Turan had it with it's hidden Hand of Glory faction.

Armor
I am not big fan what I have already seen in terms of armor design. The tribal influences on already Stygian-a-like armors are not really my thing just like Turan didn't bring anything I liked even remotely. In terms of power the items will be on par with T 3.5 raids and set bonuses might even bring it closer to T4. Sadly it means that PvP armors will get more and more out dated when it comes to stats budget so we will see more PVE armor in PVP. Or will we? The crafting revamp WILL bring components that will only drop from players so we will be able to craft pvp dedicated items. Perhaps the crafting will help the bridge the gap between  more and more powerful PVE items and PVP armors that are stuck in 1.6 reality.

PVP
Sadly PVP (apart from pvp related crafting) will be the last addition in the SDS series and it will be only 1 new minigame map (either 6v6 or 12v12). It very much so feels like too little, too late, but at the same time I have to admit that I rather like the system changes we had this year. When it comes to system that have large impact on PVP we will see Siege revamp and Stealth revamp at some point in 2013. I won't beat the dead horse here, it's pretty bad and the future looks grim for the seasoned pvpers.

The Future
The new dev letter hints at Funcom planing to continue to revamp old content and introducing new modes for old dungeons. This is smart. I really hate when good stuff is left in the dust just because it is no longer relevant. SDS has a great potential to finally get people out of Khitai and straight into new stuff. I, for one, am optimistic about AOC's future, but defeniatly nothing I have seen about SDS got me excited...so far.

Pretty same views what I have. Especially feelings about Turan and theme of new action pack. No more sand, it gets in my bum and I get irritated!

Turan was a lower lvl area only few places for higher lvl. The new area will be for high lvl only. i am really excited for this and i bet it would be more fun to have one area in fury to get all the ppl, i think it will be a revive to open world pvp.