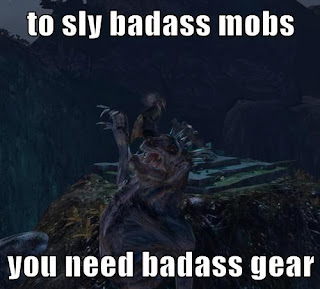 In a sudden turn of events CirithGorgor, a Senior Designer at FC, deiced to post full loot tables for upcoming unchained dungeons, thus effectively changing a bullshit policy of making the players data mine all the loot. You can find the post here.

This is smart and it makes giving feedback all that easier. So I am going to do JUST THAT, give out feedback on the new loot from Assassin class perspective.

I will give feedback by comparing new loot to the Khitai gear as it is, by far,  a best benchmark for all upcoming content. Why? Khitai gear provides best balance of power and accessibility which pretty much translates to one of the best gear in game that is one of the easiest to get. Nuff said, lets get to work: 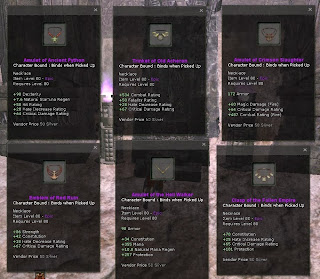 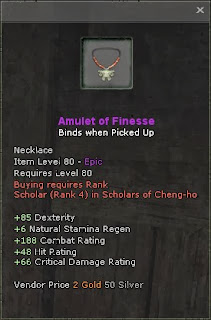 Amulet of Ancient Python vs Amulet of Finesse: while Finesse still provides superior punch in terms of raw DPS Python gives that -hate rating. However I don't think that the trade off is fair enough to make Python a viable alternative to Finesse. As it is right now I would keep Python in my inventory for the fights where the tank is badly geared and I would need to up my -hate and downgrade my gear at the same time.
Suggestions: bumping up dex to 100 and hate to 30 to make it slightly more DPS friendly. Make it Dex based.

Trinket of Old Acheron vs Amulet of Finesse: Acheron offers great alternative to Finesse and the fatality rating is almost tailored exclusively to assassins (which I like). With the right gear configuration assassin can hit very high flat fatality chance which is great for solo PVEing. I very much like the fatality rating on it, it is VERY viable stat for assassin.
Suggestion: remove -hate rating. Having -hate makes it superior to Pyton and Finesse at the same time. Python should be low DPS but good -hate, Finesse should give balanced stats with hit rating and Acheron could be a raw DPS. 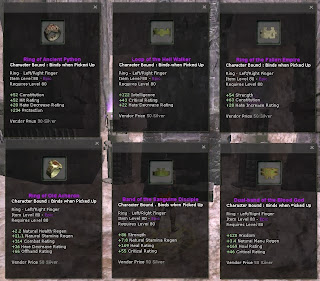 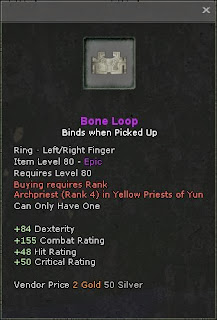 The rings are pretty unique so it is hard to find a good rings to compare them to. That means GOOD design right off the bad.

Ring of Ancient Python vs Death's Ward: While Ward gives great overall mitigation and protection and Python is more specialised ring with group PVE in mind. The -hate seem a little low (especially compared to Acheron ring).
Suggestion: downgrade the constitution to 50, but bump up Hate to solid 25. I am not even sure that -hate is the right stat at all for this ring.

Ring of Old Acheron vs  Bone Loop:  An awesome example of fair trade off in terms of stats. Bone loop pack a whooping 407 CR which is a clear advantage over Acheron's 314 CR, BUT Acheron brings great -hate and a offhand rating that shines in those long raid fights.
Suggestion: seems like a very nicely made item already. 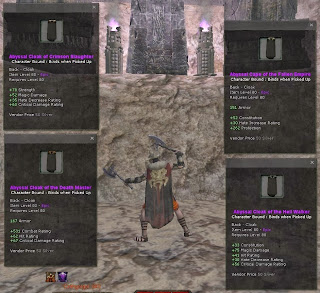 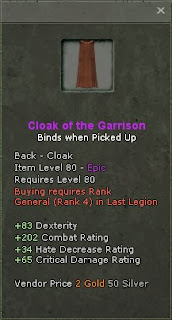 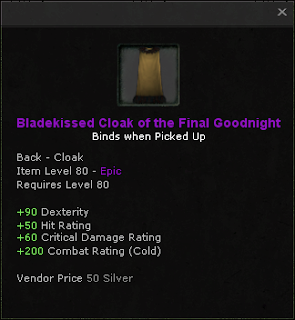 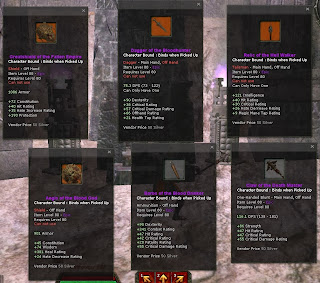 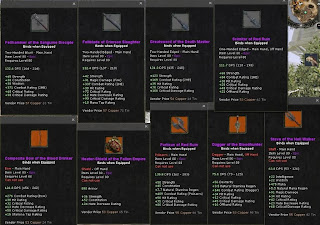 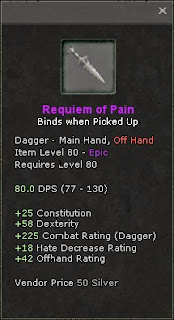 Dagger of the Blood Hunter vs Edge of the Night Spirits vs Requiem of Pain: I don't like new Hunter dagger at all. Requiem of Pain provides great 80 DPS just from base weapon damage and nothing post T3 that is not T4 comes close to that. I hate that all non-raiding daggers are trash when it comes to base damage. Night Spirits can get away with low base weapon damage because those are pretty unique. When you get two Night Spirits you can great fatality rating (top that off with Relish in Death feat of +15% base fatality chance), great offhand rating and decent cirtical and bonus critical.
Hunter brings a BIG NOTHING to the table: it doesn't have the raw DPS of Requiem not the uniqueness of Night Spirits. Lets check out the stats: base DPS is 0,3 behind Spirits which is a bit "no-no" right off the bat. Same DEX, much lower crit related stats and a 1 point better offhand rating. The only difference is health tap rating which pays off when you have good DPS which you won't get with this weapon. I am not sure what I am supposed to do with this item: it's not for raiding, it's not a DPSers wet dream and it can't be configured into any special build (as Spirits can fit into offhand/fatatlity chance build).
It needs to be teared down and made again from scratch.
Suggestion: base weapon damage needs to be 80 DPS, second you need to decide what is this weapon for. I would suggest making it -hate as there isn't really any good starter raiding dagger. Health tap can also make it a good solo PVE stat, but there are better daggers for solo PVE. 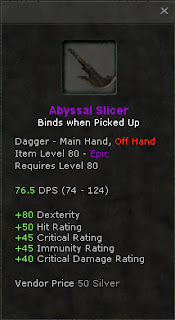 Dagger of the Blood Hunter (BOE) vs Abyssal Slicer: first I thing that I have noticed is a spelling error as "Blood Hunter" is spelled  "Bloodhunter" on the second dagger. I am not a big grammar guy but make up your mind about spelling and stick to it :D  This dagger is BOE so I figured it is a some kind a of starter dagger that you can get off trader. It offers too much DPS for a BOE weapon as compared to other unchained BOP drop - the Abyssal Slicer. First off base DPS is the same which is just wrong but it gets worst: flat CR is higher of BOE Blood Hunter with 314 as compared to Abyssal's 240. Furthermore Blood Hunter is offering more varied and usefull stats making it a clear choice over Abyssal.
Suggestion: lower base DPS to 74 and trade off some stats for a little bit of constitution and higher hit rating, thus making it a perfect starter dagger for someone going into Khitai. Right now it makes all previous, old world epic daggers obsolete (Widow's Pain, Scorpion's Pray and that golden Khitai dagger) and it also rivals Abyssal too much for BOE weapon. 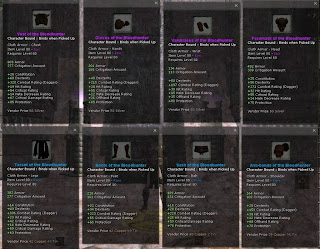 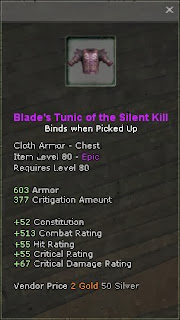 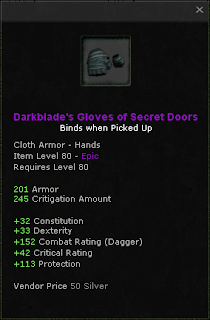 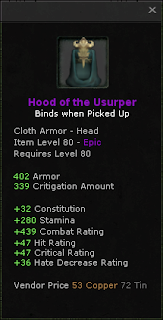 Again this is hard to compare because the stats composition is pretty unique. I will try to analyse different pieces from different sets.

Vest of Blood Hunter vs Blade's tunic of silent kill: same armor and critigation. Blade is all about CR which it has 513 of. To my surprise Hunter isn't really all that far behind with 500! When it comes to constitution Blade is doubling what Hunter has which makes sense as Hunter has other stats that suggest it's different application. Blade's superior hit rating also makes it more viable in Khitai and other zones like Dragon's Spine. Critical rating and Critical damage rating are pretty much matched. Hunter rounds up it's stats with some -hate rating and some protection. Overall Hunter looks like a viable alternative while not challenging Blade at what it's best at: damage and survivability.
Suggestion: I slight downgrade in Hunter's critical rating (down to 50) and critical damage rating (down to 65) while bumping up hit rating to +30 somethings. Hunter is too close in terms of crits to Blades while Hit rating is waaay too low even for some Khitai dungeons making the armor user too prone to misses and evades on Bosses.

Gloves of Blood Hunter vs Darkblades of the secret doors: Items are matched on armor and Darkblade has more critigation (it's not all that important stat for Assassin anyway).  Darkblades with it's CR of 251 falls short of Hunter's 335. The rest fall into Hunters favor: more critical rating, hit rating, offhand rating and -hate.It's a good trade off for Darkblade's 113 protection and 32 Constitution while Blood Hunter brings only 65 protection to the table. Hunter seems like a good alternative while not surpassing Darkblade at what it does best which is giving out loads of protection.
Suggestions: it's fine

Facemask of Blood Hunter vs Hood of the Usurper: both items are matched on armor and critigation. Usurper opens up with slightly more constitution followed by stamina stat which is pretty much useless in 4.0 reality. Hunter tops the Usurper with 521 CR over 439.  Usurper has a bit more hit rating, but a bit less cirtical rating. When it comes to those item's applications in group PVE Usurper gets the number 1 spot with more than double Hate Decrease Rating. The protection stat on Hunter doesn't really shines all that much.
Suggestions: Hunter is an interesting item when compared to Usurper. I think its fine for what it is trying to be good at which is a group PVE item with balanced stats. Usurper is more specialized gear.
I would strongly advise to change the model for assassin head gear. For years now the game doesn't offer any real "assassiny" head gear and by that I mean: ninja mask, hoods, hoods with masks, face bandanas etc. This is another obscure head gear that doesn't fit assassin theme at all. Assassin armor needs to look like it is made for assassin and not some kind of shaman or other weirdo.  You can re-use Bossonian Prowler mask for this as it would fit the design of this re-used and re-painted model.