Age of Conan is my teh hardcorez MMO, World of Warcraft is my guilty pleasure 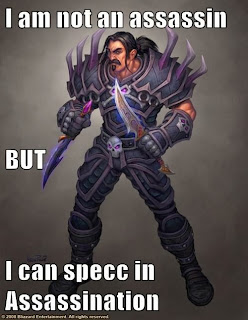 It is no secret that I am less than pleased with my current Age of Conan content. Quite honestly I can either do T4 raids (which are fun) once a week or do pointless daily minigames (in which I get verbally abused increasingly often). Since a "try Mists of Pandaria for free" e-mail landed in my inbox I have decided to take ol' WoW for a spin after *gasp* 5 years break. I have to admit that I still keep tabs on WoW via The Instance podcast which is my all time favorite and it made me want to try WoW again more than once.
Of course once you actually log into WoW you will be hit with cheesy graphic, gnomes riding motocycles and naked Night Elves dancing the night away on the post box in Goldshire. I could have easly alt+F4 the game at that point and go back to my teh hardcorez MMO, but I knew all too well that AOC has nothing to offer and most likely I will just sit my ass in Kara Korum and wait for minigame window to pop. I have decided to "go with the flow" and just accept whatever I will be served without juding it too much. Think of it like going to weird-ass asian restaurant and getting some absurd dish like snake's penis.Fine, so there are gnomes, whatever. Since I had only lowbies toons (like 20 lvl warlock) I went to total option zero and just rolled...you guessed it, A ROGUE. It took me a while to get used to the non-combo based system, but as I checked the possible builds it seemed like WoW has a very complex system of cross-skill synergies that can be mixed and matched for different results. I have to admit that quiting in Vanilla WoW (that is right kids, pre BC!) I am amazed how at every turn WoW just shouts at me: "hey dude! Remember this shit that used to piss you off? We fixed it!". Literally every single thing is different and in my opinion: BETTER. Of course this could be "new & shiny" factor, but WoW just wants to be so damn convenient. I remember how I used to get upset how it takes forever to get a group together for decent dungeon run and that issue is gone with dungeon finder (it puts DPS, healer and a tank in a group and then ports it into the dungeon). Comparing that to AOC is pointless as AOC is still knee deep in 2008 reality of "LFM need tank and healer".
I feel like I shouldn't compare those games at all. World of Warcraft has virtually unlimited resources that they can spend on whatever they desire. Flex Raiding? Sure. On the other hand Age of Conan takes 3 years to develop crafting system and even such a minor change as pvp weapon adjustment  is a challenge of a titanic proportions.
What I am interested in is PVP. WoW seems like it picked up the slack and not only it packs essential content like arenas and battle grounds, but also a very innovative concept of "PVP armor and weapons are best gear for PVP". Again, I hate to compare, but in yesterday's minigame I was actually THE ONLY PLAYER without PVE weapon - be it crafted T3 or T4. I am not saying that WoW is the greatest thing since sliced bread, but I will be damned if I won't admit that it is just rock solid MMO with a lot to offer.
What will become of my recent dabble with WoW? Probably nothing as I am way too invested in AOC to "give up" that easily (trust me, if I could I would have done it years ago), but I would be lieing if I said that I won't be logging on here and there and paying close attention to what the future holds for Azeroth (with the next expansion right around the corner). Why not? It's not like I am missing out on anything significant in AOC. Oh, new unchained dungeons are coming?

You'ar right.
I resub WoW from time to time and it is so nice and relax to play. Just click, click and you are in dungeon, battlegrounds, raid finder, scenario, whatever.
On which server you are in WoW?

Of course, since you started AoC on server Aquilonia.
I have toon of Argent Dawn RP EU. And i can admit, there is one of the best RP community.

I miss RP in AOC badly :[ Never been a big RPer myself but I rather liked the vibe of people RPing on the streets of Khemi. Good times.

There's a lot of RP in fury currently. Just log in, and pay attention to global. A neverending wave of insults usually pop into your eyes. Isnt that roleplay? Wow is a billion years ahead AOC just in management. Blizzard cares and take seriously its game. Listen to the players. Aoc has a lot to learn from wow.

WoW has another problem instead. PVP gear for PVE. In raids, instances and everything PVE related pvp gear is almost equal is stats. A good example is Arena season 9(patch 4.1) When my rogue had full arena gear. I checked out the loosers (pve players :P) gear and noticed that the only difference in our gear was the hit rating/exptertice rating which is a must to peform good dps. When i was about to do something that had to do with pve i just had to drink a potion that gave me enough hit to do the same dps as any full t11 geared.

I played WoW for a little while over the summer, and noticed a new problem with the gear. They use aoc's idea with "a little pve dps, but full pvp dps. when pvp cr wont benefit in pve). The problem was that thier "pvp power" and resilliance made them the gods of pvp, even if i had full epic gear and they had a few blue pvp pieces. me and 2 friends attacked a druid in pvp gear once, we had full epic and he had blue pvp gear. to our supprise he one-shotted us while we did about 10% to his hp. we later checked him out on the armory and saw that he'd take 58% less damage from us, but he'd do 61% more damage. this was later changed, back to the old system where pve items were sometimes better than pve.

And to you on Argent dawn EU, add me! My name is Tamarian (inspired name from the TT leader) :P