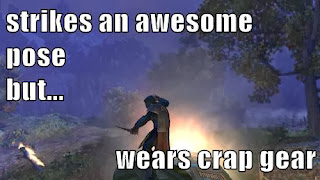 Funcom is currently preparing so called "loot extensions" which is new loot granted as a box (it gives a chance of epic loot) via mastery quest. In order to complete the quest you need to do the following dungeons:

So might call this "cheap" shot at making people do less than popular dungeons, but others welcome it as a new chance at pretty rad loot.

For the Temple of Erlik the new loot will be added to the existing loot tables of the 3 bosses there.

Since Funcom devs asked for feedback (as they did with unchained loot) here are my few words on proposed assassin loot: 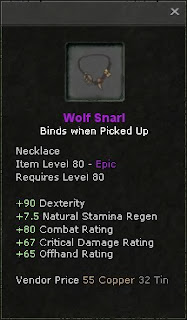 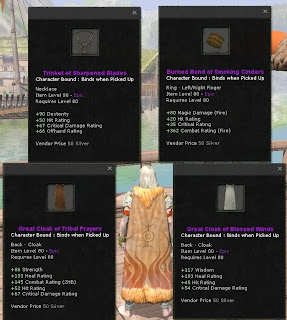 Trinket of Sharpned Blades vs Wolf Snarl: hands down new Trinket neck is an obvious downgrade for Wolf Snarl which is  T'ian'an District - Time Trial loot. It trades 80 CR and Stamina regen for 50 hit rating and +1 offhand rating. Hit rating might just be the most undesired stat of them all as every piece of Khitai/SDS loot is loaded with it and everyone is using general perk that also gives +hit rating. The trinket needs something that will make it stand out of the rest so since you already shaved off the CR perhaps buff up the Offhand Ratting to 80 to make this Trinket all about offhand damage. Either way it needs to be different from Wolf Snar and not a downgrade in terms of damage without giving utility that goes beyond hated hit rating. 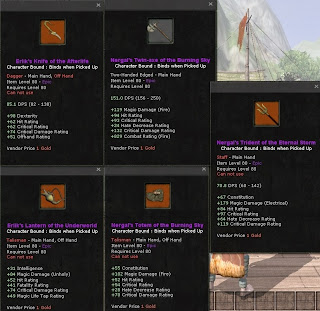 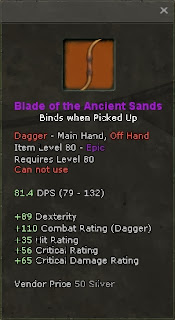 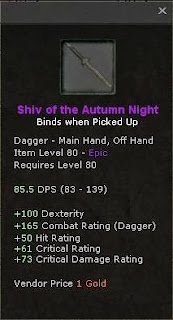 Erlik Knife of the Afterlife vs Shiv of the Autum Night vs Blade of the Ancient Sands: While Erlik is absurdly close to the Shiv it totally destroys current T3,5 dagger. It seems like, by design, planned loot extensions are, in fact, a loot replacement, by making old drops obsolete. If that is intended then Erlik vs Shiv is pretty ok. I would drop Erlik 1 DPS point more just to make Shiv stand out as most desirable PV(P)E weapon.

I think you will quickly run out of stats configurations on loot if you don't introduce some kind of added benefits like weapons procs (items used to have a lot of procs back in 1.4). It is a great way to customize the gear further without adding too much power.

Also you might want to consider adding spell/armor penetration to the weapons.
Posted by Slith at 9:21 AM