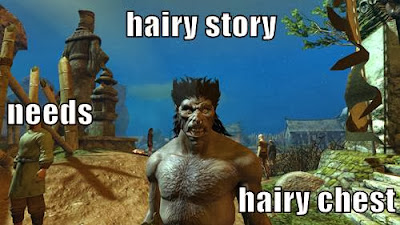 I think that my Halloween event review is long overdue and, looking back at previous years, I am writing it rather gladly this time. New Game Director communicated to ...uh...community that his take on yearly events is to re-do them, but always to add something new. This is "building up" philosophy and it is smart.
After years upon years of complains about "Night of the Lost Souls" this year I skipped it all together and went for new content. So the story revolves pretty much around a tribe that moves into the Conarch and ...well long story shorty  your immortality makes you a perfect candidate for a  new member of the Werewolf pack. The whole story takes place in special instance of Conarch city hub and in Fields of the Dead.
There are several things to cover here so bear with me:

The story
It was cheesy, but it was a good cheese. Silver Antrum still has best writing so far, but this even places as second best easily. I don't want to spoil anything so I won't be talking about the plot, but I think we all know where it is going: you won. I have to give a honorable mention to the devs and writer who had enough of forethought to foresee that SOME players will want to stay infected with Werewolf curse. Me? I choose all the dialogs that said "fuck it, I am staying cursed with Werewolf paws" just to see what would happen. To my amusement the NPCs would always come up with some half-assed explanation why I couldn't become werewolf or why I shouldn't or how even if I remained werewolf it would suck for me big time (I am not making this up, at one point I was technically a werewolf but I couldn't transform and I would lose my powers slowly *roll eyes*). Lets just say that the story wasn't really all that great. Granted, it is a Halloween event and Halloween is hardly serious stuff, but still...its a good cheese but just a  cheese. 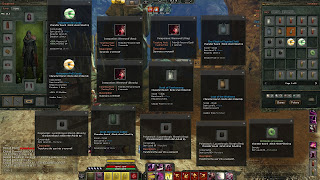 The rewards
I think those were great and .... half-assed at the same time (imagine reaching that balance of good and bad :X). There were great because you could re-do the quests (which is GREAT on its own) and try to get different items out of loot box. There were Halloween candy (giving buffs with loads of PVP and PVE exp, good stuff) and social cloaks. Sounds good eh? Well the cloaks looked only good in your inventory because the second you putted them on you were STRUCK with poor texture quality (more or less your character was wearing plastic bag on his back) and HORRENDOUS clipping issues. To give credit where credit is due I have to mention that you can sell those clacks for 50s each which is pretty good coin for fast 2 quests. There were also some pet drops (mini werewolfs) and stuff that transformed you into werewolf for 30 m (to confuse people in minigames about which class you are :P). 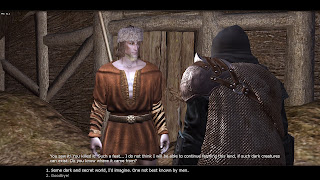 The technology
I have always found werewolves in AOC goofy looking (those models are surprisingly bad) and it really killed the mood for me to participate in event based on those creatures. I like the clever re-use of Conarch as a special instance, but it think it is high time to move away from Cimmeria when in comes to events. We have had enough Cimmerian events as it is. Interestingly there was one Easter-egg quest when you need to kill creature from "Dark and Secret World". The Devs pretty much "ported" one of the monsters form Secret World to AOC to test the technology. Apparently it worked pretty well so TSW and AOC can share more resources in the future (it doesn't mean same monsters in both games, but using certain parts of already existing models etc.). I was also pretty surprised by one quest that required me to kill 30 creatures or remain werewolf for *gasp* FOREVER. I got +20% damage in werewolf form so why would I ever wanted to finish that quest? The devs planned for this and this quest updated even if you killed players and not NPCs. Nice. So Funcom can give us pvp quest, but just chooses not to.

So to sum it up I have to say that it was refreshing to see new event and I am looking forward to the Halloween additions in the future.