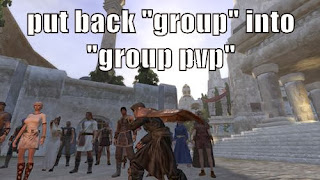 Quite honestly I have been doing a lot less AOC as of late because I pretty much do T4/Cloud runs and few minigames here and there.The reasons for that are lack of progression and pretty absurd removal of group pvp option. It affected mine (and others) enjoyment of the game in a major way as I can pin point exactly when it was the last time I had amazing pvp experience  - before minigame changes.

Seeing how Nusquam (Joel Bylos) was very active on the forums and how CirithGorgor was making good on his promise of "more dev posts" I have decided to go for it and let both of those gentlemen know what was on my mind in terms of pvp.

Here is my prv msg via forums:

"Hello,
I am contacting you on behalf of AOC pvp community which I am feeling like I can be the voice of.
I am aware that pvp is not your cup of tea, but I would very much like you to take some time and at very least give us FC’s stance on this issue.
Here is the problem: PVP content in Age of Conan doesn’t allow you to play with your friends.
Open World pvp doesn’t have any goals, the progression via it is extremely slow (with dimishing returns on pvp xp) and it happens rarely even on last pvp server there is.
Shrines of Bori doesn’t really counts as pvp content since it is about mining materials and it is rarely used nowadays.
The last thing are minigames. Back few years ago previous GD removed the possibility to sign up with your group and made the teams totally random. This, more often than not, creates scenario when you actually spend time fighting AGAINST your guild mates and friends which is not fun in the long run.
There is a possibility to sign up for tournament mode minigames but it requires a lot of preparation as there is a need for two full teams to sign up at the same time. This just happens NEVER.
Randomness of minigames encourages jack ass behavior, going AFK, killing opponents and ignoring the pvp goals of a minigame (like getting flags). It is a very toxic, unfriendly environment that PVPers put up with when they are leveling up (treating it as necessary evil). Once people hit the pvp lvl 10 they lose chance at progression and without any social aspect of the minigames (aka playing with friends) they lose interest in pvp altogether.
Currently on Fury PVP there is no PVP only guild (pre-change there used to be tones of those).
Here are 3 posts that sum up this issue:
http://aochideout.blogspot.com/2011/02/age-of-conan-pvp-fail-by-design.html
http://aochideout.blogspot.com/2012/11/4000000-served.html
http://aochideout.blogspot.com/2013/02/borderkingdom-asshattery.html
The pvp community has been begging for an answer about this: do you plan to bring back “group” to “group pvp” in any shape or form?
Please take your time to explore this issue as even simple post on this matter would mean a lot to the pvp community.
All the best,
Slith"

I have send this to both Nusquam and CirithGorgor and the latter was first to respond.

Now, I know you would very much like to read exactly what the devs have written, but alas I cannot post that since I didn't get permission to share those informations, in fact I did't get a reply about my request so I will assume that I can't share it word for word. If I will get Nusquam and CirithGorgor stance on this I will re-post complete letter.

But of course I would be a jack ass to post pretty much "I know something that you don't" so I will give you few hints about the direction that AOC pvp might be going.

First of all for me personally the biggest issue was thinking that the dev team is ignorant of the fact that group pvp option is screwed in AOC. Quite the contrary: Nusquam picked up on the issue while reading the forum (and he really does that) and he even quoted few posts to the rest of the team to show them where the problem is at. Here is a big surprise: the AOC team is not all knowing. Some of the post ROGS changes that were made, while somewhat obvious to the veteran players, are not painfully evident to the team that is currently shared between three Funcom MMOs. Removal of group option (and "replacing" it with tournament-o-fail) was puzzling to the team and they were not entirely sure why did it happen. They figured that it was for balancing reasons and here is a quote that I think I can post:

"Essentially it sounds like it was a balance call (nobody wants to force noobs to play the best PvP players), but the problem is that balance isn't always fun" - Nusquam

Indeed it isn't, assuming of course that current random vs random minis are somewhat balanced.

I have exchanged few back and forth prv msgs and the topics we have covered boil down to:

1/ there is a need for social element to be brought back to the game (teaming up for pvp)
2/ people are ignoring minigame's objectives (why that does happen, and they can be encouraged to do otherwise)
3/ lack of pvp progression after hitting pvp lvl 10
4/ gear gap between T4 and pvp T3
5/ issues with future PVE gear affecting PVP

And here is how our little chat ended:

"In short - the discussion about this has already begun. I'm reluctant to pull the systems guys away from Tradeskills to this yet - I *really* want that out of the door". - Nusquam

Of course who would say "No" to the crafting and it's been on FC plate for so long that it makes total sense for it to be FC #1 priority. But now we know that some of the biggest problems in PVP are getting a look at:

"so I have passed on some suggestions in regards to looking at PvP and hopefully we can add at least something interesting and social for the PvP base after the next major patch (which will be very soon)" - CirithGorgor.

Like I said I cannot share the exacly what the solutions will be, but I can quite honestly say I am wet with anticipation (also urine) for those. Do you trust my judgement?

First of all, it's good to learn that FC hasn't given up on the game yet and thank you for your efforts in trying to bring across the wishes of the player community. As a casual Pvp'er on Crom, however, I am less than ecstatic about bringing back the group sign-ups to PvP, as I fear that it might drive casual Pvp'ers away. In Secret World, group sign-ups are possible and those pre-made groups just steam-roll the pug groups from the other two factions, even though class balance is a lot better in that game than in AoC. In the end those matches are frustrating for the pugs, and boring while still rewarding for the premades. So I am afraid that she same will happen in AoC and I'm already dreading global announcements such as "pvp group 5/6 LF necro T4 gear/exp required or KICK". In the end, even more one-sided matches than today or driving all new Pvp'ers away should not be in the interest of the Pvp community as a whole. So, IF they bring back the group sign-ups, they ought to take other means such as separate sign-ups for Pvp level ranges 1-5 and 6-10 or one for premade groups and one for pugs (an improved version of current tournament system) to prevent this from happening. Just my 2 cents.

First of all it's good to know that there are still some development efforts going into AoC. And thank you for your efforts in trying to bring across the wishes of the community to the developers. As a casual PvP'er on Crom, however, I am far from happy about the aspect of mixing premade groups and puggers into one minigame. Group sign-ups are possible in Secret World, and needless to say that the premade groups usually steam-roll the pug groups from the other two factions. This is extremely frustrating for the pug groups and boring - while still rewarding - for the premade groups. In AoC this would make the matches even more one-sided than they are anyway. One solution might be separate sign-up queues for premade groups (although more flexible than current tournament system) or separate queues for ppv levels 1-5 and 6-10. Otherwise, there won't be any casual Pvp'ers anymore and thus, in the end, no new recruits for becoming dedicated Pvp'ers. And I'm already dreading global posts such as "PVP group 5/6 LF necro with T4 gear/exp else kick!"...