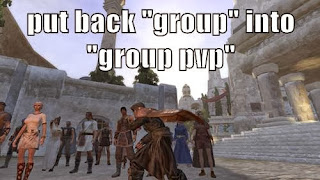 I should have waited before posting part 1 so Nusquam could replied to my request for posting the pvp news/plans/raw draft. Instead I went for half-baked post, but forgive me, I was just being excited.

Anyway here are the exact pvp thingies I have asked the devs :

PvP T4 gear
It is planned as next tier that is necessary in order to close gap between PvP T3 and T4. This might also be the last pvp gear update as in the future FC feels strong about making PVE gear not matter so much in PvP.

Worst case scenario I think I can probably get the PvP rank 4 gear out by myself and that should at least address some of the issues T4 raid gear has introduced even if can't help as much as I would like it to with social aspects. (P.S if and when T5 raid gear is introduced I want to make it major priority that this does not effect PvP in such a major way). - CirithGorgor

I personally have nothing against next PvP tier as it won't change anything in the current "balance" of things. The fact remains that a large portion of PvP population is already swinging vastly superior PVE weapons (be it crafted T3 or T4 entity/cloud) and T4 PVE gear is widespread. If anything PvP T4 gear will actually give PVPers a chance to catch up in the "arms race" without resorting to raiding T4/farming cloud.
What about those that have recently joined PVP? Wouldn't new pvp armor only widen the gap between them and veterans? Granted, it will, but overwhelming presence of T4 gear invalidates that argument. Saying that pvp T4 armor will affect noobies is taking a blind eye to T4. Furthermore T4 gear is not for everyone: it takes large guild of dedicated, well organised raiders to aquire it. PvP gear? Well, it takes PVP to get it. I rather have people having chance at new PvP tier than a false promise of "balance".
My personal stance on this is I want new pvp tier as it would give me new pvp goal to aim for.

Tournament mode
This is best part: new T4 pvp gear will be, most likely, tied exclusively to tournament mode minigames.
While it doesn't exactly show up in the quotes the idea behind "trival changes to tournament mode" is actually changing the sign up system so you can queue up with 2,4,5 or whatever amount of friends and the minigame will go off (right now tournament mode needs exacly two teams of 6 to sign up or it won't start).

We hope to have a solution soon. In the short term it might be as simple as providing tokens for tournament mode and offering a new reward structure (perhaps the only way to acquire the next tier of PvP gear) but we will need to run through the options in depth.But of course, there are larger problems with the minigames. People ignoring the rulesets completely to farm spawn points e.t.c - Nusquam

The major sticking point is that all changes relating to tournament mode, however trivial they might seem, do require codework and being honest this is very tight at moment -  CirithGorgor

So in short tournament mode will work like old queue system: sign up alone, with 2 friends or with bloody premade. The rewards will be different and it will be the only way to get new tier of armor.
There might be some concers about "spliting" the PVP population into 2 separate minigames (randoms and tournament). I personally think it can't hurt: the current pvp population is far from growing or even being stable (people are fed up with zero pvp changes) so if anything new tournament mode can bring back some people/encourage more players to get back into PVP. With tournament mode being the only way to progress further in pvp there is a good chance that random queue will have less veterans signing up and thus things will get easier for low pvp level players to actually play this damn game. Also: ability to AGAIN play with friends? I would be happy to do just that.

So there you have it, these are the ideas that sum up as: changes to the tournament mode, new pvp tier armor that can be acquired only in tournament mode and next tier PVE gear - if it comes at all - will get nerf bat in PVP.

And last but not least: I don't get any exclusive, secret development info. I have merely politely asked the devs via forum prv msg and they have responded. Anyone can do that if they are willing to go beyond "fix pvp lol".
Posted by Slith at 12:57 AM