The Secret Hyboria - need for new direction in writing 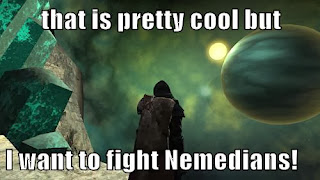 If I had to point to the very thing that keeps me in in AOC I would say it is the Hyborian setting, true to REH's writing and painted with magnificent visuals and music.
However I am starting to notice a very disturbing trend: over-Lovecraftian story and gradual loss of low-fantasy setting.
Over-Lovecraftian story? The hell is that? Well its no secret that some of REH's works were influenced by his friend's creations - H.P.Lovecraft. While Conan stories DO have some supernatural elements in them (pretty much ALL of them) it is very easy to see where Conan just beats down some smelly ape in true "heroic fantasy" fashion ("Rogues in the House") and when the weird and unexplained takes over and Conan is just witnessing it ("Scarlet Citadel", "Elephant Tower"). AOC took that "weird and unexplained" route and jumped on Lovecraftinan wagon (confirmed in this interview). That is fine and I love me some Lovecraft, BUT here is my beef: Conan stories had super natural elements but those were NOT solely based on said super natural element. It was about large military conflict, epic quest or titanic struggle against overwhelming odds.

I simply love Tortage, Conall Valley, Wild Lands, Noble and Common district because those zones tell gritty stories about grim reality of every day life in Hyboria. I adore the storytelling behind pushing back Vanir raiders, beating off Nemedian invasion or simply cutting down on dreaded Picts population.

I find that to be the very essence of Hyboria and it is all old world stuff in AOC.

Khitai? I think it had very nice balance of main story line (crater and the entity) and the struggles of the factions.

House of Crom was simply done right. It was a proper place for such Lovecraftian story telling (and the 6-man dungeon's final boss "the Prince" is the very essence of Lovecraft) and it was served with a moderation.

The Savage Coast of Ardashir: apart from BIG mistake of making the zone itself lvl50 this was a nice comeback to the classic, pulpy Conan with pirates and kozaki and Turan's military trying to make sense of it all.

Secrets of the Dragon Spine? It just feels and plays like The Secret World. Literally you can't take a dump without uncovering some ancient and terrible secret. Secret this and secret that and Indiana Jones style archaeological dig site and oh-not-so-well-done lizard people (no idea why FC chosen NOT to follow DarkHorse conics's design on this, it was perfect!). It all creates a package that I wish to quickly forget about it. SDS flopped, BIG TIME and probably the only good thing that came out of it is music.
Overly Lovecraftian writing was coupled with lack of content (the SDS zone itself is a joke, 3h joke in fact) and needlessly long dungeons.

SDS updates stretched out for a whole year like a bad car trip on a long Sunday and I feel like a kid sitting in the backseat moaning: ARE WE THERE YET?

So are we? I bloody hope so as I can hardly stomach any more Dragons Spine updates. Of course I can hardly blame Joel Bylos for this as he had to finish up what was started.

I want to see fresh take on Hyboria and I want to see kingdoms of the west. I want to see Aquilonia and Nemedia going at it again, I want see test the chivalry of Zingara, I want to stalk the streets of Shadizar in Zamora and rain fire on the damn Picts arm to arm with the legendary Bossonian archers.

I want AOC to be again about "sharp sword and straight patch to the enemy", that and "tits and ass" (as envisioned by Gatue Godager). No more lizards, no more sand getting into my pants, and no more sweaty workers uncovering secrets. Leave secrets alone, damn it!
Posted by Slith at 1:04 AM

That was the original plan and I think the current team intends to finish that off before pushing out any other stuff of their own. So that is when we will most likely be done with Dragon Spine.

Personally I'm not a big fan of the whole dragon spine either (nor Khitai) and like the lore in the old world better. There are some nice questlines there however(some leading into Coils or solo-quests like the one with the epic bone flute).

From a PvE aspect I love Dragon Spine. The 2nd boss in Wyrm is very nice and the last 2 encounters in Coils are still my all-time favorite 6man encounters. Unlike Demigod they are very complex and feel extremely well designed. More of that please!
I suppose you as a PvPer would be less exited about that tho.

I have some feint recollection about reading a interview with a Funcom employee (Bylos?) that mentioned they would do something with the next Conan movie if they had time like Turan. That would be my best guess for a new map.

oh man, I hate SDS so much that I pushed out of my head the third instance and the raid.

I guess we are stuck in this shit-sand-storm for good.

Really close to my point of view.
I would add that I think the lore about Khitai is perfect, I just think it was great from start to finish (and it took me time to finally get to the entity).

Totally strange if you compare to old world, but it was so nicely done. I really cared about the story behind it, not like when I played Guild Wars 2 and didn't gave a fuck about anything even if I tryed, really...

I want more of old world style, Khitai was great, but I'd like it to be an awesome one-shot.