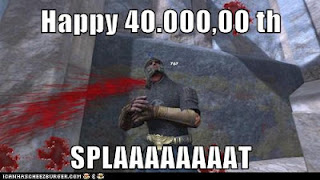 Another milestone for my character has been reached: 40.000,00 pvp kills. It's a decent number however I have seen some assassins boasting few more back in the days when yg.com reported on kills (those were the days...). It took me 4 years to reach this number so it is on average 10.000,00 yearly kills. So how was the "killing business"  back then and how it is right now? I have decided to dedicate this post to my personal ponderings about the state of pvp in Age of Conan.
It is lonely as hell in here...

I still cannot understand the decision to the remove the premade groups from the pvp que in order to make it "noobie" friendly. It does nothing (just like goggles on a cat). The majority of pvp games are still played the old school way: one side has crushing advantage over the other and the whole thing ends up in bloody mess. The only difference is that GOOD games are very rare now days. What do I mean by good games? Competitve matches between two well balanced, well coordinated groups. I had those games back in the premade days when my team was matched against other premade, or better yet: other guild. This was fun on so many levels: the social aspect, the competitiveness and the tactical coordination between group members.

It is very rare to have a struggle between two groups. Needless to say the randomness of the groups and the perceived anonymity of the Internet encourages jackass behavior. The very second anything goes wrong in the game people are ranting about how "everyone sucks" and "fuck you's" are exchanged freely. I NEVER had this problem with premades: we fought together and either claimed victory or suffered the defeat. We have shared happy moments and bitter taste of the lose, but I was never verbally abused by a team mate. Now days it is a common and my /ignore list is quite long.

Some will say: but Slith, premades are still possible, why don't you go do that? And I will say: it is a cumbersome system that makes you work hard for exactly same rewards as regular games. I like the minigames because it is a easy, convenient system. I don't want to spend 30 minutes putting together a group and then finding other group that have spent same time preparing. It's just bad and that is why no one is using it. Oh believe me: I  CHECK the premade tab on daily basis just to make sure whether there is a group that is waiting for a challenge and there is never a one. And for a good reason I might add: if there is a system put into game and that system is not used then who's fault is that? Players or the Devs? I would say the Devs have created content that is utter most repulsive to the players. Players, not matter how many people post how they "enjoy pvp for the sake of pvp" generally want a carrot on the stick to keep playing. If there is no reward for more time consuming content (putting together premades) then people simply won't be using it.  Make it good and we will come.

But I can manage that. The real problem is this:

A nasty side effect of premades removal is a total isolation of pvper in terms of social interaction. Back in the days of premades I knew tons of people that I was grouping with on a regular basis for PVP. Now days I hardly know people in my guild and the only AOC friends that I interact with are people on twitter/facebook and members of Assassin's Hideout community. This is simply mind blowing considering that I am playing an MMO and that, as my blog/twitter/facebook/forum indicates, I am a very sociable fellow. I want to befriend people in the game, but I simply don't have opportunity to do so as PVPer. I do a PVE grouping from time to time, but those are few and far between. PVP is my bread and butter and there is simply no venue for social interaction withing current PVP content (unless you are considering strangers calling you names a "desirable social scenario"). This isolation of PVPers have lead to many of them leaving the game which only reduced the pool of people that I interact with inside AOC. THIS is my main woe when it comes to current state of the game: I don't get to be social in the context that I want. Yes, I can socialize while doing raids/dungeons but I don't want to do that content. Yes, I can do PVP content which I love, but at the same time I don't get to socialize at all. I miss the days of crazy ventrillo talks between minigames when me and my team mates we were talking over previous games and planing the next one. This aspect of game was taken from me and I miss is dearly.