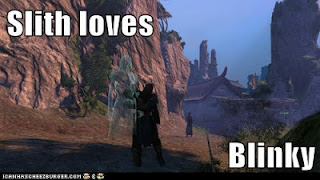 Critical Rating and Critical Damage Rating (along with Critigation and Tenacity) will get it's own post soon enough. Today I want to talk a bit about how to maximize your damage output as assassin in solo PVE and open world PVP via pets.
If you get proper gear (like Brittle Blade and Hyrkanian daggers) along with proper feats (Corrupting Strikes) and perks (Pressing Strikes) and top it off with Acute Striking potion and a combat pet then you can get around 44% bonus damage to your critical strikes. That is pretty scary when you consider that assassin can get +25% critical strike chance pretty easily. It translates to shit ton of damage.

Gear can be farmed and Acute Striking potions are common drop in all solo instances.

What about combat pets?

You have pretty much two options: Kappa or Furious Spirit. 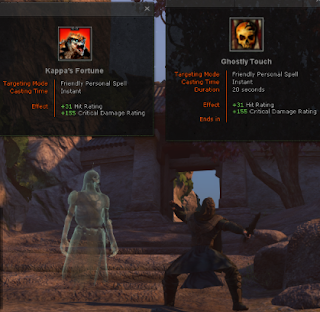 Kappa
The most important thing about this pet is how easy it is to get. Most people got it for free with ROGS expansion, or bought it via in game shop (there is no way to get this pet from pure game play). The Kappa pet will give it's user one of the three random buffs. One of those buffs is the red one (Kappa's Fortune) with +155 critical damage rating and +31 Hit rating. The biggest advantage of Kappa is that it's buffs are permanent and instant which means that as long as the Kappa is up you will always benefit from it's buff. The problem is that the buffs are random and to cycle between them (to get the one you want) you have to
re-summon the pet. This is super inconvenient. While using Kappa I find myself annoyed trying to finally get the red buff (some times it is first time around and some times it takes 4-6 recasts). When I finally get the red  I feel discouraged from using any other Khitai pet (like one of the Lotus pets), because I am dreading re-summoning Kappa again and getting the right buff. Also using Khitai pet instantly removes Kappa's buff and unsummons Kappa. Kappa is looking OK, but it is super common.

Furious Spirit
This pet, on the other hand, is very hard to get. In order to get it you need to get 3 skulls which are generic loot from House of Crom dungeon. I have only seen the skulls dropping from 5 bosses in HOC (the duelist, the mage, the trapper and so on) and still it is a very rare drop. I might have been very unlucky but it took me and my group about 5-7 attempts on each boss to get 3 skulls (so around 25 boss kills). Those bosses are on 60 minute cool down so don't expect to get all 3 skulls the very first time you go to HOC. After you got your skulls all you need to do is sacrifice them on pillar in the middle of HOC threshold and kill the Cross Roads King boss (the fight, compared to other threshold encounters, is decently challenging). The King will drop the pet that you can then learn and summon - provided you win the roll :X
Furious Spirit is fundamentally different from Kappa. The Spirit only gives one buff which is same as Kappa's +155 critical damage rating and +31 Hit rating. The buff is not instant but rather it is a proc based on Spirit's attacks and it lasts 20 seconds. Yes, the Furious Spirit is a combat pet in true sense because it does 7-31 slashing damage (comparable to other pets like wolf, tiger or bird). The proc is pretty common and yet unreliable: some times it will proc every fight and some times it will be every other fight. I find the buff procing enough, but in that regard Kappa, with it's permanent buff, is superior. Spirit's biggest advantage comes from buff lasting 20s: yes, you can stack it with things like Gray Lotus pet for absurdly high damage gain. Using the Khitai pet will unsummon the Spirit, but it's 20 second buff won't be removed. The other thing worth mentioning is the ease of use: you can cast your pet and always get same buff that you want. Because of this I am using my Khitai pets much more often now.
The Furious Spirit also looks wicked cool (a ghost with a sword in a worn out armor) and honestly would fit Dark Templar or Necromancer more than Assassin. Beats Kappa.

There you have it: use either Kappa or Furious Spirit, it will really add an edge to your damage.
Posted by Slith at 4:46 AM

How much dps does 155 critical damage rating actually add?

it depends on a lot of factors. Critical damage rating adds to your Bonus crit damage. Your crit damage is based on your weapon damage. So the better gear you have the more often you will crit and the bigger the crits will be. A lot of crits = a lot of bonus damage.

When looking at my damage, I go to general combat and the combinations that give the highest number is what I use. Currently I use a t3 dagger and t2 dagger. I have one hykerian dagger, one of the daggers from amp unchained. When I combine them all in different ways it seems to give me lower dps. I also have dagger of envy's fury. I guess my question is am I right in determining my dps? Or should I use another combination of daggers for higher dps?

Here is the guide: http://aochideout.blogspot.com/2012/04/guides-picking-your-dagger.html

PVP/SOLO PVE daggers should be for burst damage, with highest "raw" dps stats as possible.