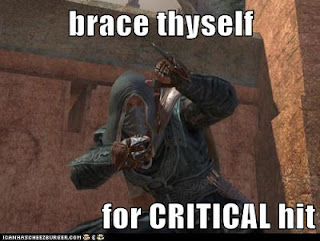 If anything assassin is defined by his burst damage and such is granted to him via critical hits. Of course what people call "critical hit" is a little bit more complicated and I will try in this post to show you what is going on when you see big numbers flying around your screen.

First of all you have to understand few key stats:

Critical Rating - your bread and butter. Critical rating simply gives you  a % chance to preform critical hit. Considering you have 0% Critical Damage Rating your "naked" critical hit will increase your damage by 50%.

Critical Damage Rating - it increases the damage of your critical hits.

Critigation Chance - the receiver of the critical hit has a percentage chance to do a critical mitigation(Critigation).

Critigation Amount - it the receiver of the critical hit rolls successfully on hit critigation chance then critigation amount decides on how much of incoming critical damage will be mitigated.

Tenacity - Tenacity counters your targets Critigation it the receiver of the critical hit rolls successfully on hit critigation chance.

With me so far?

Pretty much Critical Rating and Critical Damage Rating are what we could call "synergy" stats meaning they are best when stacked together.

Just having high Critical Damage Rating (bonus critical damage) won't do you whole much good if you have very low chance to do critical hit at all.

Also having absurdly good Critigation Chance isn't worth anything if you have marginal Critigation Amount .

Tenacity,on the other hand, is a completely different beast because it works ONLY in PVP.
There are two sources of tenacity: tier 2 and tier 3 PVP gear and assassin's golden perk called "Master Assassin". Stacking said PVP gear with master assassin perk gives 105% tenacity total which means that your critical damage cannot be mitigated...at all.

So what all that means for assassin class?

- Critical Rating is all around great stat and you should always try  get more of it.
- Critical Damage Rating only good if you already have high critical rating, otherwise it has very limited use.
- Critigation chance is only good if you have a lot of critigation. Assassin class should accept their critigation chance that comes from PVP gear and not try to actively pursue trying to make said chance higher,
- Critigation amount - assassin class can't get enough critigation gear and critigation chance to make anything, but minor impact on their survivability. Assassin is not a tank.
- Tenacity - works best when you already have great critical rating, critical damage rating and PVP T2-T3 gear with master assassin perk. In this optimal scenario you will take full advantage of your crits which won't be mitigated by your opponent. It takes significant time and effort investment to get those optimal conditions (gear + perk) but in the end it is worth it (you WILL see the differenece when fighting a tank class).

Now two pvp scenarios that will show those stats doing their thing:

Scenario #1:
"Assassin jumps poor questing Guardian who is wearing his Khitai gear. The assassin, being asshole he is, attacks from stealth and the hit crits adding 50% damage to already impressive numbers. Since the assassin is wearing critical damage rating gear his out of steal th attack gets even more boost adding damage on top of 50% increase coming from crit itself. But the Guardian, being the tank he is, is not defenseless. As soon as assassin launches is treacherous stealth attack Guardian rolls on his critigation chance and since he is in tank specc his roll is successfully and critigation amount kicks in to mitigate assassin's massive bonus damage. But this assassin have not came unprepared either: just as Guardian's Critigation Amount was about to mitigate part of assassin's critical damage the Master Assassin perk grants that sweet 105% tenacity (yes, that extra 5% is an overkill) and the critigation amount get bypassed. Assassin deals stealth damage + 50% damage + x% bonus critical damage"

Scenario #2:
"PvP lvl 2 Necromancer dressed like a clown, in his blue and green trader-trash items, is about to mount his horse. The sneaky assassin decides that nothing says "pro" more than running up to that Necro and using Death's Whirlwind. The Necromancer, blindsided by this unconventional attack, gets crited and since the assassin is wearing critical damage rating gear - the Death's Whirlwind gets even more boost adding damage on top of 50% increase coming from crit itself.
The critical damage and critical bonus damage goes through Necromancer like a hot knife through butter and, since he has not critigation gear, the critical damage and critical bonus damage are dealt in full. The assassin is using Master Assassin perk, but since the Necromancer has no Critigation gear the Tenacity has nothing to counter and has not effect on the outcome of the fight".

So as you can see Critical Ration and Critical Damage Rating will always help you in every fight, while Tenacity will only have an impact on those opponents that can actually have gear with critigation stats to counter your bonus critical damage.

- Do always get Critical Rating and Critical Damage Rating gear
- Get Master Assassin perk only when you already have at least Tier 2 pvp gear, otherwise settle for much better Sins of Flesh + other perk.