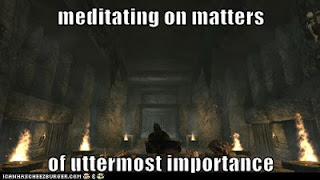 In this post I want to talk a bit about some skills and perks that are not exclusive for assassin class, but they are pretty much essential for successful pvping as assassin.

Dash - this skill is available to every class and it taps into your stamina supply in order to convert it for energy. How often should you use it? Every damn time! As of now stamina is almost meaningless resource and it will be super rare for you to be even close to being out of stamina in pvp.  Therefor your energy pool will always be more important than stamina. The best practice is to be watching your energy pool closely and use dash every time your pool is about half consumed. If you use dash too early some of the energy will be wasted. The idea is to keeping your character mobile and in order to do that you have to manage your energy in most efficient manner. Don't be afraid to use dash all the time. It is not a skill that should be used when you are out of energy, but rather one that is there for you so you will never run out of energy. That is the difference.

Rest - post energy revamp rest became ultra effective when it come to rapid (and I mean it: rapid) health and energy restoration. Rest is way more effective than whatever you can get from your average healer. I have rest bound along with my health pot and stamina pot so when I am using it also triggers my heath pot. Rest is the essential tool for assassin's style of play: run out of the fight, rest up, stealth and rejoin the fight. With rest it really pays to be doing the "hit & run" tactic. Just make sure that your are not moving when trying to use rest because otherwise it will go on the cool down. Also you can't have any dots going off and damaging you. Have it on your bar, use it often.

Hide - assassins are kings of stealth combat. Why? Because assassin will deal 1 x face stab damage with every stealth attack and still not have face stab miasma to go on cool down. Meaning? Meaning you can do the stealth attack and use face stab at the same time and that translate to instant 2 x face stab. If you are using unholy stabs (+15% critical chance) and necrosis (+15% damage) and are topping if off with +5% damage from passive perk then that can easly translate to some serious spike in your dmg out put. So not only you are destined to be taking advantage of stealth attack/face stab mix, but also stealthing around protects you from being targeted by opponents. Best part is that you can still use avatar/lotus overdose and liberation while stealthed and not have them break it. Meaning? Absurdly buffed 2 x face stab + stealth attack. It is a great tool and one that simply cannot be used too often.

Finely Honed and Tainted Weapons - this is how Ilaliya dev from Funcom explains their usage:

Quote:
Finely Honed works on mage shields, and the "barrier" spells in the priest AA trees (each priest class gets a barrier spell as a major perk).
Quote:
Tainted Weapons removes all "Green Heals" the "Blue Heals" and health potion effects, with a single use of Tainted Weapons on the target. These may be all recast immediately, assuming they are off cooldown / once they are off cooldown.

I have to say that some times I will switch Tainted Weapons for Avoid Entrapment (also pretty nice perk), but I am always going back to TW after a while. I am always using FH and TW at the same time for maximum effect. When fighting healers the usage is pretty obvious: wait for the heal to go off. When fighting other classes I like to use FH and TW early on to soften up the target. The key lies on consistent usage: use it well, use it often. I have those perks bound under alt +2 and alt +3 and smacking them during PVP is my second nature. So much so that I am using it in solo PVE (for no reason at all) and this mind set is some times problematic in group PVE when I will use FH & TW on the Boss but out of habit rather than when needed to (yeah, I caused some wipes because of that :X). 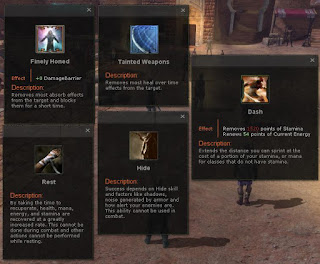 Tainted weapons seems just a little OP. "100%" heal debuff and removes absorbs and potion effects - 20s cooldown and instacast as well right? Name on other MMO with a 100% heal debuff on a 20s cooldown.