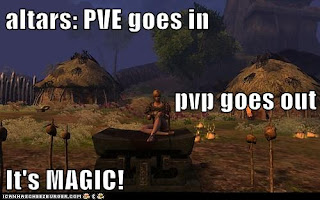 As you might have noticed that I am kind of cranky lately because of group pvp in Age of Conan. Seeing how I can either do eversomore minigames with randoms (but I am coming to conclusion I don't need that in my life) or nothing at all I have decided to call upon a friendly TOS and group up for some Bori pvp. And by that I mean that I have searched CE and it showed a group being there and since me and TOS didn't have anything else to do we have decided to go for it. First of all the new CE search mechanic (in case you don't know: you can search for players in CE only when being outside the play field) worked like a charm: we knew there were people in CE that needed killing and said people were ignorant of our presence until it was too late.
Both me and Koirein are pvp lvl 10, but since there was a full group in CE we have decided that it's ok.
Needless to say we have plowed the CE in few minutes destroying two altars and after brief carnage our opponents left the zone. Fun? Hardly. People do not farm Bori because they are good at pvp and they are not there to pvp, but rather to create optimal scenario in which they can get best pvp xp/tokens ratio for the time spent there. For them our presence was annoying as it made said "ideal scenario" impossible to pursue. The opportunity for pvp was highly undesirable. For us it also felt like half-assed content since Bori farmers provided little to no resistance and gave up pretty quickly. For me personally it also felt like I am being an asshole for making already boring and unattractive content even less bearable for those people. Is content for CE "gankers" about either making other people more miserable that they already are (if they hate Bori) or spoiling their fun (if for whatever reason they enjoy Bori) ? At very least people in minigames literally "sign up" for whatever they are getting. Ganking those people in CE somehow felt wrong .
Perhaps if pvp crafting is introduced then killing people in CE will actually have a valid reason other than just making people miserable.I will gladly revisit CE after the crafting revamp is in, but as it is now it is just weird.
Posted by Slith at 1:57 PM

give +10 000 pvp xp from kills from pvp at bori and there would be a fight all the time, but dont make fight more rewarding than farming friends because then farmers will farm each other than dig materials, and someone has to dig in hyboria, am I right?;)

Question: Have you ever been on the "Rage" server? I just resubbed after months (been playing since 2008 aswell) and I just found this idea of this server pretty interesting. Even Underhalls/White Sands are not shut down. What I have figured tho, is that the population is soooooooooo low! But the concept is so amazing.

Do you know anything about the real numbers of players on "Rage"?

They really should merge Fury and Rage and make it Rage only (imo).

nah, I haven't rolled a character on Rage because for many of us it was pretty obvious that the concept wouldn't work in the long run.

Rage is pretty empty now. Perhaps crafting revamp will breathe more life into it. I wouldn't invest my time on Rage as of now.

I have done bori on a few toons to get from lvl 1 to lvl 4 asap.

When attacked in CE I always ran.

Firstly because I was usually laden down with mats. Mats which if I didnt use in bori I could sell on the trader and make some good coin.

Secondly, because I am a realist. I know that my no-gear lvl 3 toon wont stand a chance against a fully geared lvl 10 anything.