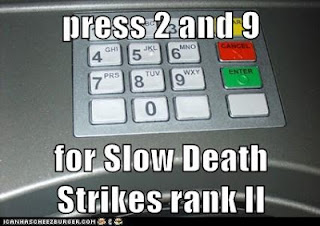 As I previously mentioned I have this strange "thingy" about MMOs where I can really focus my attention on one character without feeling some kind of stress that prevents me from enjoying the game. Call me weird. However few months ago I have rolled an "alt" named Comgall the Barbarian and have played him on and off from time to time. At first the plan was to experience all AOC story since I have rushed so much when leveling Slith back in 2008. It was great: awesome Tortage experience, followed by grim and interesting Conal's Valley and then super story-saturated Wild lands. All of this have left me hungry for more stories. I have managed to do Field of the Dead with relative interest and  about lvl 40-ish I have started to become more interested about feats and perks rather than the story. I am very much a min-maxer kind of player  so again I was obsessing about "best" specc, gear and combo rotations. Story, sadly, all of sudden was simply getting in my way of gaining more and more levels so I could unlock feats and experiment with b uildsAfter a while it became evident that I should use my offline levels to ding lvl 80 as I wasn't enjoying "playing" the game, but was rather hell bent on reaching 80 lvl asasp. So after dinging lvl 80 via offline levels (I still have like 250 of those :P) I have played around with few speccs, did few solo instances and minigames and pretty much threw my barbarian into a trash bin. Another problem manifested itself: playing assassin exclusively  for such a long time I am very used to certain pace and standards that were simply not meet with barbarian. Honestly playing barbarian very much felt like playing assassin in slow monition :P I was still not used to the class, but I had no desire to learn it. You see my asssassin key binds and routines are so ingrained in my brain that last week I have punched in the combination for SDS II on my bank's ATM cash machine :X That is intense. I simply cannot un-make those years spent developing and practicing assassin. More so it seems like I have been deluding myself that I can have an alt for the story alone. Couldn't have done it. And I REALLY like good story in general as I have read every 'lil bit of text in Khitai, Turan and Dragon's Spine quests. The lesson learned? I am doomed to play just one character. Period. Oh well, seems like the epic saga of Comgall the Barbarian has come to an end. Perhaps I am destined to NOT having an army of alts, but my MMO ADHD comes with certain perks that are granted via focused game play: I am missing only few mastery points from having ALL of my AAs unlocked. Sorry Comgall, your 2 stuns and 2 knock backs are simply not good enough to match it.
Posted by Slith at 4:27 PM

My first character back in 2008 was actually a Barbarian (TRUE STORY) I then changed to POM, halfway through 2008 as I ujsyally play Tank or Healer and not dps.

Eventually I ditched the barbarian, and actually dont have a rogue exept a ranger on rage or whatever that server is called.

Today I'm playing mostly tanks, I actually have 3 different guardians that I play at different levels, one at max level, one at T1-T2 and one at blue gear lvl. They all give me enjoyment, so what Is uggest is that you simply start a second assasin!!!!!!!!!

a second assassin? And what I would do with it? :D

The black myth of Stygia?

Yes, I will pass on that :P