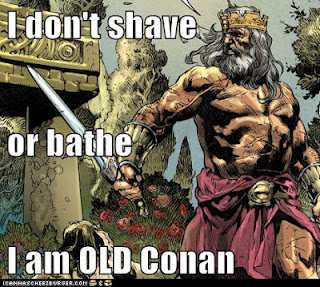 When it comes to my Conan media consumption up to this point I have been pretty damn old school. I mean I have a quite large collection of books and comics (some from 70'). Tons of paper. But recently I have heard the digital call of the new "Phoenix on the Sword" and have decided to answer it by buying the "paperless" version.

The price tag got me really sold on the idea in the first place: 5.99$ for a bundle of 4 comics is a steal. The price difference between digital and paper issue is simply staggering. The second thing is convenience: after few clicks the comic was ready for reading on my PC or mobile device like iPhone. Reading the comic on the computer was pleasurable and I didn't get any weird feeling indicating that I might be missing something that the print version would have provided. But enough of this digital sorcery talk let's get to the point. I like Dark Horse and have always enjoyed their producs. I still have yet to see a single boring Conan issue by DK (have read tons of those from Marvel). The art in DK's Conan is, as always, excellent so I won't even bother to compliment it here.
It's eye candy all the way. Now the story is, of course, REH's original with some very minor twists that are there only because it's needed to translate the book into comic form. For example Toth-Amon explains his slave status by merely touching the Baron and showing it to him via some wizzardly vision. As you might have guessed
3 panels of Toth-Amon merely monologuing about that doesn't make for a great comic. Apart from that I find interesting that the story in "Phoneix" is told to a scribe by an old Conan - now a ruler of Aquilonia for several decades.  As always the writers have used REH's writings in the most clever way. In one of the panels old Conan recites a poem that REH wrote for the first page of the book. The dialogs are lifted straight from the book which is more thatn welcomed. Overall this is a great comic and one that will please any Age of Conan fan. More so this issue has sold me on the idea of digital comics and I will, without doubt, purchase more of them in the near future. Long live The Dark Horse!
Posted by Slith at 12:54 PM