New Director for Age of Conan 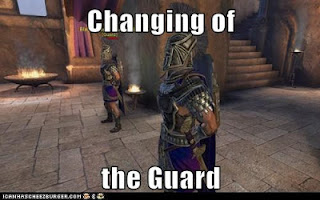 So the rumors turned out to be true and it seems like Joel is indeed "master of it all" now. While I am very optimistic about JB's capacity to push AOC into right direction simply I cannot help to look back at all those years of the reign of Crag Morrison.I don't want to turn this post into glowing with praise nor swarming with complains, but if I had to make one sentence statement about CM it would be this "Silirrion made a lot with very little". Is it all great? No. Did he make mistakes? Absolutely. But it was a bitter test that Sillirion had been given and after all those years I can only say: he's a pass (if there is indeed such an expression).

It seems like almost yesterday when Game Director Gaute Godager has resigned from Funcom. His last patch was 1.4.

Many will argue that 1.4 was the "golden era" of Age of Conan, but I would disagree as it had A LOT of game breaking issues. Cunnding deflection killing people? Storm crown on TOSes one-shotting people? Freaking BEASTY Bear Shammans? (ol' Galdah getting 50 kills per mini *roll eyes*). THE DAMNED GEM ERA? To top that off there were almost no systems present in the game (pointless, unrewarding minigames being one of them) and people were fight clubbing their way to pvp lvl 5 gear. BTW it is a common misconception that 1.4 wasn't all about gear as there were only two types of gear in the game meaningless stats on pve armors and pvp armor with massive advantage when it comes to resistance. I feel like I need to keep going here: chain CCs locking, combo skipping, animation issues on male/female, combo cooking, shield stacking, unlimited backwards tapping (no cooldown on the buff) and horrible, horrendous performance and stability issues with the game client. As a new Game Director you got that along with increasingly smaller funds, team and vicious community to tackle.

With all that I have say that Sill is leaving Age of Conan in the best shape it's ever been systems wise. Item/stats revamp, AA system, feats revamp (with more or less successful class revamps), combo skipping fixed, new CC system (immunities, casting times), stamina revamp, Khitai revamp, token system, MULTI-FREAKING-SPECCs, crafting revamp (which I am sure will be awesome, too bad CM won't be around to take credit) and much much more. I am not a big on PVE, but it is not secret that former Director focused a lot of PVE content which turned out to be great (with House of Crom and T4 being the highlights of those years of development). He also more or less handled client issues and implemented Dream World system (so now AOC can benefit from TSW) Those are the reasons why new players that are coming to the game are stunned by it's quality and immesivness.

While PVP benefited a lot from all the new systems I have to say that PVP as a whole suffered greatly. The removal of groups from group pvp followed by Bori turned out to be a disaster. In all those years PvPers got Jab Sag minigame (all not that great in my opinion but still fairly popular due to it's rewards) and Blood & Glory setting (which failed pretty hard). I have to give Sillirion credit for listening to the feedback when it came to world pvp bosses and scraping the idea. I have no idea why he was turning away from pvp in a game that has such an amazing pvp potential.

Craig Morrison at first had amazing relations with the community but things turned sour around the time Bori got launched and he pretty much never recovered from that blow (at least in the eyes of vocal pvpers). Nevertheless he was always very professional even when people where directly insulting him.
The man has thick skin and balls when it comes to sticking to the plan, I will give him that. On the other hand I think often the community was too harsh and too hard on the Director and without doubt that drove him away from the forums (can't blame him for that).

So looking back at all those years I will say that Sillirion had a tough job and for the most part he succeeded. Often he suffered for the design choices he didn't make and the flaws/bugs he wasn't responsible for.

Apart from some pvp related issues he was the right man for this job and he soldiered on like a boss.

Thank you Mr. Morrison for all those years of toil and adventure. I know you did your best with the resources you had. Some will call you Craig "PVE" Morrison, but to me you are Craig "The Fixer" Morrison. May your blades never dull.
Posted by Slith at 8:31 AM

You make a lot of excellent points. A very well thought and insightful article.

It will always be a controversial topic, but I think crafting system will be best thing that will happen to this game and that is a credit to former GD

Well done. It is easy for people to forget the hardships the game has overcome since launch. Overall, Craig has done a great job with the game.

CM may have improved the game from when he took it over but he took FOUR years to achieve these relativly few changes.

Have you forgotten about the Year of zero updates while they developed the Dream Engine. What about end game encounters like Thoth and T4 being in the game but bugged for years before they were fixed.

This neglect caused thousands of players to leave the game.

Whilst we can thank CM for the relativly bug free code base we have today, we can also thank him for the bare bones population as well.

Magic exists in the game, but not in RL. He fixed what he could, just as he did with AO. AO's still cranking to this day and still a fine MMO by anyone's standards. And it's HUGE.

The population leaving may or may not be Craigs fault, direct or indirect, but I severely doubt it was his directly; games are driven by managers beholden to bosses who answer to owning companies who answer to share-holders. It's a fucked process that get's in the way of art to which I imagine AoC being a Monet with a busted frame and torn corners. Still a painting, just needs some luvvin'.

Maybe one day we will get Craigs and Joel's reports on how life in FC actually was.