Cunning deflection will mess you up

See the topic? I mean it, don't even fuck with cunning deflection! Let go over it right from the begining:

Cunning Deflection feat:
It is 15 points into soldier's general tree with 1/1 point investment. The feat's description:

here is what was happening to me: I was whooped by few soldier class players more than once - they have literaly beaten me to bloody pulp in matter of seconds regardless what I did...oh, wait, not really - fighting them was making things worst, I could dance and block their damage for quite a while. Being sad little noobie I never gave it much thought - I beat certain classes easly, soldiers can beat me right? Well no, things were too inconsistent, there were soldiers that I was taking down without much sweat. First I thought - it's gear, it's all about their epiXXXORZs and farmed PEEEVEEPEE itamz, but lvl70-something guardian that was beating me over and over changed my mind. The frustrating thing was that I wasn't losing to CC, or superiror combat movments - death was very sudden.
Finaly THE MAN aka Kamukoira opened my eyes with his [Soldiers] Cunning Deflectionthread.
He have posted screenshot where non damaging fear spell - The curse of the lotus - made soldier proc HELL on him in a form of cunning deflection. Check this: 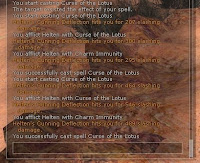 After reading that I went to my combat logs and saw all that damage procing on me, and not being dealt by the soldier player himself.
1/ Preloaded GC
In this screenshot I wanted to snare my opponent with preloaded GC which did whooping 318 DMG.
I got 1.379 DMG in return. My HP buffed with food is roughly ~3700, meaning I got down to 2/3 HP before the fight even started.

The above screenies are just crap I took in the minigame before posting this, and I wasn't even trying to make CD look so powerful, there are people who did that part for me:
.

Tests that were done:
Icoyce and Odinffs went out to test the crap out of cunning deflection and here are the screenies- one is for 12 hits proced from the DOT. DT that helped testing confirmed that all damage was done instantly. Hope FC works things out.