Because I want to do more than bitch and whine I have been doing my share on Test Live forums to help DEVs clean the game from the bugs.

I think that video material will help the Devs much more than just couple of words in the post so here is my report:

Video:
1/ First part shows that after respawn my HP is 0, I have pernament shield on me, can't attack, can't be attacked, can't log. It is third time this happened to me over period of 2 months. I have seen this affecting one other player

2/ Second part shows me getting under the map after being knocked back on the ramp. I think FC is already aware of that.

The screen shows Necro spellweaving behind the pillars in the halls minigame. If Necro was blocked by lets say guardian or BS it would be unkillable by melee. It took 3 of us attacking necro 1-by-1 to get him killed. Clearly it is an exploit. 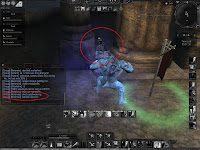