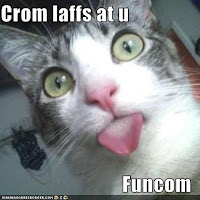 The VirginWorlds podcast collective did some more Age of Conan bashing (oh there is a shock). Our only media outlet - Hyborian Herald Podcast - died quite a while ago, but other members of collective came on AOC pretty hard in their yearly review (can't blaim them for that). Check out "Massivley speaking", "No prisoners, no mercy", and "Spouse aggro" for some good podcasts related to MMOs. In "Massivley" they had a part of the show called "new year predictions" and one of the host accualy made a prediction that AOC will go "belly up" in 2009 same way the Tabula rasa did in 2008.
On another subject - I kinda envy the Lord of the rings online crowd - apparently lotro is one of best mmos around and their new expansion is a killer. Too bad I am not a fan of lotro lore.. It kind of sucks when you play the mmo everyone (including yourself) shit on...Crom laffs at all of us..
Posted by Slith at 11:54 AM