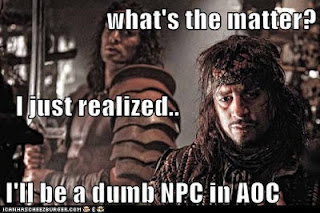 I am always looking over the horizon for what else Hyboria holds for us. Truth be told that Dragon's Spine REALLY took me by surprise as my initial guess was: Hyperborea (which SHOULD be made, damn it!). Supposedly it was possible to foresee the Dragon's Spine as artwork for this content was made back in ... 2009 ! Here is a thread to prove it.

Trying to see what the future holds for Age of Conan I have searched teh internets and came up with this: Undying Temple. The concept art for this content was created by Wanglin Fang who have prepared artwork for both House of Crom and Turan add-on. 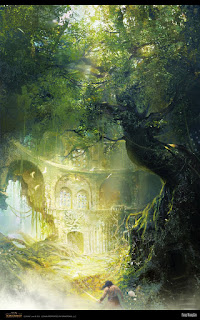 The artwork is from 2011, but since Funcom used 2009 paintings for SDS that doesn't really tell us how far away this content might be. I am not aware of any tie in to Conan lore that undying temple might have. I have noticed that the artwork is connected to Lemuria which is a kingdom from Kull's stories. Can't say I am pumped for this art since this kind of mobs reminds me of those LOTRO tree-walking-thingies. Just because there is an artwork for it doesn't mean that we will see undying temple anytime soon (if at all) considering that Dragon's Spine - a 2013 add-on - is based on 2009 artwork :X
I REALLY want the game to shift to the dreaming west as I am very weary of super natural. Sure, Conan stories have A LOT of super natural elements in them, but it's often more subtle and working the background. Right now in AOC one Lovecraftian monster chases another and the whole thing is so deeply steeped in that mythology that at times I am feeling like playing The Secret World (House of Crom and Dragon's Spine are guilty of this). I long for more military conflict, especially ones on the larger scale (like Hour of the Dragon which is about Nemedia invading Aquilonia). Pretty good example of content which has little to no super natural was Tarantia Commons, a rough place where low lifers tear each other apart. Butchering a members of the The Crows? I can get behind that more than solving a riddle about how to summon some cloud-a-like monster from the outer dark.

But there is a exciting thing on the horizon as Schwarzenegger gets another shot at Conan. Newer saw than one coming as it seems like something posted as an April's fool joke. Not saying that it will be bad, it is just very very unexpected. It is pretty obvious that Funcom will again jump on Conan movie wagon and will produce some content tied to it. The Turan add-on wasn't all that bad (Ardashir looks excellent and Iron Statues is the best solo content so far) but the CTB references (I hate that fat bastard Artus and cliche non-character El-Shan) were clunky, unnecessary and poorly written (DMH I am looking at you!). Fitting considering it was a bad content based on a bad movie.


Funcom will again have problems with fitting AOC into Conan: The Legend since CTB took place several years before AOC and CTL will take place several years after AOC. What gets me excited is a possibility for Aquilonian add-on for Age of Conan. My character hails from Aquilonia (hence Slith of Aquilona) and I have simply adored all leveling zones in Hyboria tied to the Aquilonian empire.Not much is yet known about CTL, but I have my fingers cross that it WON'T be about some Acheronian menace. Please, give the damn Acheron some rest..

I think it's possible Uncying temple could just be a different name for Forgotten City.

I guess to check it closer you would have to see if that statue is in there.

looks alot like the final boss room, with the quest head in that little room.

Look at the statue at the very top in this screen:
http://images.wikia.com/aoc/images/5/50/Nanjing_picture014.jpg

Looks like the same.. but would have to look closer ingame ofcourse.

hm... now that you have mentioned it it DOES look a lot like Lost City. There are "doors" in the big tree there just like lost city.

Aaaand overall theme of Lost City is a civilization that dind't quite die off which fits undying temple.

Well I, for one, won't be disappointed if it's true and undying temple won't ever get made :D