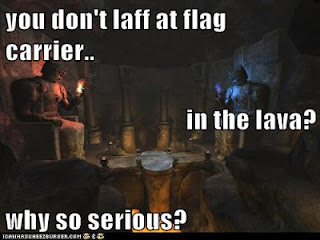 I have called this guide "lost temple tricks" for the lack of better term as there is hardly anything tricky or hard about performing the jumps shown in the video. However those jumps are "smart" way to move around the map as they will save you from Bruised Body and Broken Debuffs which are nasty movement debuffs. So the purpose of this guide is to show you how to stay fast, mobile and how to access places that were not meant to be accessed this way. All of this is legit and is present in the game since ever.

Opener Jump - this is the fastest way to start a minigame. Simply jump on the first step and jump further down. This is mandatory for flag carries that want to get to the enemy flag room the asap.

Spawn Jump - double tapping forward close to the wall will allow you to slide down. This is the fastest way to rejoin the fight.

Column Jump - a nice trick to escape your enemy and it can also be performed while caring the flag. Simply jump on the column and slide down to safety. Be careful about using this trick with accelerated buff as you will jump too high and get Bruised Body debuff. I haven't seen anyone using this and since I have came up with this one myself I am claiming it as my own. Didn't call it "Slith's jump" out of modesty for which, like many other things, I am famous for.

Flame Jump - straight forward jump. Can be performed while caring the flag.

Ledge Jump - this is one of two "tricky" jumps. To perform it you need good timing. You cannot be sprinting while jumping, this is not about speed or height of the jump, but about timing.

Soft Jump - Same as ledge jump. You cannot be sprinting while jumping, this is not about speed or height of the jump, but about timing.

Escape Artist - This is a quickest way of escaping the enemy base or chasing down the flag carrier. You will get bruised body if you attempt to do this jump without accelerated.

Spell Weave Jump - I am also claiming coming up with the idea for type of jump. However this is rather a gimmick than an usefull skill, but when you pull it off it makes you feel like a ninja. The idea is that casters will often stand in this spot as they will be safe from all except rangers. Anyone trying to reach the casters would have to go through rather lenghty ledge while under the rain of fire and CCs. This jump should be a total surprise to your opponent as you can land exactly next to him in mere 3 seconds.

Teleport Jump -This might cause people to accuse you of cheating as you will simply vanish after jumping down. The whole "trick" to it is based on a simple fact that both fall and environmental damage do not put you in combat. So pretty much that means that you can go into hide as soon as you hit the ground. If someone is chasing you and you will jump down and stealth he will not see that as assume some kind of teleport hack. Happened to me more than once.